Our Two-Sided Commission: Family and Kingdom

I have not been shy about expressing my frustration over not being able to rightly convey the Gospel of the Kingdom to my fellow Christians. And here's the thing ... once the Holy Spirit opens your spiritual eyes to "see" it, and you know how to "enter" it, you wonder how you missed it all those years during your walk with the Lord. And you wonder why others can't see it as easily as you do! But I believe that the Enemy throws every tactic of confusion and misconception into the arena of our communication, and we Believers end up misunderstanding each other.
I recently listened to an excellent YouTube video by Dutch Sheets, the Executive Director of Christ for the Nations. The title of the video was The Power of Ecclesia, and it captured every emotion and frustration and disappointment Mark and I have encountered in trying to communicate with other Believers about the importance of understanding the Gospel of the Kingdom, and why it is important that we DO it. But the video showed me so much more. It caused me to humble myself before the Lord and realize that the problem is not just that people won't accept it, or try to understand it, or walk in it -- but that our message has been misinterpreted by the Church. Everything we have said about the Kingdom has been true to Scripture, but how we delivered the message was wrongly perceived by them, and we played a part in that delivery. Let me see if I can lay it out a little plainer.... 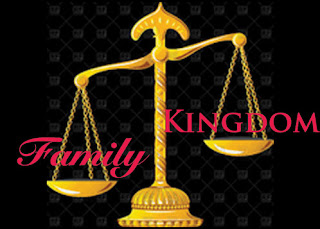 Jesus has given us a two-sided commission. The Body of Christ is to act as both an OIKOS, or House of God [think Family] and as an EKKLESIA [think judge and justice]. These two sides of our Commission are to act and work together to accomplish the Father's will "on earth as it is in Heaven". The problem is, the Body of Christ has been grossly out of balance, weighing heavily toward the Family side. We have largely represented Jesus as the Good Shepherd, the Groom, and our High Priest (this is the Family side of the scales}. And we have ignored His identity as King, Master, and Commander-in-Chief (the Kingdom side of the scales). Consider these few points in the equation (there are many more):

By now, you should be getting the idea. It isn't either/or, and it's not one versus the other. It's not denying one in favor of the other. We are to reflect both Family and Kingdom. And to be honest, sometimes we lump it all under one category called Religion/Church. And for the most part, the Body of Christ has gotten real good at being the sheep, growing congregations, praying, seeing Jesus as our Friend, asking Him for protection and provision, seeking the gifts of the Holy Spirit, and worshiping Him. We've accomplished that assignment. But we haven't accepted our roles as soldiers in His army; or expanding His Kingdom; or warring/binding/loosing; seeing Him as our Commander-in-Chief, our Victor, or our Sender; asking for the keys of the Kingdom or the weapons of our warfare. And we most certainly have not learned how to govern upon the earth.
But here is the important point I want you to get. In our zeal to explain the importance of the Gospel of the Kingdom, and the need to expand it and extend it not only among the Church, but among the nations, we are not saying or asking that the Family side of our Commission is wrong or that it is to be abandoned. But that is how some of the people in the Church interpret the message! No! We do not abandon the Grace or Mercy or Worship or Salvation messages. Those are all important and the correct message about our Lord. What we are saying is that this is not the complete picture of who we are to be as Followers of Christ. Along with Grace, we need to be walking in Truth ... along with Mercy, we need Justice, and when necessary, Judgment ... along with Worship, we are to Govern ... and by receiving Salvation, we are to Rule and Reign. It is a two-sided commission.
I want my fellow Believers to understand that when we promote Kingdom, we are not denying any of the components of Family. But if all we concentrate on is Family and a household, called the Church, then someone else will write the laws we live by. And we're seeing that in today's society! We can worship and praise Jesus all we want, but someone else will write the laws that govern us and the lack of Kingdom will be reflected in our culture.
We have to know when it's time to love one another and worship and teach and equip -- and we have to know when it's time to govern and go to war. We hear lots of talk about the Seven Mountains of Influence: Religion, Family, Education, Government, Media, Arts & Entertainment, and Business. We cannot influence those mountains from the Family side of our commission. That doesn't make the Family side wrong or bad! We just need to recognize that we have to do Family AND Kingdom in order to achieve real transformation in all peoples, nations, and tongues. It's not enough to act like His sheep; we must also act like His soldiers.
The bottom line is this: I have prayed to the Lord about why it's so difficult to be of "one mind" like the Church in the Book of Acts. I clearly heard that He cannot build His Ekklesia until we are of one mind about His Kingdom.  And He reveals His Kingdom in His Word, so the Book of Matthew is where to start in understanding Kingdom as Jesus taught it. I pray and war in the spirit that the Body will grasp their full identity as both Family and Kingdom Citizens. So I plead with you to diligently study Matthew and try to discern the difference between [and acceptance of both] the Biblical concepts of Family and Kingdom, and then ask yourselves if you are out of balance; where do you stand on your understanding of the Family of God and the Kingdom of God? We must come to a mutual understanding that both Family and Kingdom are essential to bringing Heaven's Kingdom to earth. Until then, the Body of Christ will be divided in their commission, in understanding His whole counsel, and in knowing their complete identity. Let's be all we are supposed to be!

2 Chronicles 30:12   Also the hand of God was on Judah to give them one heart to do that which the king and the officials had commanded by the word of the Lord.