"Stuck In The Middle With You"

If you are of a certain age, you will recognize the title of this song by Stealers Wheel. As the Holy Spirit was speaking to me about this blog post, I suddenly found myself singing some of the lyrics: Well, I don't know why I came here tonight, I got the feeling that something ain't right ... And I'm wondering what it is I should do ... Trying to make some sense of it all, but I can see that it makes no sense at all. Yes, I'm stuck in the middle with you.
I'm wondering if that's how Nicodemus might have felt when he sought out Jesus under the cloak of night. He knew that Jesus had some kind of connection to God because those kinds of miracles could only be accomplished by someone who walked with YHWH. The spirit in Nicodemus was stirred; there was something here to cling to. But what did it mean and what was he supposed to do with it? And trying to make sense of it all with his carnal mind was getting him nowhere. 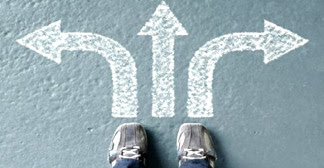 How many in the Body of Christ -- the Church -- are struggling with that same mindset? You see, I don't think we're really all that different from those in the First Century who struggled to make sense of the new message of the Gospel of the Kingdom that Jesus was bringing. They were stuck in the middle between their religious traditions and a new way to view their relationship with God. Furthermore, they couldn't see that there was a very real connection between the Law and the Prophets and the Kingdom of God.
Can we agree that everything taught in the Law and the Prophets [which is the Old Testament] point to the advent of the Messiah, the Christ? And what are laws all about anyway? Whether applied to the Bible or your own community, a law is a system of rules by which one is governed. Laws are part of government; you can't have a government without laws. The Kingdom of God didn't do away with laws; it just instituted them in a new way.
Then there is the matter of the Prophets. If there is a common theme among the Major and Minor prophets of the Old Testament, it is this: the Holy and Sovereign God called His chosen people to turn away from their old ways of sin and return to Him. But what did the people of the Old Testament do? They ignored God and continued to worship the idols they made. And that includes the religious leaders at the time of the transition from the Old to the New Testament. The Pharisees had made idols of their Laws and refused to recognize the Messiah in their midst.
Yeshua, the Messiah, was the conduit from the Old to the New. He was the instigator of an evolution of understanding; FROM the old government system of the Law and the warning of the Prophets to repent [physically turn away from sinful actions] TO the new government system of the Kingdom of God on earth and the new form of repentance that required one to turn from their old way of thinking to a new mindset, [the mind of Christ, Himself].
Remember, Jesus said in Matthew 5:17-20, Do not think that I have come to abolish the Law or the Prophets; I have not come to abolish them but to fulfill them. For truly, I say to you, until heaven and earth pass away, not an iota, not a dot, will pass from the Law until all is accomplished. Therefore whoever relaxes one of the least of these commandments and teaches others to do the same will be called least in the kingdom of heaven, but whoever does them and teaches them will be called great in the kingdom of heaven.  For I tell you, unless your righteousness exceeds that of the scribes and Pharisees, you will never enter the kingdom of heaven.
What did He mean by that? Could it be possible that He expected all the laws that are explained throughout the Torah to be in existence today? If you've ever considered all the instruction given in the Bible regarding government, it is hard to think that's what He meant. There are laws regarding citizenship under the Theocracy of God pertaining to slavery; taxation, military laws [age of soldiers, cleanliness in camp, regulations in battle, plunder, etc]; criminal laws; laws pertaining to domestic relations; real estate laws; contract laws; religious laws; laws pertaining to legal procedures such as judgments, appeals, damages, and much, much more. Yet, He said, I didn't come to abolish the laws but to fulfill them.
That was a stumbling block for many of those who heard Him around 33 AD. And it's a stumbling block still today. But here's what I think He meant... Both the established laws in the Old Testament and the words of the Prophets originated with God. From Moses, to the Judges, to the Major and Minor Prophets, we see God as the Authoritative Ruler of His people. In the Old Testament, God is laying the groundwork -- a foundation, if you will -- for a change in direction of how He will govern when He sends His Son, Jesus Christ.

Jesus announces this transition when He proclaims, The Law and the Prophets were until John; since then the good news of the kingdom of God is preached, and everyone forces his way into it.  Jesus is marking the end of one government system and announcing the commencement of a new government administration -- one that must force the old religious framework of government aside. As author Ed Silvoso writes in his excellent book, Ekklesia: Rediscovering God's Instrument for Global Transformation, "It is not possible to proclaim the Gospel of the Kingdom using the old paradigms, because the Law and the Prophets announced in the past, that something was going to happen in the future, whereas the Gospel of the Kingdom focuses on the present -- the here and now."
Jesus said, Repent [renew your mind], for the Kingdom of God is at hand [is present; has arrived].  I will grant you that the complete fullness of the Kingdom of God will not permeate the earth until He returns in His Glory, but Jesus said that "it was in their midst". It was present then, and it is present today. But the religious people of Jesus's day were stuck in the old paradigm and could not make the transition to a new form of government and a new mindset. And I see the same problem of being "stuck in the middle" among many of my fellow Christians.
Please read my following words knowing that it is not my desire to offend or wound ... but I worry that too many Christians are focused on what God accomplished for us in the past (Christ's death on the Cross) -- as glorious and triumphant and beneficial to us as it was -- and what He will do in the future (return in His majesty to defeat evil and establish justice and peace on the earth). But that leaves far too many stuck in the middle, trying to make sense [in the present] of the relevancy of the Gospel of the Kingdom in their lives.
That leaves Believers either concentrating on their worship in the building and their traditions and rituals [looking backward to the Cross]; or focused in expectation, waiting on what they think will only happen in the future. Either way, they remain at a spiritual standstill, unable to realize that what has been prophesied in the past, and what Jesus declared, is here in our midst; it is a present reality. The consequences of being stuck in the middle is that we are not doing what Jesus came to inaugurate... we are not taking back our dominion of the earth and advancing God's kingdom on earth.
Instead, we may find ourselves part of a large group of inactive Believers, locked into a dormant religious system, waiting for Jesus to appear in the clouds and take us "home". And I get it ... this idea of my role in the Kingdom of God has me asking many questions of God. What is Your purpose, Father, for our little Home Church? If we try to make the transition and become a legitimate ekklesia, which is what Jesus said He was building, what does that look like? Even a small Home Church/Ekklesia can be stuck in the middle! And, I will tell you that even John the Baptist struggled with the transition. He sent messengers to ask if Jesus was the one to come, or should they be expecting someone else? But at least John was not willing to stay stuck. He wanted answers! And Jesus sent back His answer: Tell John what you see and hear ... the blind are receiving sight, the lame are walking, the lepers are cleansed, the deaf hear, and the dead are raised, and the poor [in spirit] have the gospel [of the good news of God's kingdom government on earth] preached to them. What you've been preaching about and looking for, John, is here now, and in the present!

We must be willing to receive the reality and fullness of that same answer. We know the living Christ, the Messiah, is in our midst now. But we must "get unstuck" and do what He told us to do. We must seek the Kingdom, understanding that we have a role to play in God's government here on earth. Then we must become the Ekklesia (ruling, legislative body) that He said He would build. We must fast for spiritual strength and wisdom, and then contend with prayer that is powerful enough to accomplish what He declared to be His will.... that we would confront and prevail against the Gates of Hades now, in the present, until there is a transformation on the earth among all peoples and nations.
Jesus didn't just come so that we would build our faith upon religion that tells us what He did in the past and promises what He will do in the future. He came to show us what He was building as His provisional government -- that kingdom government that would occupy the earth between the Law and the Prophets and His Return. He told us to share the good news that Heaven's form of government was now the world's, and He showed us how to validate that message with signs and wonders, and He said He would always be with us as we transform this earth, storming the gates of oppression and torment erected to stop the advancement of the kingdom. None of that sounds like we're to be stuck in the middle! Does it to you? As the Body of Christ, we must find a way to push past our passive mindset and static position to become a Body, not only capable of storming the gates of Hell, but convincing the Enemy's hordes that we are more powerful than his opposing forces. We can no longer be stuck in the middle!

Isaiah 9:7     There shall be no end to the increase of His government and of peace, [He shall rule] on the throne of David and over his kingdom, to establish it and to uphold it with justice and righteousness from that time forward and forevermore. The zeal of the Lord of hosts will accomplish this.

Email ThisBlogThis!Share to TwitterShare to FacebookShare to Pinterest
Labels: Gospel of the Kingdom, Kingdom of God, The Ekklesia