What In The "World" Did He Mean?

Forgive me, but today I have my hermeneutical hat on and I'm digging for treasure. In this day of "political correctness" and watching what we say so that we're not misinterpreted, I am often perplexed by our English language. This becomes an issue when reading our Bibles and trying to understand what Scripture is actually saying; especially when there are multiple Hebrew or Greek words used for our one English expression. For example, even the word "Word" has more than one meaning in the Bible, and the distinction is substantial. There is the rhema word; an inspired thought or creative idea from God, conceived in your spirit, but birthed into your natural understanding by divine illumination. You just know that your understanding has been revealed by the Holy Spirit! The logos word is the revealing and understanding that Jesus Christ is God; having been both presented to man and known by man.
But the word I'm interested in today is the word "world" as it was used by Jesus. If you asked any person on the street in America, whether a Believer or not, what that word means, you would probably get a simple one word definition: earth. But in the four Gospels, Jesus uttered "world" 91 times, and there were three meanings attached to the one English word "world". According to Strong's Concordance, He used the Greek word kosmos 78 times, the Greek word aion 12 times, and the Greek word oikoumene only once.
I want to make it clear that I believe and understand that all the words in the Bible are God-inspired and important, and I am not attempting to divide the word according to black or red letters. But in this day and age when our physical world is shrinking, and our words seem to have a greater consequence than ever, I wanted to examine some of the most important words spoken to us by Jesus and see if how He used the word "world" might impact us. 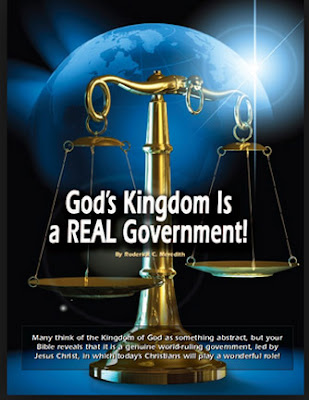 John 3:17   God did not send His Son into the world to judge and condemn the world, but to be its Savior and rescue it [so that they should live by His hand of power]!

Email ThisBlogThis!Share to TwitterShare to FacebookShare to Pinterest
Labels: Gospel of the Kingdom, Kingdom government, Kingdom of God