Have We Neutered God? We Can't Ignore The Lord of Hosts!

Please don't be offended by the title of this blog post. It is not intended to be a witty or clever way to gain your attention. Rather, it is a very real question that must be asked in light of the condition of the world under the stewardship of Christians and "the Church". Let me explain.
Any serious student of the Bible knows that names are important; they have meaning and power, and are prophetic. The name Abram means "exalted [or high] father", but God changed his name to Abraham, which means "father of many". The name Daniel contains "el", generic for god, but means "God is my judge", indicating that the God who revealed himself to the Israelites is Daniel's judge. Again, that same God is revealed in the name of Elijah, [containing both "el" and "jah", or "yah", a shortened version of Yahweh], and means "My God is Yahweh".
In the same way, God reveals His character and how He wants to be perceived and experienced through the names He goes by. And He is known by many names in the Bible. But when Moses asked Him [in the burning bush] who he should say sent him to the Israelites, the answer was, "I am has sent you". From that moment a tradition was born that His name was too sacred and divine to be uttered. So YHWH, [or Yahweh, or Jehovah] became the accepted name for God, speaking of His immediacy and His presence. It appears in the Bible over 6500 times according to the Jesus Film Project, an organization founded by Campus for Crusade founder Bill Bright.
I honestly don't know the exact number of names for God in the Bible, but I see over 20, and the ones we are most familiar with include Jehovah [Lord], Adonai, [Lord, Master], El Shaddai [The Lord Almighty] and Jehovah Shalom [The Lord is Peace]. But there is another name that is important to remember and know. It is Jehovah Sabaoth, or The Lord of Hosts. This is the character of God that we most desperately need to recognize in today's world environment. 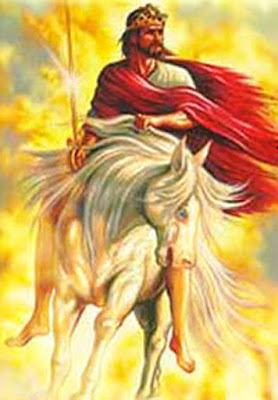 Micah 4:4    Each of them shall sit [in security and peace] under his vine and under his fig tree, with no one to make them afraid, for the mouth of the [omnipotent] Lord of hosts has spoken it.

Email ThisBlogThis!Share to TwitterShare to FacebookShare to Pinterest
Labels: Lord of Hosts, Names of God