The Good News of The Kingdom of God

I know it may seem as if I'm belaboring the point of the Kingdom, but I do not think the Body of Christ has a firm grasp of how important this matter is to God. Has it become clear to you that all the parables Jesus teaches in Scripture pertain to the Kingdom? Or, like me [before my spiritual eyes were opened], perhaps you assumed they were moral lessons that we are to learn to become better Christians. But, in my case, that belief came from an immature understanding of the "big picture" the Bible presents.
For far too long, I accepted the Church's organized and religious versions of what God wanted to tell me through His Holy Word. And it wasn't until I began my own earnest study that some of those teachings and doctrines fell short, if not exposed as downright corrupted. Let's start with the Book of Genesis. It is more than the Sunday School stories we were taught on the Creation of the World, the Fall of Man, Cain and Abel, Noah and the Flood, Abraham and Isaac, Jacob and Esau, Joseph sold into slavery, and the proliferation of the Twelve Tribes of Israel. Yes, Genesis reveals all those important stories, but there is so much more! The very core of Genesis is based on God's plan [from the beginning] to make Earth an extension of His Kingdom in Heaven. And He intended for His creation [man] to rule and have dominion over the earth by establishing His Kingdom principles. Man was created to be in authority over God's creation.
But as Scripture tells us, Man relinquished that authority to Satan in the Garden. It has been God's design ever since to restore our rightful authority and dominion. God intended to rule Earth through our leadership. We were created to be second-in-command under the Rulership of the Triune God.  From that first rebellion in Genesis, God has planned for us to re-discover not only His purpose, but ours, and to reclaim our inheritance as sons and daughters of God. 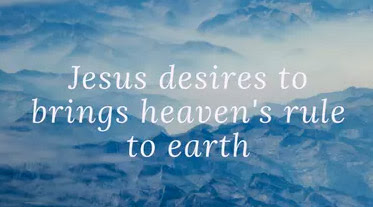 Here is the one thing that I believe those of us of the Christian faith need to come to terms with: Jesus did not come to establish Christianity or the Christian religion. He came to restore the Kingdom of God to earth! Everything that Jesus said and did during His three-year ministry came from the Divine instructions of the Father. He only said and did what the Father revealed to Him. His ministry reflected His passionate desire (and the Father's) to establish the Kingdom of God in men's hearts so that they might influence all aspects of the earth.
But remember, the fact that God is sovereign over His Kingdom, and we were created to administer His Kingdom here on earth, indicates that we live under His rule and His reign. The effect of His Kingdom touches our body, soul, and spirit and is able to heal, transform and renew every part of us. But His Kingdom is not designed to just effect our physical body or inner man. We are supposed to be shining examples of what a Kingdom citizen looks like. And I mean "shining" in the sense that the light of Christ and the Holy Spirit is evident in all we do and say. And it's all really simple. In fact, Jesus said, "Whoever does not open their arms to receive God’s kingdom like a teachable child will never enter it.”
When you think about it, He has given us everything we need to enter the Kingdom ... 1) His Word, reveals what Kingdom living looks like, along with our responsibilities as citizens of the Kingdom, and includes the blessings that come from entering into the Kingdom. Jesus presents all that relevant information in the four Gospels of Matthew, Mark, Luke, and John. 2) He has given us the Holy Spirit as our Guide, Counselor, and Teacher to help us stay on track and keep us focused on the Kingdom. 3) He has given us a goal to reach: Seek the Kingdom first, and His righteousness. Then ALL our earthly needs will be met.
Yet, I fear that too many of us look at other things first before we ever consider the Kingdom of God as our priority .... we look at our families, our jobs, our positions in the Church, our positions in the world, our finances, how other people see us, and anything that makes us feel good about ourselves. But Jesus is our King, and our loyalty must first be to Him. We cannot say, "Lord, I will follow you and represent Your Kingdom, but first let me ______".
The Good News of the Kingdom is that once we enter into the Kingdom through the doorway, which is faith in Jesus, we have entered a new country; we have a new homeland. We are no longer citizens of the United Citizens, but are residing in the Kingdom of God. We are then commissioned as ambassadors and representatives of His Kingdom government, and our assignment is to help others find the doorway, too. That's what Jesus did! Yes, He performed signs and wonders, but the purpose of them was to bring the Kingdom of God [and His access to its resources] into view so that everyone He met would "seek the Kingdom" and desire to enter it, too.
As citizens of the Kingdom, we have full rights and access to the resources of the Kingdom. Jesus showed us that when He confidently expected there to be enough food to feed the five thousand. He knew His Father's Kingdom was one of plentiful provision. He knew that as long as He tended to His Father's business, all of His needs would be met. Today we read that story and call it a "miracle". To Jesus, and Kingdom-minded citizens, it is an expected development.
The Good News of the Kingdom is that healing, deliverance, provision, mercy, love, and grace [among many other rights of Kingdom citizens] are all parts of God's system of Kingdom government. They are the privileges of every person who enters the Kingdom through the door of Jesus. They are not end goals within themselves, but benefits of understanding who we are and our position within the Kingdom. It is exactly because we move beyond the door of Jesus [and our "born again" experience] that we can mature and grow as true sons and daughters of the King and take part in this increase of God's Kingdom on earth.
And as children of God, it is important that we not only seek His Kingdom, but His righteousness, as well. We need to know His mind and His heart; begin thinking like Him so that we can be instrumental in seeing His righteous will done here on Earth. I have such a longing to know more of the Kingdom and my role in it. I have stepped through the door that is Jesus, and now I want to know how I can be a good citizen of the Kingdom. What is the best way I can serve my King? How does He want me to share the news of His Kingdom? Am I hearing my assignment correctly? I don't want more of religion or church-y systems. I want to walk boldly and confidently in His Kingdom system! And I know any and all news about the Kingdom is "good".  But, Lord, I am asking you to reveal my next steps, and I pray that my Kingdom walk serves Your purposes, not my own. I thank you for drawing me into Your Kingdom. Now, help me to be worthy of my citizenship, as I seek you with all my heart.

Revelation 11:15       ... The kingdom (dominion, rule) of the world has become the kingdom of our Lord and of His Christ; and He will reign forever and ever.

Email ThisBlogThis!Share to TwitterShare to FacebookShare to Pinterest
Labels: Gospel of the Kingdom, Kingdom Living, Kingdom of God