"There The Vultures (Eagles) Will Gather"

As I have stated numerous times [and in the preceding blog post] I believe the Holy Spirit truths of the Bible are Spirit-revealed as we diligently dig into the Word to really know our God. And so, as I'm involved in a Bible study on the Book of Matthew, I found my spirit examining the passage in Chapter 24 that describes the detestable idol erected in the Holy of Holies that brings judgment from God upon mankind.
Historically known as "the Abomination of Desolation, as spoken of by the prophet Daniel", I could focus on the events of this offensive, unholy, and frankly, beastly, sacrilege in the Temple. But I want to look at the culmination of this desecration, and the curious verses that describe the consequences ... For as the lightning comes from the east and shines as far as the west, so will be the coming of the Son of Man. Wherever the corpse is, there the vultures will gather (Matthew 24:27-28).
If you're like me, you have the obvious understanding of verse 27; that is, it describes the appearance of Jesus at His Second Coming. But what does it have to do with verse 29 and the statement about corpses and vultures? Does the Bible mention this anywhere else, and does it give us more clues as to the "bigger picture" of this future time that Jesus tells us we should understand? In fact other versions of the Bible tell us we should "take notice and ponder and consider and heed; learn about" this Abomination of Desolation and what will follow.
As a matter of fact, Luke also writes [in Chapter 17] about the "Son of Man's day" in which "the lightning flashes and lights up the sky from one side to the other".  While Luke doesn't focus on the detestable event in the Temple, he does describe what it will be like "in the days of the Son of Man"... it will be just as it was in the days of Noah, when the flood came; and as it was in the days of Lot, when fire and sulfur rained from heaven and destroyed them all -- "so will it be on the day when the Son of Man is revealed."
Luke then goes on to describe something that I propose has been misunderstood. Luke cautions them to "Remember Lot's wife. Whoever seeks to preserve his life will lose it, but whoever loses his life will keep it.  I tell you, in that night there will be two in one bed. One will be taken and the other left.  There will be two women grinding together. One will be taken and the other left.”  These verses are often used in conjunction with 1 Thessalonians 4:16-17 which describes the Lord descending from heaven with a shout and command and the faithful will be caught up in the air with Him; i.e., the Rapture. But both Matthew and Luke refer to the corpses and the gathering of vultures, which the Rapture passage in 1 Thessalonians does not mention. So let me explain why I think there is more to discern about "the day of the Son of Man" that has been misunderstood in Matthew and Luke, and why I do not think it refers to "the Rapture". 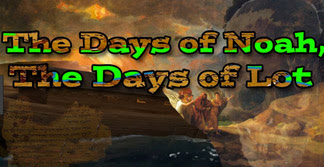 First of all, as I have already stated, the passages in Matthew and Luke are prefaced with accounts of grievous sin ---1)  the desecration of the Temple ("his forces shall pollute the sanctuary, the [spiritual] stronghold [Temple], and shall take away the continual [daily burnt offering]; and they shall set up [in the sanctuary] the abomination that astonishes and makes desolate [probably an altar to a pagan god]" -- Daniel 11:31);  2) the grievous sins in the days of Noah ("The Nephilim were on the earth in those days, and also afterward, when the sons of God came in to the daughters of man and they bore children to them" -- Genesis 6:4); and 3) the serious sins in the days of Lot (" just as Sodom and Gomorrah and the surrounding cities, which likewise indulged in sexual immorality and pursued unnatural desire" -- Jude 1:7).
And what were the results of these sins against our holy God? In Noah's day, God said He would destroy man with the earth (the Flood). In Lot's day, it was a righteous punishment of sulfur and fire from heaven. And, in Matthew, what does Jesus tell us will happen when the Abomination of Desolation [that occurred in Daniel] happens in the End Days? He gives lots of instructions about the people who will be living in Jerusalem at that time. And then He speaks of a time of "great tribulation" and a time of "false christs and false prophets [who] will arise and perform great signs and wonders, so as to lead astray, if possible, even the elect." Then comes the declaration of the "coming of the Son of Man" and the verse about those corpses and the gathering of vultures. It all sounds like JUDGMENT to me!
Furthermore, I think it is important that we consider that the reason Jesus mentions the "Son of Man" is that it is His title pertaining to His taking back the dominion of the Earth (remembering that man was given dominion of the earth in Genesis 1:26). And here's a possible understanding of why He follows that sentence with "Wherever the corpse is, there the vultures will gather" ... it is to be found in Matthew 16:27: "For the Son of Man is going to come with his angels in the glory of his Father, and then he will repay each person according to what he has done." In both Matthew and Luke, the references to His appearance tell us He will be coming in judgment, and the result will be similar to the judgment in the days of Noah and Lot. Hence the bodies and vultures that will gather. These verses are not to be confused with His coming mentioned in 1 Thessalonians, which is addressed to those who "believe that Jesus died and rose again" (1 Thessalonians 4:14). In Matthew and Luke, the Bible is speaking about [and to] wicked and evil people. In 1 Thessalonians, it is a message of hope and encouragement to Believers. That is why there are no corpses and vultures. 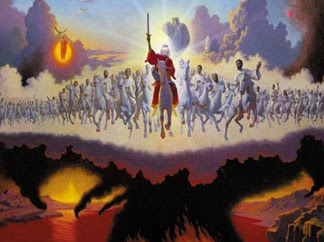 Remember that Matthew and Luke are speaking of how the coming of the Son of Man compare to similar events of wickedness. The confusion and misunderstanding comes from Luke's reference to "One will be taken and the other left" being united with 1 Thessalonians 4:17, "Then we who are alive, who are left, will be caught up together with them in the clouds to meet the Lord in the air, and so we will always be with the Lord." Matthew and Luke clearly show that they are referring to a time of judgment, while 1 Thessalonians is clearly about the Rapture. The "taking and leaving" in one do not support those who are left in the other.
And in case you are interested in considering more, take a look at Job, chapters 38 and 39. God challenges Job to consider His Sovereignty and His Judgment. God counsels Job on the character of arrogant and bold sinners. When they have their hearts set on evil, there is no making them fear the wrath of God. They think they are safe in their sins ... and God describes the near lust for battle that comes upon evil men upon the earth as they go out to "meet the weapons". Yet at the end, what is the picture God paints for Job? He describes an eagle mounted high in her nest and stronghold, spying out his prey. "His young ones suck up blood, and where the slain are, there is he". And are you aware that in many versions of the Bible, "vultures" in both Matthew 24:28 and Luke 17:37, is translated as "eagles"?
Maybe you are not perplexed by that curious verse in Matthew 24. Maybe the fact that it immediately follows Jesus describing the coming of the Son of Man doesn't seem unusual to you -- it is just another of those unfathomable mysteries of the Bible. But it is just so glaring to me, and in opposition to what I've been taught and understood in the past -- that the Coming of Jesus meant the Rapture -- it just didn't make sense. So, you may not agree with my interpretation of Scripture, or how I related Matthew and Luke's coming of the Son of Man with Judgment, whereas the coming of the Lord in 1 Thessalonians is actually refers to the Rapture. That's OK with me. I just hope that you find it worthwhile to dig deep into the Bible. I believe the Bible is the inspired Word of God, and that the Holy Spirit inspires us to dig in; to read and reflect; to connect the dots; and then be willing to accept the truth that our study reveals -- rather than rejecting it because it does not conform to our prior understanding or human wisdom. Let us be motivated and energized by the Spirit to love earnest and enthusiastic study of God's manual for godly living and spiritual warfare. And let us never seek to minimize His glory or His Kingdom by limiting our understanding of Him. Let us forever declare His Kingdom and His Power and His Glory!

1 Corinthians 2:4-5     The message I preached and how I preached it was not an attempt to sway you with persuasive arguments but to prove to you the almighty power of God’s Holy Spirit. For God intended that your faith not be established on man’s wisdom but by trusting in His almighty power.
Posted by Pam Kohler at 6:30 AM