God's Plan For The World

At this time of year, it's hard not to reflect on God's plan to send a part of Himself to redeem the world. And when I think that He appeared as an innocent baby to "the lost sheep of Israel", and that I have benefited from their inability to recognize Him, I am overcome with gratefulness and thankfulness. Yet I know that He is not done with His chosen people and that one day His mercies will be new upon them when the full number [who will receive Jesus as their Messiah] will be saved; when they once again operate in the full power and character that God has bestowed upon them; and when they enter into their full purpose of leading the world to faith in the One True God.
I remember the first time that the Word made this clear to me as I read the Book of Romans. I suddenly saw God's plan in its fullness -- His plan for both "the Jews" and "the Gentiles", and my role in that plan. And let me be clear, I know that, as a Christian, I have been grafted into God's plan, and it is His desire that everyone on earth be included. At this time of year, the world needs to remind themselves of how simple God's plan really is. In a nutshell, God created and destined the world to be perfect in His sight, so that everything would reflect His goodness and bring Him glory. There it is, it's that simple! 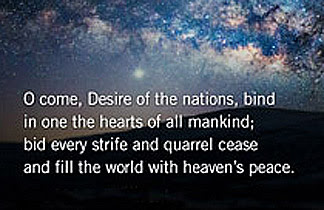 Furthermore, when He created you and me, He saw us in our perfect fullness, as He meant us to be. And even now, when I disappoint Him because I fail to walk in my full potential, He still sees someone worth dying for. He still sees me as He meant me to be! That thought should stir the spirits of everyone reading this! And I don't know about you, but it makes me want to be that perfect self I was designed to be. But how do I/we get there?
The one thing we all need to understand is that to get to the point where we truly reflect His goodness and bring Him glory, it is a reality that [in our human condition] we will experience the ups and downs; successes and disappointments; joys and heartbreaks of this life. And we should never lose sight that Jesus is there with us through it all. If we stay focused on Him, we should grow in our knowledge of who God is, who we are in Him, and in the process, become more and more like who He created us to be.
It is God's plan to bring us into our full potential -- not to be who the Enemy or the world tells us we are. When He sent the part of Himself that is Jesus, He personally came to show us how He sees us; where we are falling short of His glory; and to redeem us from everything that separates us from Him... including our uniquely individual human natures, our past, our family iniquities, and the lies of the Enemy to steal, kill, or destroy our God-given identities.
And I think that Christians really need to know what that word redeemed means -- to gain or regain possession of (something) in exchange for payment. And then we need to understand just how big that payment was! Can we even wrap our human minds around the magnitude of the suffering Jesus endured as He paid the penalty for all the sins of all mankind for all time??? God willingly did that for us! And in the process implemented a way for us to once again reach that full potential of who we really are.
But here's the thing.... His plan is even bigger than you and me! Throughout the Bible, God's Word tells us of His plan to redeem nations as well as peoples.... I will be exalted among the nations, I will be exalted in the earth! Just as God created each of us to be perfect in His sight, He had the same plan for nations. Can you imagine what our nation would look like if we were walking in His original plan for us? It may be hard to accept, but God created every nation with a specific calling. Even though our history books explain only the works of man that have resulted in the conditions of nations, God has always been involved.
I know it's hard to believe there is a calling on our country when we look at the corruption in our government, the numbers of abortions, the confusion over sexual morals, and the decay of the family. But if God has created this nation (as Christians believe), then He has a calling on it. God has not given up on us. He is working our redemption through the believing remnant in this nation and every nation on earth that calls Jesus King.
And that brings us back to this season we know as Christmas. Remember that God came to the "lost sheep of Israel" to redeem them as His chosen people among the nations. But there was a plan, and it is still being played out. And I have never heard it explained any better than these words from Tal Haroni, a Messianic Jew in Israel: "God wanted to have all nations in His Kingdom. He never wanted anyone left out. He wants everyone to see and experience His glory. So first, He showed who He is to Israel, and then at the right time He opened the way for everyone else. But the people of Israel had to be “hardened” in order for each and every nation to discover God. Now, it’s all coming back – the nations, the Gentiles, as they begin to enter into the fullness of their redeemed cultures. As they walk in their God-given fullness, they call the people of Israel back to their God-given calling. When the nations reflect God’s goodness, the people of Israel can be redeemed, too. This is how we will see the world fully redeemed, and walking in its full potential as God intended it to be".
In this season, let us give thanks for the plan of God to redeem the world. It began with Israel, and by His grace and mercy, we have received redemption through them. Pray for God's plan to be completed through you and me, as we reflect God's goodness and glory, resulting in God "grafting Israel in again" (Romans 11:23-24). Praise be to our Glorious and Merciful God who loved the world so much that He sent His Son, that whoever believes in Him shall not perish, but have eternal life!


Romans 14:11     Just as it is written: “As surely as I am the Living God, I tell you: ‘Every knee will bow before Me and every tongue will confess the truth and glorify Me!’ ”