We Are Covered By The Blood of The Atonement

As we contemplate the Fall Feasts of the Lord, I want to consider the Day of Atonement and its significance for us New Testament Christians. There are so many theological theories of what  "the Atonement" is -- it was a "ransom sacrifice" paid for Christ; Jesus suffered crucifixion to satisfy justified wrath against man's transgressions; the purpose and work of Jesus Christ resulted in a moral change in humanity due to the inspiring effect of His teachings, martyrdom and resurrection; Jesus is seen as the new Adam who undoes what the original Adam did, leading humankind to eternal life; and finally, the scapegoat theory that Jesus took on our sins and unfairly suffers the consequences -- all of which touch on what Jesus did to atone for our sins and reconcile us with the Father. But why did God institute the Day of Atonement and how was it to effect and provoke the Israelites and us?
Both the Spring Feasts and the Fall Feasts are "dress rehearsals" for God's appointed times in His plan of redemption for mankind.
The Spring Feasts mirror His death, burial and resurrection, along with the giving of the Holy Spirit.  The Fall Feasts mirror His Second Coming.  This week's Feast of Trumpets is a dress rehearsal for His return and the rapture of the Church.  The ancient Israelites celebrated this day as the beginning of their civil new year, and they gathered together to praise God for His renewal. 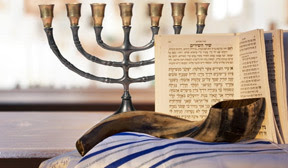 The Feast of Trumpets also began 10 days of celebration as the people prepared themselves with fasting and prayer to hear their verdict on the Day of Atonement (Yom Kippur).  This ritual trial reached its conclusion when the people finally dropped all their defenses and excuses and threw themselves on the mercy of the heavenly court, yet the same people never lost the conviction that they would be pardoned. This atonement was by divine grace; it was above and beyond the individual's effort or merit.  The Day of Atonement was a gracious day each year when all the Israelites could experience a new beginning by being cleansed from their sins and restored to fellowship with their Maker.
The Old Testament significance of this Feast Day is understood by remembering that the Israelites performed daily animal sacrifices in which the animal's blood was brought into the Holy Place for sprinkling against the veil and upon the horns of the altar of incense. This served to symbolically transfer into the sanctuary the sins which had been paid for (by the death of the animal). There the sins remained [for a whole year] until the Day of Atonement, when the sanctuary was cleansed of the accumulated sins of the people.
The blood of the sacrificial animals served as a substitute for the Sinner who offended God.  But this blood offered for repenting sinners defiled the sanctuary, because it was used to symbolically carry their sins into the sanctuary where they were kept until the Day of Atonement.  God’s Sanctuary needed to be CLEANSED on the Day of Atonement.  Imagine the smell of all that blood upon the altar for a full year!
The ten days from Trumpets to the Day of Atonement were known as "the days of awe" and the people considered very carefully what sins would be held against them when GOD settled accounts.    Jewish tradition says that on this future day GOD will enter the righteous in the Book of Life and the wicked in the Book of Death.   For  those in between, the verdict remains open during those 10 days. Will they decide for God or against Him? Will they confess and repent for their sins, or continue in rebellion?
If we believe these Feasts are to be considered dress rehearsals for Christ’s Second Coming, then after the blast of the last heavenly Trumpet, and Christ first appears, there will be 10 days until the Bema Seat of Judgment where we will stand in God's presence and hear an accounting of how we lived our lives for Him and His Son.
The significance of this day (Day of Atonement) for us New Testament believers is that God loves us SO much that He has even given us the day we should fast, pray and seek His face before we have to stand in front of Him, face-to-face.   Yet, like the ancient Israelites, if we belong to Him, we can rest in the knowledge that Christ is the Sacrificial Lamb that paid the price for our sins, and we will be pardoned.
This year, the Day of Atonement begins at sundown on September 19th, and ends at sundown on September 20th.  We can come together with other believers (Holy Convocation) for a day of complete fasting (examine our souls). What better time to do this than on the one day each year that our Heavenly Father has instructed His people to do so?
It’s also a good time to intercede and appeal for mercy on behalf of ourselves, our family and friends, and our Nation/Community. We see this in the story of Jonah –Jonah was sent by God to Ninevah, a wicked murderous nation to warn them of impending judgment. We see that they humbled themselves (fasted) and turned from their wicked ways and because of that, God spared them. He is so good to provide a warning before judgment!
But there is still such a large harvest to bring into God's storehouse! It is our responsibility as representatives of God's Kingdom on earth to not only spend the days between the Feast of Trumpets and the Day of Atonement to pray and fast for our own lives, but to intercede on behalf of others who are yet to know Christ. I don't want to ever hear someone say, "Nobody told me!"
So, Lord Jesus, I thank you for the redeeming work of the Cross and what it means for my life. I look forward to Your return and I commit to spending these next days in humble prayer, examining my life and praying for cleansing, redemption and restoration. I fully expect my name to be written in the Book of Life and I praise you, Father, for Your love and Your faithfulness towards me. I will truly live these next days in awe of all that You have done in my life; all that You are; and all that You will be when I stand before You. I want to live my life as if every day was the Day of Atonement; ever mindful that I have so much to be thankful for.

Leviticus 23:27  Also the tenth day of this seventh month is the Day of Atonement; it shall be a holy [called] assembly, and you shall afflict yourselves [by fasting in penitence and humility] and present an offering made by fire to the Lord.
Posted by Pam Kohler at 6:30 AM

Email ThisBlogThis!Share to TwitterShare to FacebookShare to Pinterest
Labels: The Lord's Feasts