The Fall Feasts: Why Christians Should Pay Attention

This Sunday evening at sundown will be the beginning of the Jewish holiday Rosh Hashana, or the Biblical Feast of Trumpets. Ten days later [on September 19] will be the celebration of Yom Kippur or what the Bible knows as the Day of Atonement, followed five days later [on September 24-30] by Sukkot, or the Feast of Tabernacles.
Several years ago when I began studying the implications of these Biblical feasts, few of my fellow Christians were aware of them or their significance for New Testament followers of Jesus. I am happy to say that this is changing, and more Christians are seeing the relevance of the Lord's Feasts as they pertain to our faith. God established His Feasts as a memorial to His faithfulness throughout history to the nation of Israel as His Chosen People, and to all people who would believe in Him through all the coming generations. That includes us.

What are known as the Spring Feasts (occurring in March-April of each year) have already been fulfilled; the first two by Jesus Christ on the actual feast days according to the Hebrew calendar. He was sacrificed on Passover, and resurrected on the Feast of First Fruits. The third Feast of Unleavened Bread carried great significance in light of His sinless life and His sacrifice, while the fourth Feast, Shavuot, or the Festival of Weeks, was again fulfilled on the exact day on what we now call Pentecost. As Christians, these Feasts are a time for us to commemorate what Jesus accomplished at His First Coming. 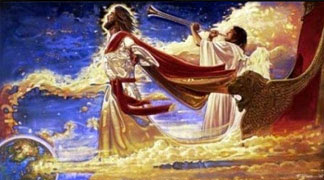 Numbers 29:1    On the first day of the seventh month, you shall have a holy [summoned] assembly; you shall do no servile work. It is a day of blowing of trumpets for you [everyone blowing who wishes, proclaiming that the great Day of Atonement and the Feast of Tabernacles are now approaching]
Posted by Pam Kohler at 6:30 AM

Email ThisBlogThis!Share to TwitterShare to FacebookShare to Pinterest
Labels: The Lord's Feasts