I guess I could characterize this post as a continuation of Friday's, which was titled It's Not Enough!  Because I think I know the people who tune into read my humble thoughts, I'm pretty sure that there are many of you who are wondering just what it looks like to exhibit the Power of the Kingdom in your lives.  And I feel as though I need to further explain what I mean by my frustration with The Church.  I know that this offends some of my Christian brethren because "The Church" belongs to Jesus, and my statements are often construed as divisive and negative towards what Jesus calls "My Church".  Let me first, dispel those false impressions, and then I will try to be more specific about what I would recommend for living a "Kingdom life".

When I talk about the Church, I am referring to the Body of Christ -- those individuals who have been "called" from their life of sin, and "chosen" to separate themselves from the world and walk in the righteous way of Jesus; who with one purpose, one mind, and one heart follow and do the teachings of Jesus.  Now, for the last several hundred years, that Body has been assembled in congregations who have determined that "it is through the Church that God manifests His highest purposes, and the Church must be the most glorious of all His works". 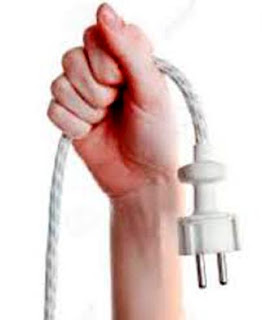 Modern Charismatic and Evangelistic movements point to the so-called fivefold ministry in Ephesians 4 as the primary custodians of today's Church -- the offices of apostles, prophets, evangelists, pastors (or "shepherds") and teachers. It seems to me that their mission is built upon the foundation of the holy Scriptures and upheld by the pillars of the Gospel of Salvation, Grace,  Love, and Glory of the Lord.  They will say that it is their goal to replicate the model that Jesus showed us and to see their congregants reach the neighborhoods and the nations with the Gospel.
That is a noble mission, and nothing wrong with that.  But I don't see the most obvious component of Jesus's model ... the Power of His Father that was exhibited through Him and the works He did.  And if I am going to hold to Jesus's model of the Church, I find no specific instructions from Him to "associate yourselves into particular societies or churches" as one popular Reformation preacher prescribes.  And I do not believe that if, as a Christian, you "are not walking with a local congregation of believers, then you are not walking with God".  I must say that statements like that offend me.
Were the Twelve Apostles part of a local congregation or synagogue?  No, they walked with Jesus.   And what did Jesus do? He manifested the Glory, and Mercy, and Love, and POWER of God, did He not?  He did what He heard the Father tell Him to do, and what He saw the Father doing in Heaven.  So, I think it is safe to surmise that His Gospel message of the Kingdom of Heaven was the Good News of what the Father was doing, and desired to be done by His Son to show the Father's Glory.
When Jesus announced that the "Kingdom of Heaven was at hand", He was saying, I am going to show you what it is like in Heaven by my actions.  Watch what I do by the Power given to me by My Father.  And when you have understood that it is for His Glory, then I will give you the Authority to use that same Power to make the Kingdom of God a reality here on earth.
But do you notice the characteristics that our religious organizations choose to use to magnify The Father?  His Gospel, His Grace, His Love, and His Glory.  Now, I don't want you to misunderstand me -- those aren't wrong!! They are just incomplete!  Religion today teaches us we are to imitate Jesus and the Father by manifesting Their Grace and Their Glory -- and I agree.  But where is the promotion of the Power that Jesus exhibited as a picture of His Father in Heaven? It has been all but eliminated from "The Church".
So, I want to be very clear that when I say I am frustrated by The Church, and that what we, as the Body of Christ, are accomplishing "is not enough", I am talking about the "Powerless Church" who concentrates on the Gospel of Salvation, instead of the Gospel of the Kingdom, which Jesus said was the purpose for which He was sent (Luke 4:43).  And that "Good News" of the Kingdom was to be preached everywhere and revealed in signs and wonders  --- healing the sick, delivering people from the torment of the Enemy, and even raising people from death -- all so there could be no mistaking God's Love, His Grace, and HIS POWER! All that adds up to His Greatness, or His Glory.
So, now to address what that looks like for me and you.  Believe me, I know that all this sounds like it is going to involve us getting uncomfortable with our status quo.  And that's exactly what Jesus demands of us!  Can you imagine how the Apostles felt?  They were taken from their ordinary lives, and found themselves working with strangers (and even people they despised, as in the case of Levi, the tax collector).  They were accustomed to being innocuous members of their synagogues, akin to sitting quietly in a pew in the back row of some church today.  They were used to following the rituals and traditions of that synagogue, and their personal relationship with God [who had chosen them as a people to glorify Him] was more habitual and routine than intimate. 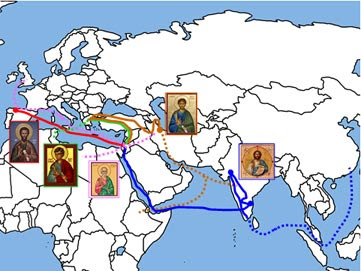 But what did Jesus tell them they would do? "You will receive Power when the Holy Spirit has come upon you, and you will be My witnesses in Jerusalem and in all Judea and Samaria, and to the end of the earth".  They didn't stay in their synagogues and minister within the buildings.  They were sent out into the world to make a difference!  Just look at the places the Apostles went to with the message  that "the Kingdom of God is at hand" ... Spain, Greece, Iran, Ethiopia, India, even Great Britain!  And  we can't even get the message (let alone the works) out of the building to the prostitute on the corner, or the local drug dealer!  Where is the power in that?
But why are so many of our Churches (and us) powerless today?  What are we afraid of?  Perhaps we are frightened of being deceived by charlatans.  But doesn't that express Doubt in the Holy Spirit to counsel us and guide us?  Or does it go deeper than that, and actually show Unbelief in the Power of God to act through us today?  We must have a call to action to touch the individual lives of people in our own cities, neighborhoods, and communities. First and foremost, that requires teaching people what the Kingdom of God means and how Jesus manifested that on earth.  And if we are afraid of poking the devil, then aren't we saying that we believe his power is greater than our God's power to protect us?
If we are going to transform the culture, the culture needs to know what the Kingdom of God looks like.  If we are following Jesus and His commands then it should look like this ... recognizing the needs of both our fellow Believers and the Lost.  It looks like us asking them if they need prayer for issues in their life, and if the answer is healing, then we do as Jesus did and lay hands on them, calling on the Power of the Father in us (which is the Holy Spirit) to heal their affliction. We are to believe that God can use us to see them healed on earth, as it is in Heaven.
If they are being attacked by entities in their sleep, or tormented by voices in their head, then we are to do what Jesus showed the Apostles, and in His Name, bind and cast out those demons.  Anything that we saw Jesus do, we also have the power to do because He sent His power when the Holy Spirit came to reside in us.  And just like the Apostles and the Disciples after them, we are to be His witnesses unto the ends of the earth.
We live in a hurting world, just as it was in the days that Jesus walked this earth. And yes, it's good to hear sermons in our Churches that we are to "live a life of joy in the midst of brokenness" and to "not love the things that God hates", but where is the call to action that should be going along with that message?  How does that transform the lives of people who need to see the works of God manifested by the Body of Christ?
We are called to be Sons and Daughters of the Kingdom.  And Jesus has given us the perfect model to invade the culture with God's Kingdom.  I invite you to read the Four Gospels and take notes of the works that Jesus did, and His instructions to His followers.  Everywhere He went, He taught about what the Kingdom of God was, and then He did the works that would bring this earth into alignment with His Father's Kingdom.
Will we be uncomfortable doing them?  Certainly. But no more than the Twelve were when He commanded them to do the same works.  And will the culture and our religious institutions criticize, censure, and revile us? Again, just like they did when Jesus showed the First Century Believers how to walk with God.  But does Jesus need laborers in the field, and witnesses to spread the Good News?  Every bit as much as He needed it in 30 A.D.  Are you willing to be a member of His True Church; the Son or Daughter of the Kingdom that is willing to leave the life you have known for a road that will be difficult to travel, and without many rewards this side of Heaven? I will grant you that it is a scary proposition, but as a very dear friend of mine said, the only answer we ought to give is, "Yes, Master"!

1 Peter 2:21    "For to this you have been called, because Christ also suffered for you, leaving you an example, so that you might follow in His steps".

Email ThisBlogThis!Share to TwitterShare to FacebookShare to Pinterest
Labels: Deliverance and Healing, The Church