Is Your Faith A Verb Or A Noun?


That's really a very important question if you are going to be effective in God's Kingdom on earth. Is your faith inactive or passive; something you say you "have"?  Or, is your faith a working, functioning part of who you are; something you "do"?
I think first, we must come to an understanding of what "Faith" is, which involves unpacking the definition until we get to the very core or root of its meaning.  So bear with me for a moment, while I open up this gift of Faith from God and see what it's made of.
I'm pretty sure that all Christians can agree that Faith involves trust, belief, and confidence in God [that He exists; is our Creator; is the Provider and Bestower of eternal salvation through Jesus Christ; and that Jesus defeated the power of the devil at the Cross]. And "Belief" and "Faith" are often interchangeable in regard to our opinion of God. So, what does it mean "to believe"? I will submit to you that to believe something, one must be persuaded that it is true.  It is this persuasion of the truth that results in faith -- we believe because we are persuaded that God is real; that He sent His Son to pay the debt we owe; and our reward for being obedient to Christ is our eternal salvation.  But there's more! 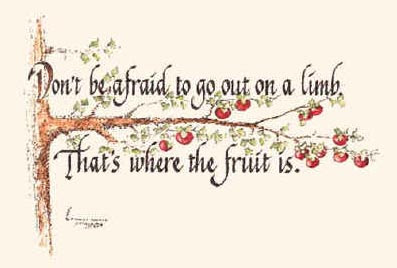 The Bible has a lot to say about Faith... Faith comes from what is heard [what is told], and what is heard comes through the preached word of Christ.  This verse illustrates what I meant by "persuasion that comes from the Truth" (God's Word). The Bible also says Without faith it is impossible to please Him. That implies obedience, doesn't it?  In other words, obedience is produced by our faith, and is an observable act or manner of conduct that is a result of having faith.
Put in very simple terms, Faith is one way for God to recognize us [who belong to Him] apart from those who don't. And how is He able to do that?  By our actions! Yes, He is able to see into our hearts, but when we take action and obey God, it is visible evidence [to others] that we believe Him; that we trust Him.  Even more importantly, if we have true Faith in God, He has promised that we will receive His Holy Spirit (Galatians 3:14). And with the Holy Spirit comes the power of God. And that power is not to sit idle!
Let me present a series of thoughts around which we "ran a rabbit" at our Home Church this past Saturday... Can you agree with me that we receive the full measure of the Holy Spirit at the time that we come to Faith; in other words, that we get the full measure of His power when we believe in Jesus Christ as our Savior? By that, I mean that God doesn't give us just a little bit of Himself to see if we can tolerate the power; or to say, "As your faith grows, I'll deposit more of my Power in you".  No, He gave each of us the identical amount, and we are completely filled with the Holy Spirit. If your faith is growing, you are trusting more to call upon the Power within you.
Now, let's consider how we use that Power; or if I may -- if how we apply it is, in any way, in relation to how much we trust and believe [or exercise our faith] in God.  We know by the examples of Hebrews, Chapter 11, and other stories in the Bible, that there are people who by their faith, do great things for the Kingdom of God... Abel offered a greater sacrifice than Cain; Enoch was taken to Eternity; Noah built an ark; Abraham left his ancestral lands for a land promised to his descendants; Moses answered the call of God to deliver the Israelites out of bondage; the Israelites celebrated the Lord's Feasts; Joshua led the people in bringing down the walls of Jericho; Rahab helped the Israelite spies to escape; Meshach, Shadrach, and Abednego entered a fiery furnace; the Apostles were persecuted and martyred; and the early Christians went to their deaths in the Roman Coliseum.
What do each of these people have in common? They received power from God to work on His behalf!  In the Old Testament examples, it was God taking action to work on behalf of His people by sending His Holy Spirit to accomplish His purpose. Now that we are part of a new covenant with God, He has put His power IN us that we might use it to accomplish His purpose on behalf of the Kingdom Jesus came to establish.  God took back the power that man gave to Satan in the Garden, and Jesus returned it to us through the Holy Spirit, so that by our faith we could keep the devil in defeat.
So let me ask you this ... are you using that power that Jesus deposited in you?  Can you see that the measure by which you use that [full] power might be a measure of your faith?  Do you remember that Jesus said, if you have faith and do not doubt ... you [could] say to this mountain, ‘Be taken up and thrown into the sea,’ [and] it will happen. Do you think you could do that by your own power? Do you believe that the Holy Spirit has enough power to do it? If you believe you have the full measure of the Holy Spirit in you, is it conceivable that you could accomplish this seemingly impossible command? But, if you doubt, then you will fail.
Now consider the Apostles who we know received the full measure of power from Jesus. It was their faith that carried them through their trials and persecution, and through their horrendous deaths.  We must remember that they would not have been able to endure the suffering if not for the power of their faith, which was manifested in the power of the Holy Spirit in them. 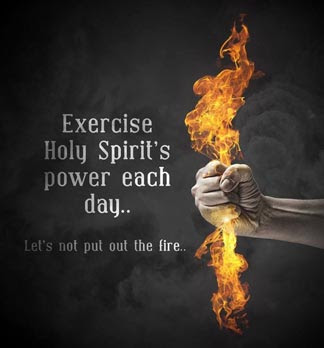 Paul told us this:  My message and my preaching were not with persuasive words of wisdom, but with a demonstration of the Spirit’s power, so that your faith would not rest on men’s wisdom, but on God’s power. It is very clear from this passage that our faith and God's power are connected through the Holy Spirit.  In fact, I would be willing to say that a primary aim of Paul's ministry was to point to Faith in [and by] the Power of God.
So, can you see why it is so important that I keep hammering home the concept of our Power and Authority [given to us by Jesus Christ]?  We have His authority to use the Power of the Holy Spirit [in us] to continue the work He began.  And that can only happen if we have Faith in who He said He was, and who He said we are.  If you are having a difficult time believing this concept, then chances are your Faith is a noun.  You pray to God and wait for Him to do something.  But if your Faith is a verb, then you are likely exerting your Authority to call on the Power of the Holy Spirit to heal people, defeat their demons, and take the message of God's Kingdom [on earth, as it is in Heaven] to disbelievers. You know that God is glorified when you put your faith in action.
But here's what often happens ... People of active (working) Faith scare and offend those who are stationary or ineffective in their Faith. They are threatened by us, because they are suspicious of our claims of Divine Power and Authority; and they are too frightened that the devil might defeat them if they try to use theirs.  If they could just understand that until Jesus returns, we are God's ambassadors; and He has given us the gift of Faith to use His Power to challenge the power of the Enemy!
The last thing I want to leave you with, is this ... I promise you that it is just as Jesus told us: if we have even the faith of a mustard seed, nothing is impossible for us.  Even the smallest amount of faith has the power of the Holy Spirit attached to it.  But you have to do something with it!  You have to use it! A person with little faith has as much of the Holy Spirit as a person who has great faith.  The difference is that the one who displays greater faith has done the works that Jesus did ... anyone who believes in Me will also do the things that I do; and he will do even greater things than these [in extent and outreach].
We believe because we have been persuaded by the Truth of God's Word.  And that believing results in Faith; and with Faith we receive the Holy Spirit and His Power. And with that faith and power we are to demonstrate God's Power.  It's all about action; all about doing something to achieve a goal -- to stand against the wiles of the devil, thereby glorifying our God who gives us eternal life.  Here's the reality -- Faith is the bold, committed act of your will; your determination [and single-mindedness] to act on behalf of God and His Kingdom. Faith requires us to take action. Let your faith be a verb!

Romans 4:20   "But he did not doubt or waver in unbelief concerning the promise of God, but he grew strong and empowered by faith, giving glory to God"
Posted by Pam Kohler at 7:00 AM

Email ThisBlogThis!Share to TwitterShare to FacebookShare to Pinterest
Labels: Faith, Power and Authority