My Passion For The Bible

Want to get an idea of what typically happens when I sit down to write a blog post?  I receive ideas from several sources -- whether it be a podcast, an article I've read, or a discussion with fellow Christians -- but they all drive me to the Bible to see what God has to say on any given subject.  Such was the case, yesterday, when I found myself in a discussion with my husband about the importance of Luke 10:19, and how it pertains to our Kingdom work.

As you can see, if you click on this link, different versions of the Bible give us different text and slightly different interpretations. (NOTE: the use of the word "authority" in the ESV and NASB Bibles when referring to what Jesus has given us to tread on serpents and scorpions, versus the use of the word "power" in the King James Bible). I will be writing on this important verse (and its consequences for us) in an upcoming blog, but for today, I want to share where my study took me. 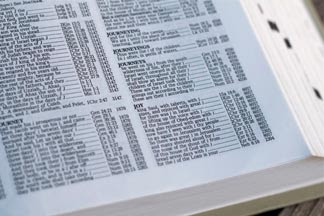 As we look at the modern translations, the last few years have seen the advent of Study Bibles, some better than others.  But here is what I want us all to concentrate on ... As Christians, it is important for us to make wise decisions on which versions of the Bible that we depend upon to receive the best translation of God's Word.  And, yes, our critics will no doubt point to the various translation errors and say that is why we cannot trust the Bible to be the inerrant Word of God.  But the Word of God as revealed to man has remained unchanged from generation to generation, no matter how hard the Enemy has tried to corrupt it.  History shows us that God has always used men who were willing to die to see that His Word stayed true and authentic.  He has preserved His Word as a means to know Him and to worship Him. And just as He inspired the original writers to represent Him accurately, He can inspire us, who are sincerely seeking Him, to receive His true revelation.  No matter what version of the Bible you are reading, I recommend that you compare and contrast versions in your never-ending journey to know the God we serve.  The journey His Word has taken to get to us in the 21st Century is nothing less than miraculous.  It has survived for over 3400 years, and neither man nor devil has been able to destroy it.  May it forever be a lamp to my feet, and a light to my path!

Thank you to Greatsite.com for providing the historical facts of the Bible's timeline.  You can read a more detailed history of the facts I've given you, by clicking this link.

If you are interested to know what versions of the Bible I consult in my personal study, I refer to the King James Bible, the Greek New Testament (by Kenneth Wuest), the Septuagint, the Complete Jewish Bible, the English Standard Version, the Geneva Bible, and the New American Standard Version. I am by no means stating that other versions are in error; these are just the versions that I find most useful for me.

Isaiah 40:8   "The grass withers, the flower fades, but the Word of our God will stand forever."