Do We Even Know What It Means To Be "The Church"?

Yesterday, I expressed my concerns and frustrations regarding the institutionalized "Church", and how my spirit senses that we are stifling the full image of Jesus and His ministry.  That got me to thinking ... What did Jesus expect of the Church?  How did He envision it? And is it what He intended it to be? 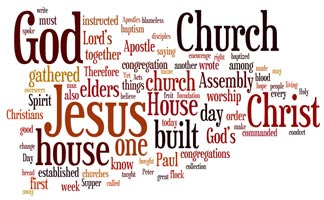 There have been 20 centuries since our Savior walked this earth and the Church came into existence. As we are well into the 21st, I think it's time we take a good hard look at ourselves and determine if we even resemble what He began, and if we are serving His purpose for the Kingdom of God.
First of all, you can scour the internet and find all kinds of commentaries and discussions on what the Church should be, and more often than not, it seems that it is from man's perspective -- it is what we have decided the Church should look like from hundreds of years of internal deliberation and analysis.  But is that what really matters -- what we have determined? Because, I would venture to say that if you asked ten Christians what Jesus intended The Church to be, you would probably get ten different answers, depending on their denomination and generational biases.  If you had to find the common denominator among those varying opinions, you would probably come up with a checklist describing the Church as something close to the following:  1) a community of prayer based on the Word;  2) we are to worship God;  3) we are to make disciples;  4) we are to be in genuine fellowship with one another; encouraging each other in our walk with Christ; and finally, 5) we are to proclaim the Gospel to the rest of the world.
All of those are good descriptions; no one could deny their importance.  But do they represent what Jesus conveyed as His charge to those who would follow Him? Consider this ... Did you know that there are only two instances that Jesus even mentions the word church in the four Gospels?  The first is in Matthew 16:15-19, where it is my opinion that Jesus describes the spiritual aspect of what "Church" means to Him.  In this passage, Jesus acknowledges Peter's confession of faith in Him as the Son of the Living God, and tells Peter that on this rock I will build my church, and the gates of Hades shall not overpower it.  Peter is also told that he will be given the keys to the Kingdom of Heaven, and whatever you bind on earth will be bound in heaven, and whatever you loose on earth will be loosed in heaven.
I would like to encourage you to read my post on this passage, as it will clear up what I think is a mistaken image of establishing an "organized" church model, with Peter as the head.  Here is a quick synopsis of what I think Jesus meant (and I hope you will read the entire post to get the full context):  Where this talk took place, and what Jesus said, would have made Peter and his fellow disciples very uneasy.  They knew they were standing on the ground where the Fallen Angels landed on their descent to earth (in Genesis 6:1-4), and it is ground that the Nephilim had inhabited.  In Jewish theology, the spirits of these dead warrior-kings were demons.  Jews believed that this area, with its connection to Fallen Angels and temples dedicated to Zeus and Baal worship, was the entryway to the underworld -- the gates of Sheol, which simply means “the place of the dead” or “the place of departed souls/spirits.”  (The New Testament Greek equivalent is Hades, or in English, Hell).  In this case, with its history involving Fallen Angels, this was a place of evil departed spirits, or demons.
Therefore, Peter clearly understood what Jesus was saying -- that when He referred to "the rock" on which He would build His Church, He did not mean either Peter or Himself.  Peter and the other Disciples knew Jesus was talking about the very rock on which they were standing -- the foot of Mount Hermon, the demonic headquarters of the Old Testament and the Greek world. So when Jesus declared His plan to start His Church on that very spot -- on the top of the gates of hell -- He is saying that He would crush both Evil and Death, and bury them!  He is saying that He intends for the power of His Church to be like a huge rock that will smash the rocks upon which the gates of hell rested -- and He intends His Church to take the fight to the Enemy! 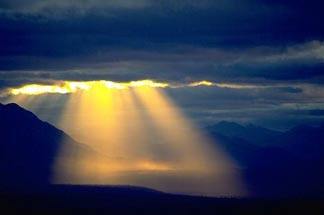 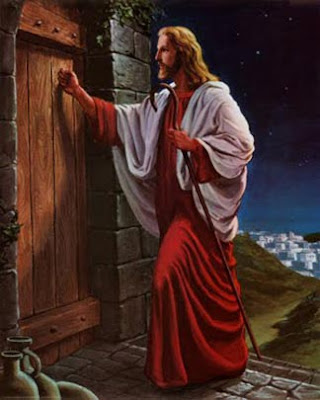 So, do our churches observe ALL THINGS as commanded by Jesus?  If He walked into any church in America today, what would He hear, or what would He find?  Isn't it acceptable to think that whatever Christ taught the original apostles, He would expect to find in His Church?  Would He find a Church that taught the foundational principles of His teachings, or one that extolled their own denominational doctrine?  Would He find your church celebrating the Holy Feast Days as commanded by God, or observing man-made holy days called Christmas and Easter, while rationalizing that they commemorate Him? (And then ask yourself this question:  Do you think Christmas and Easter are celebrated in Heaven -- or Passover, Feast of Tabernacles, etc.? ... On Earth as it is in Heaven, remember?).
Again, if Jesus entered your church, would He find disciples healing the sick (as Peter did) and casting out demons (as the 70 evangelists did)?  Or would He hear condemnation of those acts as heresy?  Would He hear a message from the pulpit saying, "While we are to try to keep the Ten Commandments, it is not necessary [to keep them] to receive eternal life. Jesus did away with those ‘Old Testament Laws’ and nailed them to the Cross".  Do you think He might want to stand up and shout, Remember what I told you in Matthew 19:17: If you would enter life, keep the commandments!
These are just a few of my thoughts about how Jesus would look upon The Church today.  Are we hearing His voice?  And does He know us?  Are we truly following Him in ALL His ways?  Are we producing any fruit?  And if so, is it fruit that He recognizes -- or is it the world that commends us?  My spirit just keeps bombarding me with all these thoughts because I sense that the Harvest is near. And as the Church, it is incumbent upon us that we ask ourselves if we have prepared the soil (the world) to receive the seed (His message of the Kingdom); if we have cultivated that soil (broken up the plans of the Enemy to deceive the world) so that our King might reap the harvest He left us in charge of.
You see, I fear that we have concentrated on watering the plants in our own garden (our church buildings) instead of preparing and cultivating the fields in the outside world.  And while I see fruit being borne within the assembly, the world doesn't seem to get to share in savoring the sweet taste of Jesus. With His return eminent, I suspect that Jesus is looking forward to a Great Harvest.  The Church was to play a part in bringing that about, both in the spiritual and physical realms.  How have we stood the test of time, and how will He judge us?

And He said to them,  "The harvest is plentiful, but the laborers are few. Therefore pray earnestly to the Lord of the harvest to send out laborers into His harvest".

Email ThisBlogThis!Share to TwitterShare to FacebookShare to Pinterest
Labels: Power and Authority, The Bible, The Church