Can We Make The Church Great Again?

I wrote this post on the eve of Election Day, so I do not yet know who was voted in as our next President.  And, to be honest, the point of this post is not to comment on the 45th President and the changes that are about to come upon our country -- whether good or bad -- but to remark on the state of the country due to the absence of influence by the Church.  Let's face it, we are where we are because the Church has abandoned its moral obligation to the Body of Christ, and failed to honor God's will.  The question now becomes, "Can We Make The Church Great Again" and change the course of our history?

As much as I am inclined to treat the internet with disdain and contempt, it does give me the opportunity to read and hear opinions of others that I might otherwise never have the opportunity to experience.  One of my favorite sites to peruse is one called PassTheSalt.com, written by Coach Dave Daubenmire, and from whom I borrowed todays's blog title and subject matter.
In case you are unfamiliar with Coach Dave, he is a veteran 35-year high school football coach, who was spurred to action when attacked and eventually sued by the ACLU in the late 1990’s for mixing prayer with his coaching. After a two year battle for his 1st amendment rights and a determination to not back down, the ACLU relented and offered Coach an out-of-court settlement.
That event led to a decision to leave coaching in favor of encouraging the Body of Christ to enter into the cultural war.  Coach Dave developed PASS THE SALT to bring together the Body of Christ across denominational, racial, and economical lines to demonstrate to America the power of Biblical unity. His vision is to unite, organize, and mobilize the Army of God to be Salt and Light as stated in Matthew 5:12. 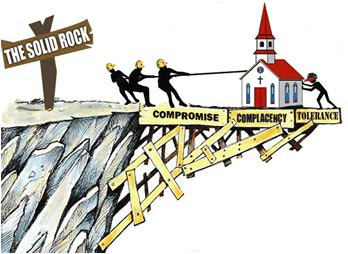 Coach Dave believes strongly in challenging the status quo of the modern Church, and in doing so, taking the fight to the cultural enemy.  He has become a recognizable voice in the media, and is an unashamed, articulate apologist for the Christian worldview.  So, it is with a nod of approval that I share with you some of his latest opinions, along with my own commentary on the subject.
As you can guess by the title, Coach Dave is playing off Donald Trump's campaign slogan, "Make America Great Again".  But as all of us who mourn the state of the modern world, we recognize that not only is America not great anymore, but neither is the Church.  Just as America's influence and power have faded in the wake of "political correctness" and compromise, so has the Church's.  Even in my lifetime, the Church used to be a powerful force in demanding morality among our nation's populace.  But today, the promotion of immoral behavior has become America's greatest export, and the Church is largely silent, and certainly not unified in calling for repentance.
As Coach Dave points out in his blog post, "The greatness of America was that we once taught our children that real liberty was not doing whatever one wanted, but rather choosing to do what was right."  And that idea was supported and taught by the Church, which provided the moral compass of the nation.  Not anymore.  Today, there is no consistent standard of what is right and wrong.  It is all "relative" and according to "what seems right in one's own eyes".
You might recognize that from a Bible verse in Judges, Chapters 17 and 21, and is a result of the sin of Micah in continuing in idol worship.  There were no judges in the land of Israel at that time to point out this sin, or restrain the people from it.  The law of God had been forsaken and replaced with subjectivism (the philosophical theory that there is no truth outside of one's own experience; or the idea that there is no absolute Truth).  This is exactly what we are seeing today in our postmodern, relativist culture.  It is to be expected that the world will act like this, but this attitude has also entered, and almost overwhelmed, Christendom as we know it.  Christianity is being remade in the imaginations of men.  The rules are being set by false teachers, and the Christian masses are quick to follow.
But what does the Bible say?  In Proverbs 14:12, it says,  There is a way which seemeth right unto a man, but the end thereof are the ways of death.  So Americans are clinging to the idea of making America Great Again, in the hopes that we can turn the tide of wickedness, violence, corruptness, degeneracy, and immoral behavior that has come to define our culture and society.  But the truth is that America will not be great again, until the Church, or the Body of Christ, becomes great again and a force of righteousness in our land.
It's really very simple to see ... there is a direct correlation between diminishing God in our land, and our turn towards immorality.  We have removed the Biblical foundations that the Church once embodied, and as a result, our families, our schools, our government, and our faith have suffered.  Coach Dave points out that, according to the latest Pew Research Poll, 71% of Americans identify themselves as Christian…a decline of 8% in the past 7 years.  Let that sink in a minute.  Only 4% of Americans call themselves atheist or agnostic, yet it is this very small minority of Americans who have THEIR religious beliefs represented in the government.  How have Christians permitted the values of the overwhelming majority of society to be banished from public discourse? How has the American Church, which was once the backbone of our great nation, permitted our government to become agnostic in regards to moral behavior? 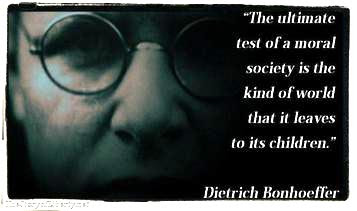 I believe the truth of our "lukewarm" foundation lies in the impressions of Dietrich Bonhoeffer, the Lutheran pastor, who came to America in 1939, hoping to wait out Hitler's oppression in Germany and who hoped to return to rebuild the German Church after the war.  But he was greatly disappointed in the American Church, as these comments display:  I now wonder whether it is true that America is the country without a reformation? There hardly ever seem to be "encounters" [with God] in this great country.  But where there is no encounter, where liberty is the only unifying factor, one naturally knows nothing of the community which is created through encounter ... Lively and original, but too much analysis and too little Gospel ... The separation of church and state does not result in the church continuing to apply itself to its own task; it is no guarantee against secularism.  Nowhere is the church more secularized than where it is separated in principle, as it does here.  This very separation can create an opposition, so that the church engages much more strongly in political and secular things.
Sadly, Bonhoeffer's reflections have come to full-blown fruition these 76 years later.  And as Coach Dave surmises, it doesn't really matter who won the election, The Church should be held accountable for the direction the nation takes going forward.  Will the results look like we got a reprieve from God and a chance to return to a moral nation, or will the anti-Christian tactics of those who continue in power come to bare on anyone who dares to proclaim the Supremacy of God?
I couldn't agree more with Coach Dave, who finished his blog post with the following statements:  "As goes the Church, so goes the nation. It is time for true believers in Jesus to call out the charlatans in the pulpits masquerading as pastors and demand a return to Biblical values as the foundation of this nation. We must actively oppose the self-centered Gospel currently belching out of the mouths of the hirelings who are peddling snake-oil Christianity in order to advance their own kingdoms".
Pretty tough assertion, but nonetheless called for and necessary.  Can we, as a nation, be redeemed and forgiven by our God?  Absolutely!  The Bible gives us a picture of just that in the history of the Judean King, Manasseh, one of the most wicked kings that the divided nation of Israel had seen.  As frightening as it sounds, Manasseh's punishment by God was exactly what he and the nation needed:  "Therefore the LORD brought upon them the captains of the army of the king of Assyria, who took Manasseh with hooks, bound him with bronze fetters, and carried him off to Babylon. Now when he was in affliction, he implored the LORD his God, and humbled himself greatly before the God of his fathers, and prayed to Him; and He received his entreaty, heard his supplication, and brought him back to Jerusalem into his kingdom. Then Manasseh knew that the LORD was God". (2 Chronicles 33:11-13).
Will that be the history of our nation?  Let us pray that it won't be necessary that we be defeated and taken into captivity.  Let us pray that we, and our next leader, have the heartfelt desire to humble ourselves and pray, asking for forgiveness.  But most of all, it is my prayer that God's Church will repent and ask for forgiveness; and that we, the people, will unite in obedience to our God and return to His righteous ways.  That is where our hope and our strength and our liberty truly lie.

Ezekiel 18:30-31    This is the declaration of the Lord God. “Repent and turn from all your transgressions, so they will not be a stumbling block that causes your punishment.  Throw off all the transgressions you have committed, and get yourselves a new heart and a new spirit"...
Posted by Pam Kohler at 7:00 AM

Email ThisBlogThis!Share to TwitterShare to FacebookShare to Pinterest
Labels: Morality, Our Culture., The Church