An Open Letter To God: Give Us Your Anointed As Our Leader

I am writing this blog post 24 hours prior to Election Day, 2016.  At this point, I have no idea who will win the election to become the next President of the United States.  Frankly, as I consider my choices, I am not encouraged by either candidate, and like millions of Americans, I am suffering from "Election overload and fatigue".
I recognize that this nation is in dire need of a leader who is righteous and God-fearing, and who is willing to seek Your [The Almighty's] will.  But neither candidate seems to fit that bill.  So, is all lost for our country?  Can You still work with whomever is elected, regardless of their relationship with You?  And if so, to what effect will we be subjected ... Your Judgment or Your Restoration?
Sadly, I am afraid we only have to look at world and Biblical history to know the answers.  At this point, I am considering two world rulers that You have used to execute Your will:  The Babylonian King Nebuchadnezzar; and Cyrus the Great, King of Persia.  First, I see Nebuchadezzar, the Babylonian conquerer best known for taking Daniel into captivity, and for his prophetic dreams that foretell the history of the world's empires and the eventual End Times scenario.  His reign is notorious for the capture and exile of the Jewish people in Babylon.  But my careful discernment of this history denotes that Nebuchadnezzar is, wittingly or unwittingly, the “servant” You used to discipline the disobedient Judah. 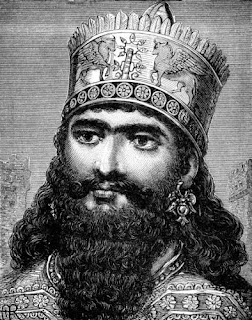 There is no mistaking Your intention.  Jeremiah 27:6 plainly says, Now I have given all these lands into the hand of Nebuchadnezzar king of Babylon, My servant and instrument ... God, it is so clear to me that You used Nebuchadnezzar as Your instrument of Justice against a rebellious and disobedient land of Judah. And here are the questions I am asking myself ... In recognition of our own rebellious nature, what would keep You from using the next President as Your instrument of judgment against our nation?  Does the next President need to have a relationship with You to fulfill Your will?  Was Nebuchadnezzar actually aware that he was Your servant when he was devastating Judah?  As I do my research, historical records do not seem to indicate that he intended his campaign against Judah as an act of obedience to You, The Most High God.
I am also aware that ancient cylinders have been discovered with the following inscription on them:  "I, Nebuchadnezzar, king of Babylon, the loyal shepherd, the one permanently selected by Marduk, the exalted ruler, the one loved by Nabû, the wise expert who is attentive to the ways of the gods, the tireless governor, the caretaker of Esagil and Ezida, the foremost heir of Nabopolassar, king of Babylon, I, when Marduk, my great lord, duly created me to take care of him, Nabû, the administrator of the totality of heaven and the netherworld, put in my hands the just scepter."  As a serious student of the Bible, I know that Marduk is another name for Nimrod, one of the foremost idolators and rebels against You.  Nebuchadnezzar clearly did not worship YHWH, my God.  Yet You used him to apply Judgment against Your rebellious and disobedient people.  Shouldn't we be keeping that in mind during these final hours of our election process?
Also, when I consider King Cyrus, a pagan ruler who established the Persian Empire through a series of bloody battles and conquests, as well as ruthless politics, I realize that You actually call Cyrus, "My anointed".  And Father, I know that the 21st Century Church has gotten their theology all mixed up when it comes to that word.  I know that the Hebrew word for "anointed" is mashiah, which has come down to us as "messiah" and translated as christos in Greek.  And because we now use this term exclusively for Jesus Christ, the Messiah, it is difficult for the Church to discern that this term could be applied, by You, to a pagan ruler.
But I have learned that this term -- "anointed" or "messiah" -- was used by Old Testament writers to refer to kings, priests, and high priests; actually in its most basic interpretation, it means any person that You authorize and set apart for Your service.  And history and the Bible plainly tell us that You certainly used Cyrus to perform Your will.  In Isaiah 44, You specifically say,  To Cyrus, My Anointed, whose right hand I have held ... I have raised him up in righteousness, and I will direct all his ways; He shall build My city and let My exiles go free... 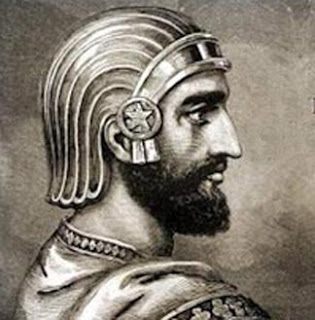 So history shows us that You did, indeed, raise King Cyrus to deliver Your people from their captivity in Babylon [under the rule of King Nebuchadnezzar] and returned them to their land.  Careful study shows me that for the real Christ to be born in Bethlehem as the Biblical prophecy states, Jews had to be living in Judea.  And I know that it was You, who also inspired Cyrus to institute his conciliatory policy toward foreign religions so that a Temple could be built to which Your Son could come. And among other points, Jerusalem had to be rebuilt so Jesus could die outside the city for our sins.
So, God, You clearly had a plan to inspire Cyrus to restore Your nation of Judah and Your Temple.  Yet, Cyrus did not know you as YHWH, either.  Scripture tells us in Isaiah 45 that You say, [I will work through you, Cyrus,] that you may know that I, the LORD, who call you by your name, am the God of Israel. For Jacob My servant's sake, and Israel My elect, I have even called you by your name; I have named you, though you have not known Me.  But it is amazing to me, Father, that that doesn't keep You from using Cyrus, or making Yourself known to him.  In fact, Cyrus says, 'The LORD [meaning Yahweh], the God of heaven, has given me all the kingdoms of the earth, and he has charged me to build him a house at Jerusalem, which is in Judah. Whoever is among you of all his people, may the LORD [Yahweh] his God be with him. Let him go up.'" (2 Chr 36:23).
But I can't forget that the famous Cyrus Cylinder, discovered in 1879, reveals that like Nebuchadnezzar, the pagan god Marduk was given credit for the reign of Cyrus.  Indeed, history shows that Cyrus restored the various idol temples in his empire.  So, he was clearly a pagan ruler.
So, God, where does that leave us with this election of 2016?  Can a ruler of a nation who clearly does not know You as Lord, in a real and personal way, still be used by You to accomplish Your purposes?  You've certainly shown us in Your Word that this is a possibility.  Because, Father, I'm not seeing any real fruit from either candidate that tells me they know Your Son as their Savior.  And Father, I have a very real fear that even if one of them has been anointed by You to lead our nation, that they will follow the path of Cyrus -- after fulfilling the mission You assigned to him, he fell victim to a lust for power and glory, and met his death far from home, trying to conquer the nomads of the steppes.  I am well aware that we cannot put our faith or trust in princes [or princesses] of this world.
In the end, Father, I see the two possibilities with which we are presented:  Your Word has shown me two pagan kings; one raised up to bring judgment and the other raised up to bring restoration.  Which one will we get for this season of our history?  I am left praying for the real Messiah, Jesus of Nazareth, who will return to conquer, to punish, to restore and to reconcile all nations to Himself.  All thoughts of the judgment of a tyrant like Nebuchadnezzar, or the intercession of a beneficent king like Cyrus of Persia, will pale beside the glories of the wonderful Kingdom of God.
So, should you decide to delay the arrival of the True Messiah, it is my prayer that whomever will be declared the new Leader of our nation tomorrow will be like those rulers of old, and will recognize that they hold that office at the behest of You, and their power lies in Your hand.  I hope they realize that it is You who will be directing their ways.  Above all else, it is my earnest prayer that it is for Your purpose of restoration and not judgment.  Have mercy on us, Father!

1 Peter 2:13-14     "Be subject for the Lord’s sake to every human institution, whether it be to the emperor as supreme, or to governors as sent by Him to punish those who do evil and to praise those who do good."