Valley of Decision: Don't Let The Father Of Lies Steal or Destroy Our Nation

How sad, that on this Veteran's Day, we are seeing such acrimony and malice being exhibited post-election.  It is estimated that over 1.1 million Americans have died in service to this country since its inception.  I hate to think that the memory of that monumental sacrifice is diminished in the wake of unrealized election results.  I can recognize that one-half of the nation is disappointed at the outcome, but I truly am grieved at the excessive and unreasonable responses -- everything from abusive language and insults, to the calls for violence, destruction, and revolution.  And believe me, if the election had turned out the other way, I would feel the same if I saw such rancor and resentment.
For those of us who have prayed for peace, reconciliation, and a return to moral absolutes and true liberty, I think we are a little aghast at the venom and poison being spewed.  But what else should we expect?  If President-Elect Trump is to be a genuine instrument of God, then isn't it likely that the Enemy is putting his own game plan into motion?  And let's be honest, we know that Romans 13 tells us that all those in authority have been granted their position by the permission and sanction of God.  Whether Donald Trump holds office as an indicator of God's Judgment or Restoration remains to be seen.  We can be hopeful -- and should be -- at this point, but there are lots of decisions to be made in the coming days that will set our nation on its future course. 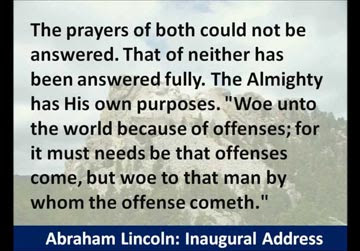 I can't help but compare this tenuous time to what it must have been like when Abraham Lincoln took office and the nation, like now, was so divided in its political character and complexion.  President-Elect Lincoln took a cautious approach in the days leading up to his inauguration, being careful to offer an olive branch to his former opponents, while making it clear that he would take a firm stance on preserving the nation.  And, just as now, he found it necessary to remind the citizens of America that we share a common heritage.
In the closing remarks of his Inaugural Address, President Lincoln said, “In your hand, my fellow countrymen, and not in mine, is the momentous issue of civil war. The government will not assail you. You can have no conflict without being yourselves the aggressors. You have no oath in Heaven to destroy the government, while I shall have the most solemn one to preserve, protect, and defend it… We are not enemies, but friends. We must not be enemies. Though passion may have strained, it must not break our bonds of affection. The mystic chords of memory, stretching from every battlefield and patriot grave, to every living heart and hearthstone, all over this broad land, will yet swell the chorus of the Union, when again touched, as surely they will be, by the better angels of our nature.”
How appropriate for each of us ... to decide if we are willing to let our differences tear us apart; or if we can find a way to come together for the common good.  How we make that very important decision will have tremendous consequences for this nation.  Because it is clear to me that we have allowed ourselves to be indoctrinated and lied to, while we remanded our civic duties to a federal government who only looked out for themselves.
I happen to believe that God established this nation.  The Bible tells us, "From one man He made all the nations, that they should inhabit the whole earth; and He marked out their appointed times in history and the boundaries of their lands" (Acts 17:26).  We were appointed to this nation at this time, and there is a purpose for both our lives and our country.   As a Believer, I happen to think our purpose is to glorify God.  Unfortunately, too many have listened to the Father of Lies and their purpose in life has become to exalt, elevate, and enhance themselves.  They listened to the Devil whisper lies of entitlement and privilege, so that they have forgotten that it is God "who gives to all [people] life and breath and all things".  Instead, they now believe that it is the Federal Government who provides all things, and they bow down at the altar of the man (or woman) who promises the most.
I would caution all who are reading this blog today to be careful about falling into this trap.  Whether you are cheering at the prospect of a President Trump, or are devastated over "what might have been" with a President Clinton, we must not put our hope and trust in a clay vessel.  Yes, we must reside as citizens of the United States until we are called to our heavenly home, and it is reasonable to want a prosperous and free life.  But our first responsibility, as Christians, is to be a part of establishing the Kingdom of God on earth.  And there is no place for hatred or division or exploitation or alienation in that Holy government.
REMEMBER:  the Devil comes to steal, kill, and destroy.  Don't let him steal the brotherhood you share with your fellow man.  Don't let him kill the Spirit of love, joy, peace, patience, kindness, goodness, and faithfulness that resides in your heart.  And don't let him destroy your testimony of the Word!  As President Lincoln solemnly swore, We must not be enemies!  Let's recognize our true Enemy and do not allow him to devour us!
We have been down that road before in this nation, and it has caused a grievous and grave wound upon our land.  So, please pray for our nation and our leaders; it is time for us to come together and heal.  The next two months until Inauguration Day will be a time of momentous decisions.  Let us remain steadfast in our purpose of reconciliation and resolution, and not make the same mistakes the nation made prior to Lincoln's Presidency .... Six weeks later, the Confederates fired on Fort Sumter in Charleston, South Carolina, and the Civil War began.  May God have mercy on our nation!

And thank you to all the Veterans who have done their part to preserve this great nation... I am especially proud of my father, my uncle, my cousin, and my nephew.  I am grateful each of you answered the call!

Acts 17:30    "Therefore God overlooked and disregarded the former ages of ignorance; but now He commands all people everywhere to repent [that is, to change their old way of thinking, to regret their past sins, and to seek God’s purpose for their lives]..."
Posted by Pam Kohler at 7:00 AM