The Primacy and Sufficiency of The Word of God

As I scan the abundant number of "Christian" websites, I am actually overwhelmed with the divergent headlines.  They all proclaim to represent The Faith, but so many seem in contrast to each other that I wonder what they base their foundational beliefs upon and who or what is their principal source.  Shouldn't it be the Word of God?
Just a cursory glance at the website, Pulpit and Pen, reveals an abundance of theological movements and positions, and I almost feel like I am looking at a smorgasbord of "Christian-like" promotions.  I will admit that I am largely unfamiliar with all these people and their doctrinal reputations, but it is obvious that controversy swirls around them all.  There is so much condemnation against each other that it is confusing, and honestly, quite sad.
Here is just a small sampling of headlines:  Bethel Church: Pimping Heresy; iDisciple ... Your Daily Connection with God or Heretics?; Joyce Meyer Undead, David Barton Buys a Ph.D., and Conan O'Brien is Ordained; If You Hate Hillsong, You Hate God; Carl Lentz to Oprah Winfrey:  You Don't Have To Be A Christian To Have A Relationship With God; and my personal favorite, Kenneth Copeland:  If You Don't Vote For Trump, You're Going To Be Held Accountable to God for Murder. 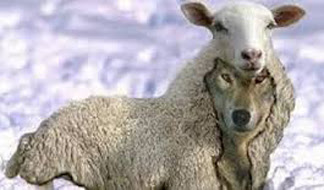 I'm sure each of these people believe they are spreading the Gospel of Jesus, according to their own understanding.  But look at the fruit of those "understandings" ... Can anyone explain to me the Biblical principals behind movements like the New Apostolic Reformation (NAR), Montanism, Revival Us 2016, Evangelicals For Life, Postmillennial Reconstructionism, the new Feminist Theology, New Calvinsim, and countless others?  Also, so many people considered "Leaders" in the modern Christian circles are at each other's throats. Beth Moore is accused of being a False Teacher; John Piper is being questioned about his support for Rick Warren and Mark Driscoll; the Christian Post is accused of promoting filth and world entertainment; and Kirk Cameron is purported to be pushing a false gospel of American Patriotism.
Maybe it's no different than those first years after the Ascension of our Lord; maybe nothing has changed since the Gnostics rivaled the early Church, or Simon the Sorcerer promoted himself and his philosophical theology as truth.  There has certainly been a parade of "theologians" down through the centuries who have proffered their version of the Gospel Message.
And maybe I'm just less educated in Biblical studies, and am unfamiliar with higher levels of theological thought, but I am not interested in all these ideologies, new schools of thought, or radical tenets that seem in conflict with what I read in the Bible.  In fact, I would say that I subscribe to the same belief as the 19th-Century pastor, Charles Spurgeon: "If you wish to know God, you must know His Word. If you wish to perceive His power, you must see how He works by His Word. If you wish to know His purpose before it comes to pass, you can only discover it by His Word."
That's why I find it highly disconcerting to find so many Christians living their faith according to the tenets of The Purpose Driven Life by Rick Warren; or starting each day out by reading the daily devotional in Jesus Calling.  (You can read about my concerns on this controversial, but popular, little book here).  What has happened to the Authority and Sufficiency of the Word of God?  Why is it not enough for us, and why is it not the first and primary source that we go to in order to discern God's will?

I think what saddens me the most is that I fear many Christians are unable to defend the Word of God against distorted and false teachings... because they do not open their Bibles and actually read the Word of God!  Just look how easy it has been for the new breed of theologians to gather their followings from among the Body of Christ.  One need only look at the profitable businesses that surround many of these movements and individuals.  Why are so many Christians willing to endorse men, women, and groups whose teachings do not align with Scripture?  Have we forgotten what it means to be a good Berean; to diligently search the Scripture to see if what they are saying is God's Truth?  Or are we captivated by a gospel that makes us feel good and is centered on what we want out of this life?
The bottom line is this:  We either believe that the Bible is the complete Word of God as He intended us to know it, or we think there is more that He wants to say to us through people and movements.  I, for one, know that there is so much He wants to reveal to me; so much that I do not understand.  But I believe it can all be found within the pages of His Holy Book.  By concentrating on what He has to say, and searching for the meaning of His Word through the men He trusted to reveal it, I have received more knowledge of Him than from any human.
There is so much to learn about YHWH through my personal study of His Word; why would I depend on mere men to give me their interpretations?  For example, I could spend the rest of my life studying the meanings of names and places in the Bible, because they mean something to God and they spoke to the Hebrews and Greeks of the day.  That holiest of Books was not written to us, but it has great meaning for us when we come to understand what God was saying to His Chosen People.  The Bible alone, reveals the true nature of God.  That is why He inspired men to write it, and His Word declares that "It is written" in order to affirm that it is the only pure Word of God.  So, here is what I have determined for myself .... What is at stake in these times of opposing theology and controversial movements is nothing less than God's incorruptible Truth.  And for me, the Holy Bible is my primary and authoritative source.  It is sufficient for me and my spirit.

Psalm 119:160     "The entirety of Your word is truth [the full meaning of all Your precepts], And every one of Your righteous ordinances endures forever."

Email ThisBlogThis!Share to TwitterShare to FacebookShare to Pinterest
Labels: False Doctrine, The Bible