The Election of Our Lifetime

I got a phone call from my brother yesterday, proudly proclaiming that he had voted early.  Like many of you, he rightly understands that this Presidential election could very well determine the future of our nation as we know it.  If you are not a Christian, then you probably look upon this election as a decision between a life-long politician and an anti-Washington Establishment candidate.
If you are a Christian, then issues like Supreme Court Justices, who will decide the law of the land in regards to abortion, same-sex marriage, and religious and civil rights, are important to you.  Sadly, if we are looking for a true Christian candidate, then we're out of luck.  But, as I've seen written on several different websites, "we are not voting for a pastor but for a politician". 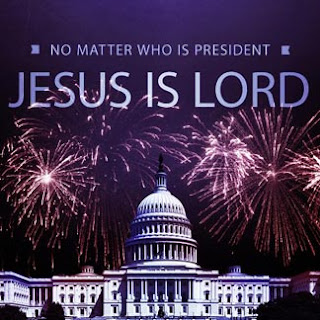 And let's not lose sight that we live in a fallen world.  Being Conservative or Liberal does not equal being a Christian.  That's where a candidate's character and integrity come into play.  I think it is pretty safe to say that, the way the world is headed, the next President is going to have a tremendous amount of adversity to deal with.  Which one do you think will stand up to the pressure, and consider what is best for the people, rather than their political future?  I know that is nearly impossible to imagine, given the history of politicians in our lifetime, but I truly believe we are on the precipice of world-changing events that will effect the entire globe... so who do you trust to measure up to that mental, physical, and emotional stress (or at least, which one do you mistrust the least?)
Here's my true assessment of the Christian voter's dilemma ... It has become clearer and clearer to me that we have abdicated our role as citizens of the Kingdom of God in favor of seeing ourselves as citizens of the United States of America.  Because we have not understood or performed our role as citizens of God's Kingdom, and helped to institute a structured, organized government with the very authority of God behind it, we are suffering the consequences of surrendering our identity.
Stop and consider this ... To Jesus and His disciples, the term Kingdom of God meant a government that would be established on earth. They anticipated that its arrival would amount to nothing less than a sweeping, overwhelming change in the world order.  Read that highlighted part of the last sentence again.  Have we, the Body of Christ, done that in this country?  No!  Instead, we are seeing more violence, lawlessness, and discord than ever.
And I firmly believe that we could be facing the advent of one of the most repressive systems in the history of our nation.  So what do we do if God allows that to take place?  What is our role after November 8th, no matter who wins?  It's clear that we have failed in the last several decades to influence the culture or the government.  We have not conducted ourselves as representatives of the Kingdom of God on earth.  Instead we have compromised and made concessions in the hope that we could maintain our status within our own closed faction of society.  But we see where that got us.
Those who we failed to influence are now not satisfied with our status quo.  And we've forgotten Who we represent on this planet, and sought those politicians we hoped would represent us.  We've lost sight of the fact that America is just our temporary home, and we were to help establish Our Father's Kingdom ... on earth as it is in Heaven.
Is it too late to reclaim our ambassadorship and citizenship?  Never!  This age in which we live is awash in hostilities, injustice, and fear.  But we serve a King who is the answer to all that!  We can show our fellow citizens that there is a counter-culture that offers hope!  The solution to our nation's problems does not lie in another bill before the Legislature, or a Supreme Court decision, or even who is the 45th President of the United States.  The answer lies in fulfilling our roles as citizens of a very real Kingdom of God on earth.
If we accept that challenge, we must decide which of the two candidates is most likely to serve our purpose.  To not vote is your choice, as well.  This is the fine line that the Christian must walk; we have dual citizenship, both as citizens of America and the Kingdom.  For myself, I will exercise my right to vote for the leader of my nation; with an eye on which one will allow me to influence my fellow Americans by helping to establish a government with, not only the Authority of God behind it, but with that sweeping, overwhelming change that has been anticipated since our King walked this earth.  It may not come in my lifetime, but I am ready to assume my proper identity and walk out my citizenship in His Kingdom.  May the nation get in step with my Lord.

Ephesians 2:19    "So then you are no longer strangers and aliens [outsiders without rights of citizenship], but you are fellow citizens with the saints (God’s people), and are [members] of God’s household..."

Email ThisBlogThis!Share to TwitterShare to FacebookShare to Pinterest
Labels: Elections, The Kingdom of God