You Can Never Hear It Enough: We Are Called to Freedom 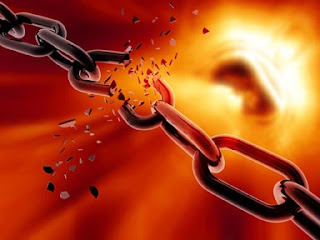 Once again, someone who has been freed from their spiritual bondage has asked if they could share their testimony.  I will never turn down an opportunity for anyone to hear of the Power and Authority of Jesus over the darkness of slavery to our Adversary.  There is hope in this testament of personal struggle, and affirmation that you can be delivered from the deception, schemes, lies, and outright attacks designed to rob you of who you were made to be.  People who have experienced the freedom that Jesus offers can say it better than I ever can.  So, read these wise and authentic words and let your spirit respond to them.  It is for this kind of freedom, that Jesus came to die for us.

I know that this may have been hard for some of you to read... it is raw, sometimes brutal, and very emotional.  But it is not uncommon.  It makes me sad that so many Christians are suffering pain and spiritual wounds because they have not been taught that satan can use not only your sins, but the sins of others that have been committed against you, to keep you in spiritual bondage.  Could Jesus intervene and stop the abuse?  Absolutely!  But one of God's sovereign characteristics is that He does not interfere with the free will of those He has created -- even if it means we might be damaged in the process.  To do otherwise, would not glorify Him when we allow Him to show us that He was present during our pain.  And in the process, He helps us to forgive those who have sinned against us, just as we want to be forgiven our own sins.  And we come out the other side of Deliverance a changed person; a transformed person; a free person.  Praise God for His Sovereignty and His Abounding Love!