Burning Man 2016: Can A Christian Find God At A Pagan Celebration?

Once again, the images coming out of the festival called Burning Man remind me of a New Age Woodstock; or as one attendee described it, "It's kind of like the Star Wars bar scene in a Mad Max movie". It is variably called, "a counter-culture phenomenon"; "the largest pagan celebration in the world"; and "an experience of spiritual connection".  But connection to what, or whom?
Larry Harvey, the founder of the Burning Man Festival on the Summer Solstice in 1986 says, "I've never believed in a Supreme Being, but I do believe that Being is Supreme.  That's a subtle distinction; but a spiritual notion".  Really?!?!  Harvey, in case you haven't guessed, is a self-professed atheist, and his statement has about as much substance as "the nothingness" in which he believes.
But an interesting fact about Burning Man appears to be that more and more Christians are attending, and I was curious to see how the event was represented, both from a cultural perspective and a spiritual viewpoint.  This year's theme was Da Vinci's Workshop, and the symbol of this year's festival was DaVinci's Vitruvian Man.
The Burning Man website described the 2016 festival as "inspired by the Italian Renaissance, when an historic convergence of inspired artistry, technical innovation and enlightened patronage launched Europe out of medievalism and into modernity. Our story will focus on ... humanist ideals, a rediscovery of science, and funding from a newly moneyed class of entrepreneurs [which will fund] a revolutionary cultural movement that [will] redefine Western civilization. Five centuries later, we will attempt to recreate this potent social alchemy by combining Burning Man art, maker culture and creative philanthropy to make Black Rock City the epicenter of a new renaissance."  I think I can sum up that high-sounding characterization in a few words ... Man as Creator; creating a bridge between science and spirituality.
DaVinci himself called his symbol "The Magical Proportions of Man", and explained it like this:  "The outstretched arms and legs of a man form a square and a circle: the square symbolizes the solid physical world and the circle the spiritual and eternal. Man bridges the gap between these two worlds."   So ... I wanted to know how it was possible to seek true spirituality while attending a festival that is described as "notoriously hedonistic. There are naked people, and a lot of sex, drugs, alcohol, and all-night raves. But for many, Burning Man is also a spiritual pursuit." 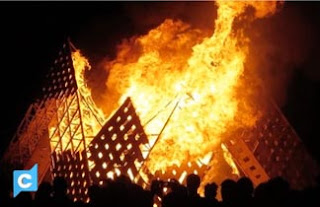 I read over a half-dozen accounts (and watched a documented film version) of people claiming to be Christian, who have attended the Festival over the last few years, and I guess I wasn't surprised to find a wide difference of opinion.   Here is what George Otis Jr., president of The Sentinel Group (a Christian research agency), wrote of his experience in the year 2000:  "On Saturday night, the hell-themed [festival] reached its crescendo in the form of a drama....These people were literally celebrating the fact that one day they would enter hell. To simulate their journey, the camp’s center stage was transformed into the "Vestibule of Hell." The guest of honor was none other than "Papa Satan."....As the lecherous Papa Satan bowed in mock chains before a placard reading "Believe on the Lord Jesus Christ and thou shalt be saved," a group called "Idiot Flesh," [supposedly Christians] dressed as hooded executioners, began to play a discordant dirge accompanied by flashing strobes. When the crowd started its torchlight procession toward the Gates of Hell and an eerie, sculpted castle called The City of Dis, I sensed an unmistakable chill in the air. Our march had been joined by unseen, malevolent guests....nudist and a moving sea of devil banners [also] moved around us....At the tri-tower City of Dis, our descent into the Inferno reached a demonic sanctuary....While massive loudspeakers pumped out a hellish bass tone accompanied by tormented screams....people dressed as demonic insects celebrated by copulating with other captured souls. It was a scene that looked as if it had been plucked from a horrific nightmare. Mesmerized by the evocative music, the performers began to chant, "Devil’s delight, fire tonight!" Wood piles inside the towers of Dis were ignited, causing orange flames to belch forth from the eyes and mouths of demonic gargoyles built onto the turrets. As the heat became more intense, the entourage danced around the towers. Satan had defeated the church."
Then in 2015, the website Christianity Today, featured an article written by Dr. Rick Richardson, an Anglican priest, and Associate Professor of Evangelicalism at Wheaton College, a Christian Liberal Arts college.  Dr. Richardson attended the festival at the invitation of his son, who did not connect with the organized church.  At first he saw the gathering as one big party, which he concedes it was, but soon found himself praying for a young woman whom he sensed had a broken heart.  I will let him finish telling you about his encounter:  "I prayed for the presence and power of God to heal her heart and fill her and use her in the lives of others. At the end of the prayer time, she wept and expressed that she had come 1000 miles to hear that word from God. I told her about Jesus’ love for her and she responded over the next several days, becoming open to Jesus for the first time in her life."
Dr. Richardson continued, "Here is one thing I have already discovered. Many of the people driving the rise of these new spiritualities that mix Buddhist, Hindu, Native American, and New Age ideas, come from the church. That’s right. They are the formerly churched. And they are not hostile to their background. Not at all. It just never captured them ... but [they] are still hungry for spiritual connection and meaning. Nature abhors a vacuum, and these new spiritualities are filling the spiritual vacuum left by unsatisfactory church connections."
But what spirits are they connecting to?  Just because you're having a spiritual encounter, you can't assume it is with YHWH! Or maybe that doesn't really matter to the attendees!
Then there was an interview on the documentary video I watched with a woman pastor in a tent called "The Freedom Lounge".  The film admitted that this was the "charismatic" flavor of the presence of the Church at Burning Man.  She said, "We invite [the people] to have an encounter with the One who made them.  When they meet the Holy Spirit, which we call the Spirit of Truth, they are rocked!  Personally, I am a follower of Jesus, and that's where my power comes from.  But I am seeing that there is a lot of anger here about the structure we put around the Church.  When we show them they can have a personal encounter, and feel the presence of that Love, and get filled up with it, then they have a spiritual connection that is very real".
Okay, so that leaves me with a couple of questions ... Is the move from pure self-indulgence in 2000, towards spirituality in the last couple of years, centered in ecumenicalism?  In reality, isn't humanism what's really being worshipped?
In my research, I had no problem finding quotes from attendees who expressed that they listened for the voice of "the Spirit", and had a spiritual encounter.  Remember the Anglican priest from Wheaton College, the Christian college?  He also said that many of the values of Burning Man are "worthy of Scripture, including radical inclusion (what Christians call grace!), community effort, civic responsibility, and leaving no trace on the environment. Burners also practice a culture of gifting (everyone brings a gift to the community, reminiscent of the Body of Christ) ....  If we can learn from spiritually diverse Burners why they have embraced new and alternative spiritualities, and if we can learn from Christian groups who are reaching them, maybe we could see a new Jesus movement in this decade, not unlike what happened in the 60s". 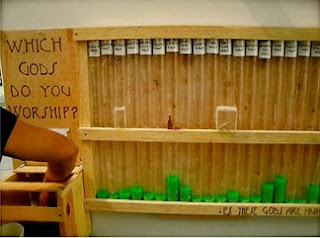 But the question, for me, becomes who is influencing whom?  Because there is no room for compromise when it comes to the One True God.  So, is this just another attempt by "the Church" to appear accommodating to alternative spiritual paths?  And then there are the stories and images of attendees seeking portals; worshipping idols and false gods; making sacrifices to honor the earth ... all things that God detests.  Yes, we are to engage with the world by taking the message of Christ to them.  But I think we flirt with danger when our priority changes from speaking God's unyielding Truths to trying to understand and appeal to alternative spiritualities.
Unfortunately, this approach is very appealing to our youth, the unchurched, and those recently disillusioned with religion.  But here's what it looks like to me:  Combining mysticism, rationalism, and humanism with an alternative form of Christianity in order to create a new definition of "church", "faith", or "spirituality" still looks like paganism to me.  And, in the end, I just have to ask, Does this please The Most High God?

Ezekiel 20:7    Then said I unto them, Cast away every man the abominations of his eyes, and defile not yourselves with the idols of Egypt: I am the LORD your God.
Posted by Pam Kohler at 7:00 AM