The World's Seduction to Evil and Wicked Disception; What Is Our Responsibility? 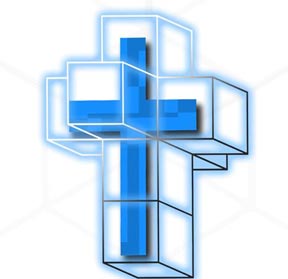 One of my favorite authors, who also happens to be a Christian minister and host of his own weekly podcast, Daniel Duval, has written a fascinating book titled Higher Dimensions: Parallel Dimensions & The Spirit Realm.  In the book, he considers all the ramifications of the different dimensions in which God exists and how He interacts with us.  And in case you're wondering where that concept exists in the Bible, we see it portrayed in the creation of the earth and the heavens.  You have the physical planet and the three dimensions of heaven (the firmament or sky that surrounds the earth; the 2nd heaven, commonly known as the spiritual realm; and the 3rd heaven, where the throne room of God exists).
Scripture also references the breadth, length, height, and depth of God's love (Ephesians 3:18), which are all different dimensions of the manifestation of God.  And that's just naming a few of the dimensions; there are higher ones that we have never known existed!  But I want to move beyond this academic understanding of the physical properties of these named dimensions, and show you how it is a very real and relevant concern for us in these Last Days.
In 2 Thessalonians, Chapter Two, the Apostle Paul gives a very sobering forecast.  He warns of a day when a Man of Lawlessness will be revealed; and he calls him the son of destruction [the Antichrist, the one destined to be destroyed].  The coming of this Lawless One will be "attended by great power and with all sorts of [pretended] miracles and signs and delusive marvels -- [all of them] lying wonders."  And, sadly, too many of the human race will be seduced by these wicked deceptions because they refuse to welcome and love God's Truth and be saved.
We are all familiar with this Scripture and this warning.  But have you ever wondered exactly what that will look like?  Is there anything in the Bible that we can compare it to?  If so, will it look the same today?  First, let's consider what Scripture says about this time when the Man of Lawlessness is in power.  It seems to correspond to the terror that will reign on the earth when the Sixth Seal in the Book of Revelation is broken. (The other Seals are as follows:  First Seal (the conqueror); Second Seal (war); Third Seal (famine); Fourth Seal (death); and Fifth Seal (martyrs).
Furthermore, when the Sixth Seal is broken, "the stars of the sky" will fall to the earth.  As discussed in my previous post, "stars" mean angelic beings in the Bible.  I don't know about you, but my spirit is discerning that the Lawless One and his cohorts are preparing to make their presence known.  First of all, we need to understand that the only thing holding them back now is the hand of the Restrainer.  There has been much discussion down through the centuries regarding the identity of who this mysterious restrainer is, and I will pursue this particular line of reasoning on Sunday's post.
But for now, if you will allow me, we will move forward towards the specific point I want to make in this post.  Let's assume that the translation in the Greek New Testament is correct, and 2 Thessalonians 2:7 reads like this:  For the mystery of the aforementioned lawlessness is now operating.  Only He [the Holy Spirit] who is holding [the lawlessness] down, [will do so] until He goes out from the midst [of humanity].  So when the Holy Spirit is removed from humanity, it sounds as if we can expect many stars, or fallen angel entities to come back to earth.  I say, "come back to earth", because they've been here before.  We've seen their appearance before in Genesis 6:1-4, when fallen angels came to earth to mate with human women in an effort to pollute the genetic pool so that the only perfect human being in the history of the world, Jesus of Nazareth, could be born.  This is the very first mention of genetic engineering for evil purposes, and it is in the Bible! 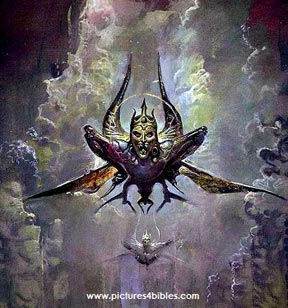 The offspring of this unholy mating were evil hybrids known as the Nephilim.  But Genesis 6 is not the only place we find references to such profane hybrids.  They appear in the first book of the Bible, and again in the last book.  In Revelation, Chapter 9, it is very clear (especially in the Amplified version), that an angelic being falls from heaven and opens the bottomless pit to let out a horde of locusts.  These locusts are very distinctly described as hybrids ... with shapes like horses, faces like men, hair like women, teeth like lions, with wings, and with stingers like scorpions.  The entire description of these creatures is anatomical; they are part horse, part human, part lion, and part scorpion.
And just like in Genesis, when these evil hybrid creatures die, their spirits are then enslaved to do the work of satan and further his agenda.  But here's what we need to understand, and the real issue I want to present ... although the particular hybrids of Genesis and Revelation were created for those specific times, satan's agenda for them has never been limited to just those two times in the history of mankind.  Hybrids clearly existed in the Old Testament, and as Dan Duval suggests, "With thousands of years to refine their technologies, what do you think satan and his minions are up to today"?
He contends that they are tinkering with all kinds of possibilities in order to create their own army in advance of what comes out of the pit in Revelation 9.  Furthermore, he thinks that much of the work being done towards that end is happening in those other dimensions I referenced earlier; in the "heavenly places".  After all, hybrids will be released from the pit, which is another dimension, right?  And here's something we need to realize and understand:  humans are actually obliging these hybrids and contributing to their creation. Don't believe me?  Read this article, which reveals that 150 human-animal hybrid embryos were grown in laboratories in the United Kingdom.
Also, I am becoming more and more skeptical of genome projects, and genetic engineering for "the cause of medicine and mankind".  And it becoming clearer that all these "possibilities" are going to be our concern as God's people on earth.  I'm afraid we are going to be confronted by all kinds of evil that we've imagined only happens in the movies and in science fiction.  And it is our duty as Christians to continue to advance the victory of Christ and the Kingdom of God in spite of all this evil.
I know that's a scary prospect.  But I want to give you a word of encouragement.  The only reason any of this should scare you, is if your view of God is too small.  Read that statement again ... if you're still scared, then it's time to change your perspective and your view of God.  You need to know how powerful He really is, and that He has a plan to conquer this evil.  And here's the really cool part ... He has chosen us -- you and me -- to be a part of His army to defeat His enemies!
And with this word of encouragement, I have a sobering warning.  Even if you don't think you're up to the task, it doesn't matter.  I truly believe in the deepest part of my soul and spirit, that you're not going to have a choice.  So it's time to embrace your true identity -- that you are in Christ, and He in you. We know that our God is sovereign; He is all-powerful and all-knowing; He is present everywhere.  And you know what?  That is His Divine nature, and 2 Peter 1:4 tells us we are partakers [share in; have the qualities and attributes] of that Divine nature.
That means that I want to leave you with this final thought ... this scary and wicked agenda of our Enemy is going to be our problem, whether we like it or not.  And it is our solemn responsibility to not only defend God's Kingdom, but to advance it, by partnering with Him.  It is time to grasp that reality and become who we were made to be.  We are co-heirs with Christ; given His power and authority by our Father; with the expectation that we are to join the fight!  Yes, He is capable of handling it all by Himself, but for some reason, He delights in working with us.  And that part about being a co-heir, or joint heir, with Christ ... it means that we can expect to suffer as He did, but we will also share in His glory, as well as His inheritance.  The world may be seduced by empty promises and wicked deceptions, but, as for me, I pray that I will fulfill my responsibilities as a loyal child of God.

Daniel 11:32    "He shall seduce with flattery those who violate the covenant, but the people who know their God shall stand firm and take action."