The Never-Changing Game Plan of Satan

I love studying history.  I am fascinated how we have arrived at this point in time; and that includes us, as Americans and citizens of the world, as well as us, as followers of Jesus Christ.  What are the means that contributed to our success, and what have been the forces that have opposed us?  Has anything changed in the last two thousand years, and do the actions against the Church differ than those against the world?  In other words, does the Enemy have two different plans of attack to accomplish his goal of supremacy of this planet and its inhabitants?  These are the kinds of questions that swirl around in my head.
And while preparing for our home church's continuing study on the Book of Acts, an answer began to form in the back of my mind ... see what you think.  By the time we get to the eighth chapter in this important epistle from the pen of Luke, we're starting to get a picture of the schemes of the devil, and the counter moves from our God -- just a little more of that cosmic chess match I've referenced before.
At the birth of the Church, we see the religious and civil opposition of the Sanhedrin against those of "The Way".  The Jewish Counsel didn't approve of the focus on Jesus and his teachings, and at the same time, they were concerned that His followers were going to upset the nice little relationship they had with the ruling Roman government.  "Compromise" was the motto of the day.  Don't upset the status quo, and for heaven's sake, don't try to make this Jesus the only way to eternal life.
Is it any different today?  And does it matter whether you are in the Church or out of it?  Certainly, the Church began to suffer religious persecution in the First Century, and the True Church today is being harassed if they hold to true Biblical principles -- even by others who claim they represent God's real purpose for establishing the Church.
The civil opposition against faith is apparent -- prayer is no longer allowed in schools; it is coming under fire at your local city council meeting; and the world doesn't want to hear that Jesus is the only way.  "Compromise" is not only the slogan among some elements of the Body of Christ, but among our civil and political institutions, too.  The 501(c)3 has become an idol with which the federal government tempts the Church to become part of the Beast System.
But just as the Holy Spirit inspired the small group of Apostles and new disciples of Christ to stand for His Truth, there is a remnant today who are standing steadfast, and refusing to weaken or accept anything less than what He commanded.  Compromise with unrighteous religious leaders or a corrupt and wicked civil government will not deter the mission and purpose of our calling.
Back to that First Century Church ... Satan then introduced the sin of Pride into the Church by sowing thoughts of good standing and reputation in the hearts of Ananias and his wife, Sapphira.  In an effort to corrupt the motivations of Believers through self-promotion and aggrandizement, satan sought to diminish the true goal of the Body of Christ: to spread the good news of salvation and eternal life through faith in Jesus Christ.  He is certainly working that same game plan, as evidenced by all the mega-churches and the increase in power, status, and wealth among some of the Church's leaders.The Gospel Message has become lost in the gospels of prosperity, inclusion, and universalism.
But the sin of Pride is not the exclusive property of the Church.  Our Enemy uses it in the secular world, too.  Pride corrupts even the best intentions of worldly men.  Just look at our political scene, and the world of business, and the entertainment industry.  Pride is a favorite tool of the devil to draw the world away from their Savior.  But we know how God feels about Pride, don't we?  And, in case you're unsure, just look how quickly He countered satan's move to instill it in the hearts of Ananias and Sapphira... they were dead in seconds!  So, whether one is part of the Body of Christ, or the world, Pride as a motivator for your own reward is a sure-fire sign that the devil is working on you.
Next, satan tried to use disputes and conflicts among different groups to disrupt God's plan for reconciliation with mankind.  There arose a quarrel and controversy between the Greek-speaking Jews and the native Hebrew Jews, as to the social justice issue of taking care of the widows among the new and growing Church.  If the devil could cause strife between different groups of people, then the message of Grace, Love, and Mercy could not flow from the Church.  God solved that evil plan by inspiring the appointment of a group, headed by the disciple Stephen, to share the administration of the duties in order to serve the interests of all.  The first deacons of the Church were ordained, and the Church survived. 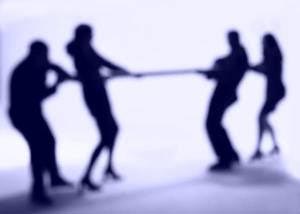 But we still see similar disagreements and quarrels among the different denominations within today's Church; and between the traditionalists and the New Agers; and how many church splits has the Body of Christ endured in the last century alone?  But we also see our Enemy using this same ploy outside the Church, don't we?  The racial tension between the black community and the white community is a result of satan's influence, pitting one group against another.  Foreign refugees and native inhabitants of countries are victims of the devil's subversion.  Muslim versus Christian; Gay versus Straight; Republican versus Democrat... it's all the same game plan ... divide and conquer; I guess the devil believes that to the victor belongs the spoils.
Finally, when all else failed in those first important years of the establishment of the Church, satan employed jealousy, rivalry, false accusations and distortion of the message to try to defeat God's plan.  He might have thought he had won that chess match when he whispered to corruptible men to spread lies about Stephen, who was becoming a bold and effective disciple, willing to stand against the Establishment (which was the Sanhedrin). Satan's move resulted in the stoning death of Stephen, but the Enemy was not the victor.  Stephen became the first martyr of the infant Church, and his blood was the impetus for the Gospel Message to begin spreading across the land.
All we have to do today is look no further than the next 60-second political ad to see the same jealousy, rivalry, false accusations and distortion of a message.  Then there are the recent terror attacks, where the lies and distortions are so apparent as to be laughable... only it is the devil who is laughing.  Although this form of corruption centers around secular and earthly affairs, it results in the same confusion and chaos that it does in the Church.  Satan is able to distract us from our real purpose and path, and keep us fighting amongst ourselves.  And rather than going to battle with the Lord against the Enemy, all this controversy keeps us in the devil's tangled web of deceit.
My intention for pointing out the similarities of satan's game plan is to help us see that he tries to influence all aspects of our lives.  He is not only working in the world, as the prince of this world, but he has never stopped working in the Church.  From the beginning, we have seen him bring strife, conflict, pride, lies, jealousy, and even the power of the Church, itself, to bear against God's creation. Now. it is more apparent than ever that we must be aware, and watch for his schemes and plots to undermine humanity and wreak devastation and destruction.  I truly feel he is putting his final battle plan into motion, and bringing his devastation to fruition.
At the point I am in the Book of Acts, the Bible says that the Church began to be "ravaged by persecution".  That is such an ominous word and one that I am afraid will soon apply to us.  But it is not only the followers of Christ who will be shattered, but the very foundations of civilization.  Thank God, that the Righteousness and Judgment of our Lord will prevail and the game plan of our Adversary will be destroyed.  The victory has already been won, and the spoils are our inheritance in heaven.  Come, Lord, Jesus, Come!

Job 1:7     The Lord said to Satan, “From where have you come?” Satan answered the Lord and said, “From going to and fro on the earth, and from walking up and down on it.”