The Person of Jesus Over Doctrine

For the last few days I have been concentrating on studying and doing research for the Book of Acts study I am leading with our Home Church group.  I can honestly say that my time spent in this pursuit is the best part of my whole day... if I could only spend all day, every day gleaning all the extra information that is available from Scripture, ancient writings, and commentaries, I would be content and blessed beyond measure.

But there is a concept that pricked my spirit during this preparation time and I want to share it with you.  I had finished my notes on Acts, Chapters 6 and 7, which includes the supernaturally-powered speech that Stephen brings before the Sanhedrin, which directly leads to his martyr's death.  It is a magnificent picture of the Holy Spirit, who filled Stephen [and led him] in presenting approximately 2034 years of history – from the call of Abraham to the Crucifixion -- and to represent a case for God’s deliverance of Israel and the glorification of Jesus ... all in less than 5 minutes!
But because the religious leaders of the Jews were so steeped in their structure of institutional religion and its customs, they were blinded to the supernatural power that was affecting Stephen.  Add to that, the fact that they had made an idol out of the Temple, which they accused him of blaspheming against.  Do you see anything here that resembles the state of our modern Church?
During my research, I came across a quote from the acclaimed preacher, Charles Spurgeon.  He wrote, "Beloved friends, I delight to preach to you all the doctrines which I find in God's Word; but I desire ALWAYS to preach the person of Christ above the doctrine; the doctrine is but the chair in which Christ sits as a Prophet to instruct us."  Well, my dear friends, that struck me like lightning! I'm afraid that, like the Sanhedrin, the modern Church has developed its own institutional religion that elevates its doctrine and tenets above the sharing of the Person of Christ.
We have so many customs, and rules, and rituals, that the message of WHO Christ is, and THE MIRACLES He did, and THE WORDS He spoke from His Father have become lost amidst a convoluted set of beliefs that keep us ineffective, focused inward, and without authority in this sinful world.  Instead of proclaiming the POWER and AUTHORITY of Jesus, the Person, we have made powerless idols out of Him and the Church Building and our denominational laws and traditions. 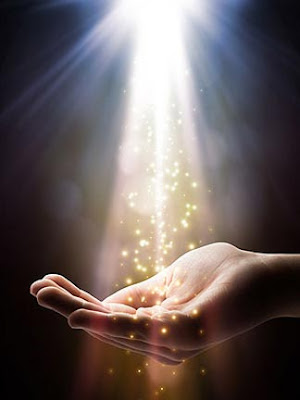 There are times I want to scream the accusation Stephen shouted to his religious leaders:  You are always actively resisting the Holy Spirit!  When we deny or ignore the Power that was exhibited in the man, Jesus, and His Authority that came directly from God, then we are limiting the Kingdom work that can be done by the Church.  By teaching that the Holy Spirit comes to live in us at our conversion, and that's it --- nothing about evidence of the Holy Spirit in our lives to do the things Jesus did [heal the sick, cast out demons, defeat the schemes of the devil]  -- how do we ever expect to distinguish ourselves from the outside, unsaved world???
We have lost the wonder that the Samaritans must have felt when the Evangelist, Philip, came to share the news of who this man Jesus was.  Remember, the Samaritans were the descendants of pagans who had intermarried with the lowest classes of Jews after the Assyrians had conquered the northern kingdom of Israel and carried off the wealthy and middle-class citizens.  They were considered half-breeds and there was a deep-seated prejudice between them and those Jews who considered themselves religious.  They would not have particularly been interested to hear what this man from Jerusalem, who worshipped in the Temple, had to say.  And today, there is nothing that the Church has to offer that the secular unbeliever wants to hear.
Yet Philip's message not only conveyed the modern Church's representation of Jesus as the Son of God, but this evangelist was led by the Holy Spirit to do miracles; Philip showed them the Power of the Holy Spirit and his authority to act on behalf of Jesus to heal the paralyzed and the lame; and as the Bible says, "unclean spirits (demons), shouting loudly, were coming out of many who were possessed".  I have no doubt that the people of Samaria received the wonder of the Person of Christ without being burdened by all the external doctrine of the established religion.  In fact, Scripture says these acts of power and authority by Philip validated his message.  The Holy Spirit, acting through Philip, had confirmed and authenticated the message of salvation.   Is it any wonder that the unsaved world -- in this age of technological marvels and spectacles -- finds no validity in the repetitive message of "Jesus loves you"?
And that is what I strongly feel is missing in the Church today.  God and His Holy Spirit cannot be limited to residing in houses made by human hands.  We do not need to be making idols of structures built by men, or relying on creeds and traditions to portray our image of Christ.  The Bible says that those who heard Philip share his testimony of the Person of Christ were constantly amazed.  Do we Christians, housed in our buildings dedicated to God, project amazement to those outside the Body of Christ?  Do we create in them a yearning to be like Christ?  Do they see any evidence of His Power and Authority in our lives?  Do we carry that message to far-off places, like Philip, or challenge the status quo, like Stephen?
Besides the fact that God-fearing people are leaving the Church building in search of the Person and the Power of Christ, I am concerned that the Body of Christ is sorely unprepared for the encroaching Evil that IS evident in the world.  THAT power is making itself known and felt and experienced.  If we, as believers and followers of Jesus, don't begin to exercise the greater power of the Holy Spirit, as did Stephen and Philip [who were men like us], then we can expect to be overcome.  If we only have the Apostles Creed and the Communion Service to take into battle against the Enemy, we can expect to be defeated.  And, my friends, Jesus didn't go to the Cross so that we would be left defenseless.  The early Christians knew that, and they called upon the Power He had clearly assigned to them, and they used their Authority as His witnesses, to declare the message of salvation and eternal life to all those who would follow this Person, called Jesus.  Yes, the message was important, but the evidence of Power and Authority sealed the deal.
Today, there are segments of the Body of Christ who are becoming disillusioned with the tired old rhetoric.  They don't want the building anymore ... they want more of who Jesus was and what He promised; they want evidence of the work and power of the Holy Spirit!  How I wish that everyone could have the faith of my friend, Steve, who when diagnosed with Stage 4 lung cancer, called my husband and me and asked for prayer.  Of course, we prayed with and for him, but because he lived in the city where our Deliverance Ministry mentor lived, we also suggested that he visit with her and let the power of Jesus and the Holy Spirit heal his afflictions and cleanse him of his sins.  Now, several months later, after surgery and what the doctors thought would be a life-long regimen of chemo, his cat scan shows that there is no trace of cancer in his body.  When his physician told him, "I just can't explain it," Steve replied, " I can! It is the Power of the Almighty Living God; the Great I AM!"  Hallelujah, and I thank you, Jesus, for that powerful testimony!  I also pray that many more will come to experience this amazing power in their lives... and live [spend one's life] to tell about it!!!

Email ThisBlogThis!Share to TwitterShare to FacebookShare to Pinterest
Labels: Deliverance and Healing, Power and Authority