A Matter Of Rebellion...

Yesterday, I was standing in line at a checkout counter, and didn't notice the people behind me,  But my husband did.  In fact, he has garnered a reputation for noticing anyone with interesting tattoos, and asking them what their ink means and why they picked that particular symbol to put on their body.  It has actually become a joke between me and my nephew, who has tattoos himself (depicting Bible verses and various associations to his faith; and one for his mom, of course!) -- whenever we are all together and run into a waitress or waiter, or someone out in public, we look at each other, waiting expectantly for that question ... "So, what does your tattoo mean"?
But my husband didn't need to ask the couple behind me in the checkout line.  The man had a huge encircled pentagram on his bicep, among other occultic symbols, and the woman had creepy bats flying up the length of her arm.  We didn't need to wonder what kind of statement they were trying to make; it was obvious. 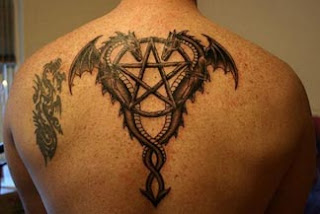 Now, I know that tattoos are the rage today among anyone below the age of 35, and you may think they are just a fad, or this generation's nod to distinguishing themselves from their parents -- kind of like long hair, miniskirts, tie-dye T-shirts, and love beads were to my generation.  But I think it goes beyond that... for the most part, tattoos are permanent statements that people are willing to make for the rest of their lives.  And I would venture that most of them are designed as a method of rebelling against authority and control in their lives; or at least of going against conventional society.  (The problem is, so many are doing it today, that in an effort to distinguish themselves from others, they are beginning to all look alike).
But, perhaps at the heart of this trend, it's a way of saying, "I don't feel like I can control a lot in my life at the moment, but I can control how I feel; and express who or what I am willing to give authority to by the indelible design I put on my body.  It's a way I can make a statement of who I am and how I want the world to see me".
I am not making a statement that all tattoos are done out of a sense of insubordination, disobedience, or defiance.  In fact, we have heard heartwarming stories, such as when a waitress shared the reason behind a small tattoo on her wrist -- it was a personal reminder of her grandmother who had taught her about Jesus.  Or the young man who had the date of his twin brother's death in a car crash tattooed on his forearm. We often hear stories that honor our humanity and the love that can exist between people.
I found it quite interesting when I ran across the Top Ten reasons people get tattooed in Inked Magazine:  In memory of someone; some really love the pain; it's addictive; to express creativity; to feel whole; to overcome or represent obstacles they've faced in their lives; they simply love the art; to spread a specific message; it's trendy; to be spontaneous.  Some of these reasons seem innocuous; others are a little more disturbing.
But sadly, there are an abundance of kids who carry permanent symbols of pagan gods, anti-christ icons, and undisguised associations with the devil.  The man with the huge pentagram knew exactly what he was doing when he had that mark put on his body.  In fact, some of the kids my husband has approached with his innocent question have boldly told him, "It means I am a satanist".  The pride with which that statement was made both saddened and alarmed us.
So, as with anything, when pride and rebellion are combined, we see the influence of the original Rebellious One, himself ... Lucifer.  And, in case you haven't noticed, the symbol of the encircled pentagram is becoming a popular emblem; appearing in movies, TV, tattoos, jewelry, music videos,  horror films, thrillers, and crime dramas ... all reinforcing the symbol’s association with neo-paganism, black magic, and occultism. 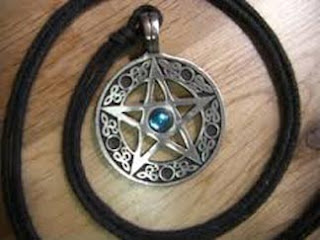 John 8:44   "You are of your father the devil, and it is your will to practice the desires [which are characteristic] of your father. He was a murderer from the beginning, and does not stand in the truth because there is no truth in him. When he lies, he speaks what is natural to him, for he is a liar and the father of lies and half-truths."