Are We Ripe For An End Times Revival?

This past weekend our nation celebrated 240 years of existence.  Depending on who you asked, we celebrated Liberty, Freedom, and a nation founded on Christian principles, OR ... we are entering a new era where America's past is disparaged and our nation's true heritage is one based on genocide, imperialism, slavery, inequality and oppression.
To be honest with you, I'm beginning to think that our true nature lies somewhere in the middle ... we must take off the rose-colored glasses and see our founding in its true light of conflicting philosophies of government and religion, as well as acknowledging that we are not the total monsters of greed, military power, and self-serving authoritarian rule that anti-Americans would paint us.  We have done a lot of good in the world! 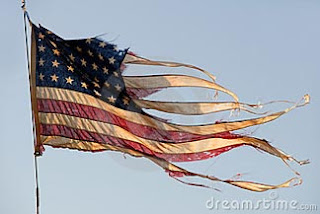 But 240 years is a relatively small period of time in the history of the world, and all those opinions are primarily from a secular viewpoint.  But if we were to take a good hard look in the mirror, and give ourselves an honest appraisal -- as of today, this very minute -- well, it's looking kind of bleak.  The rule of law seems to be whatever the powers-that-be say it is; violence and depravity seem to reign supreme in the top news stories; our society wants tolerance for all kinds of unnatural behavior and opinions, yet any display of Christian values is degraded and ridiculed.  Without a doubt, we fit the description of the End Times in 2 Timothy, Chapter 4:  we don't want to have anything to do with sound teaching or accurate instruction; we will only tolerate those who will teach us what feeds our own passions; and we will turn completely away from listening to the Truth so we can chase after myths and lies that feed our fleshly appetites.
So, how do you think we shape up spiritually after these 240 years, and where do we stand today when compared to nations throughout history?  How do we think God will deal with us?  Obviously, I am speaking to Christians; unbelievers could care less about what my LORD has to say about us.  In fact, a recent commenter on this blog wrote to inform me that, "[the Bible is] something that was made up to keep control of the ppl threw the church and scare ppl into submission saying that if u do anything wrong u are going to hell and only select ppl will go to the pearly gates and walk beside god in which I beleave that is bull shit there is no heaven nor hell when u die u become part of the universe not is some enchanted kingdom that all u religous fanatics beleave what it seems like to me is that u are in a fairy tell world I beleave in god but not how u ppl be leave".  I sincerely apologize for subjecting you to this highly ungrammatical run-on sentence from a delusional non-believer, but I just want you to get an idea of just how far off the track some of our fellow citizens have fallen.
But, are we really that different from the ancient nations of the Bible who lost their way?  Like them we have compromised our values, followed after false gods, established idols for profane worship, and became remiss and negligent in overcoming the temptations and whispers of the Enemy.  The Bible is full of passages that relate God's justifiable discipline and chastisement for abandoning His covenant.  Both the nations of Israel and Judah experienced the firm hand of God, as did specific cities (Sodom and Gomorrah) and individual people (Saul, Moses, David, and Solomon, to just name a few).  However, we must remember that the purpose of chastising is not to destroy, but to lead to repentance, and to restore God’s blessing.
We have seen this purpose in the Old Testament in the life of Jacob, a deceiver and liar; in the life of the Old Testament giant of prayer, Samuel, who interceded for the nation of Israel during their time of idolatrous worship; and in the life experiences of Elijah as he battles Baal worship and persecution by King Ahab and his wicked queen, Jezebel.  The Bible records several instances of restoration, renewal, and revival during the reigns of King Jehoshaphat, Hezekiah, and Josiah -- times when the public worship of YHWH was recognized and re-established.  And of course, the greatest revival of worship of God was the birth of the Church in the New Testament.  As the late Evangelist David Wilkerson describes this time period: "There were signs, wonders, and miracles. The dead were raised.  Fearless evangelists went everywhere preaching the Word.  Jails could not hold them.  Storms could not drown them. When their possessions were seized, they continued to rejoice. When they were stoned, hanged, burned or crucified, they went out singing and praising God.  It was a triumphant church, unafraid of Satan, irreverent toward idols, unmoved by plagues or persecution.  It was a blood-washed church, living and dying in victory."

That was then.  Where are we now?  Can we hope to ever achieve that same status again, especially in America?  I don't know about you, but I feel that the clock is nearing that midnight hour, and I'm wondering if the Body of Christ will make a last-minute turn back towards true worship of our God -- or when the clock strikes midnight and the trumpet is sounded, will the Church be the fat, happy, prosperous, compromising, all-inclusive, self-serving, inward-looking, unfruitful monstrosity it is beginning to resemble?
Or can the prayers of the faithful remnant, the True Body of Christ, move our LORD to intercede on our behalf, restoring and reviving us to meet the coming persecution with power, mighty prayer, and praise?  Can our unclean hands and impure hearts be cleansed in His blood so that the fire of the Holy Spirit will sweep across this land and burn away the dross (the garbage and junk) from our souls, leading this nation to a revival of righteousness?  Does God have it in His Character and Nature to allow one more great Revival before He gives Jesus the green light to exact Judgment upon the world?
Let's just say I believe in those same miracles that occurred at the birth of the New Testament Church. I know that God desires that all men be saved, and I know that His remnant on the earth, at this very moment, are powerful prayer warriors who are deluging Heaven with prayers of repentance and petitions for Grace and Mercy upon the faithful.  I believe that God is going to cleanse, heal, and embrace His Bride, and give the Church true leaders, children after His own heart.  I believe that what God spoke to the House of Israel, through the prophet Ezekiel, can be said to us today:  "And I will sanctify My great name, which was profaned among the heathen, which you have profaned in the midst of them; and the heathen shall know that I am the Lord, says the Lord God. When I shall be sanctified in you before their eyes."
So I believe that God can institute another great revival within His Church and within America; that the remnant who comprise the true Body of Christ will be sanctified in the Lord before the eyes of the wicked heathen ... and they will know that He is the Lord God.  In our 240 years of existence this nation has experienced revivals that have transformed us mightily.  May we all partner with Jesus for the next one.  It will be the key to whether we survive history.

Email ThisBlogThis!Share to TwitterShare to FacebookShare to Pinterest
Labels: History, Liberty and Freedom