The Power of God: A Personal Testimony

This post represents the reflections of a very good friend of mine, who just recently returned from a mission trip to Europe and the refugee camps.  She is a young Millennial and has such a heart for Jesus, vowing to go wherever He sends her in order to share Him with the world.  She began her journey in Brussels, went on to Moscow, and as God would have it, received an opportunity, at the last minute, to alter her itinerary before heading back home to the U.S.  It was here, the last five days that she spent in the refugee camps in northern Greece, that she says changed her life.  Considering my post from yesterday ... if you want to know how we Christians can be the salt of the earth, just read what she has to say:

While standing barefoot on the gravel in between tents in a refugee camp in northern Greece, two little girls, Afghani sisters, walked up to me, gave me hugs, and eventually I had to say goodbye to them. Thinking about that moment [now], I am in tears because it is so hard to leave a place where so many people are living in devastation and so little is being done to help them.
After spending six weeks overseas, five of those days in Greece, my perspective on life has shifted. Millions of people just like you and me are having to flee their homes (which likely have been leveled). These people are engineers, business men, and students who may never finish school; hardworking people who used to live normal lives, and now live in tents, lucky to have a bed. 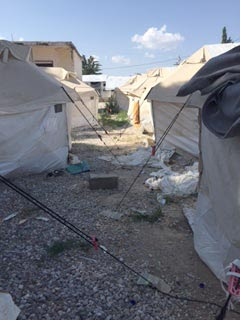 It's almost 100 degrees there, no air conditioning in the camps, the toilets and showers are filthy (for many the conditions are worse in the camps than they were in their home countries), they have limited clothes, and most are in the middle of Ramadan, fasting all day.  The borders are closed now, so these people are beginning to have to accept that they may never leave Greece. The thought of landing back in the States while these people are stuck in a situation that is not only uncomfortable, but deadly for many, is heartbreaking.
I wish the world could understand that there are many people suffering on earth right now while the rest of us go on with normal everyday life without even a thought of those people. The refugee crisis is being called the biggest humanitarian crisis since World War II, but somehow it still surprises people when I tell them why I was in Europe. It's my prayer that our eyes be opened and see people the way Jesus sees people.
(One major takeaway from my time in Greece is that God is moving in the refugee camps. This shouldn't be a surprise since God shows us over and over again in the Bible that He is present and near to comfort those who mourn, and provide for those in need.)
I had the privilege of being invited into the tent of a sweet Syrian family on my first day in the camps. The cultures that the refugees come from are some of the most hospitable I've ever seen. This family offered us coffee, water, tea, and fruit, when really they were the ones who needed it! One of the daughters, Zeinah, interpreted for us so we got to ask them questions about their lives, pray healing over her because she was sick, and then share with them a little bit about Jesus as we know Him.
Near [the time] when we had to leave, with their blessing, we prayed for them all to encounter God (their hands in an open position to receive).  It was so cool that they let us do that because they knew we were Christians! As we were leaving, I asked Zeinah if she could ask the family if any of them had had a dream of a man in white before.  One of the other daughters, Rima, who is 22 years old responded that she had. She described the man as dressed in a white robe to his feet, standing on green grass, and handing her water. She could not see his face because it was too bright.
I opened my Bible to Revelation, Chapter 1, and read to Zeinah the description of Jesus there ("like a son of man", dressed in a robe reaching down to his feet and with a golden sash around his chest. His head and hair were white like wool, as white as snow, and his eyes were like blazing fire. His feet were like bronze glowing in a furnace, and his voice was like the sound of rushing waters. In his right hand he held seven stars, and out of his mouth came a sharp double-edged sword. His face was like the sun shining in all its brilliance.)  Zeinah translated it for Rima, and then looked at me with a smile and said, yes, that is who was in her dream! I excitedly told her that the man in her dream was Jesus, and that she must tell Rima that in the Bible Jesus calls himself the Living Water ...  and just how we need water to live, we need Jesus all the more. I had to leave then, but Zeinah assured me that she would tell Rima that her dream was about Jesus. My prayer is that Rima and her family would continue to have dreams of Jesus and come to know the Man who is pursuing them in their dreams. 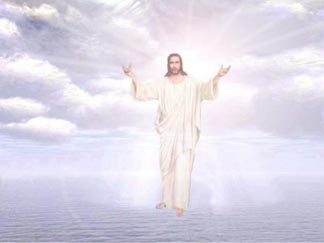 This is not only happening to this family, but Muslims everywhere are reporting having dreams of this "man in white".  Jesus is pursuing the Muslim people in their sleep, and entire families are getting saved across Europe because of it. The power of God is the only way that someone will have [such] an encounter with God, but He is using His people to convey the message of the Gospel ... the Good News of Jesus.
I also got the chance to sit in a tent with seven Muslim-background men, six of which were Afghani, and one was a Syrian Kurdish man. One of the men was interpreting for us and we were just chatting with them. We found out that the Syrian man in the room had been baptized in the name of Jesus the week before, along with four other men and has been reading his Bible ever since! Another man in the room was holding a Farsi New Testament that he was going to start reading later that day. These people who have never had the opportunity to hear about Jesus as their Savior are hearing about Him for the first time.  And because there is nothing else for them to do with their time, they love listening to our stories about Jesus and are happy to read the Bible!
As I've been reflecting on my time in Greece, and what God is doing there, and in all of Europe with the refugees, what I feel like God is calling me to do now is to pray for the refugees and the workers who are there, and to educate people here about the crisis through my direct experience.

This is the testimony of my faithful young friend, who is able to set aside her differences with people of different faiths and nationalities to see people as Jesus sees them ... people that He created; people who desperately need to know Him as the world deteriorates into chaos and lawlessness.
She approached her calling from Jesus with no fear; only excitement, and as she wrote me, "an expectancy for what God is going to do in us and through us as we interact with the refugees."  Note that she didn't say she was "hoping" that God would work in her and through her, but she was "expecting" it!  That is more than youthful optimism.  That is faith in the power of God, and comes from a trust and confidence rooted in her spirit; a spirit that is supernaturally connected to her Creator.
So, now we have to come to terms with the spiritual aspects of this world.  Can you see that the Enemy wants us to concentrate on the very real danger of Muslim extremists, who are used as instruments of wickedness and perhaps, judgment?  But at the same time, can you see that Jesus is still moving and ministering in the world; even in the midst of refugee camps that very likely contain men intent on carrying out more evil? The recent attacks on a restaurant in Bangladesh remind us that Evil is ever present.
And the Bible tells us that, along with this wickedness, mankind will not escape the humanitarian crises that my young friend witnessed.  Earth has become the battleground for the war in the spiritual realm.  And my friend is absolutely correct ... we must pray for the innocent refugees, and the workers who are ministering to them.  We must tell the world about the very real human suffering that is going on.  And, most importantly, we must praise God, who draws people unto Himself through the teaching of the gospel. Thank you, Lord, that people like my young friend answer your call.   It is exciting to hear, first-hand, of the drawing power of your Word to save! And we ask for continuous strength and revelation to do what You need us to do, in the Name of Jesus.  Amen!

Colossians 1:6    "In the same way, the gospel is bearing fruit and growing throughout the whole world—just as it has been doing among you since the day you heard it and truly understood God’s grace."