As I make my way through an in-depth study of the Old Testament, I have lost count of how many times the Israelites and inhabitants of Jerusalem desecrated and profaned God's sanctuary.  Of all the people who have ever lived on the earth, they had been blessed with the presence of the One True God in their midst.  He had built His sanctuary, with the express purpose of dwelling among them, and proclaimed it as Holy; a sacred place, dedicated only to Him.
Yet time after time, the kings and priests of Israel and Judah were tempted to follow after strange gods, defiling the sanctuary of YHWH with the gifts, sacrifices, and idols of foreign deities.  The Books of Isaiah and Ezekiel are full of God's pronouncements of judgment because of such desecration.  And the essence of their sin is pronounced in Malachi 2:11:  Judah has been unfaithful, and a detestable thing has been done in Israel and in Jerusalem. The men of Judah have defiled the LORD's beloved sanctuary by marrying women who worship idols.  The message is clear ... The introduction of the worship of a foreign god in the sanctuary of the Lord is an act of unfaithfulness and a detestable thing.  And it all came about because God's people invited outside influences into the sanctuary. 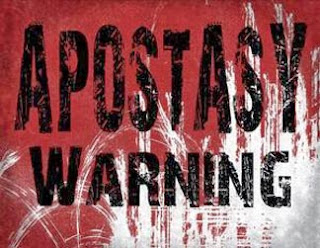 But such irreverence is not exclusive to the ancient Israelites or Jews.  Today, in the 21st Century, it is just as prevalent and profane.  Take, for example, what happened at the General Assembly meeting of the Presbyterian Church USA just a couple of weeks ago in Portland, Oregon.  As part of the "first order of business", Wajidi Said, co-founder of the Muslim Education Trust, led the Assembly in a prayer dedicated to those affected by the Orlando shooting.  This is what he prayed:  "Allah bless us and bless our families and bless our Lord. Lead us on the straight path—the path of all prophets: Abraham, Ishmael, Isaac, Moses, Jesus, and Muhammad... In the name of Allah, the beneficent, the merciful, let us praise the Lord ... Peace be upon them and peace be upon Allah." Said also prayed peace on the "bigots" and "Islamaphobes." What?  No prayer for the soul of the radical Islamic terrorist who caused such death and chaos in Orlando?
I guess it should come as no surprise that this offensive prayer alternative came at the behest of the Ecumenical and Interfaith ministry staff at the assembly.  Satan's war against the Body of Christ is evident in the popular move towards ecumenicalism and universalism in the Western Church.   And Satan loves nothing more than to see Jesus, the Son of God, placed on equal footing with a prophet called Muhammad (a man who is recorded as murdering 600-900 Jewish men, some as young as 13).
While Satan might be applauding the desecration of the House of God, I grieve over how it offends our Lord.  This is no different than the worshipping of false idols in the ancient Temple in Jerusalem, and we know how God viewed that!  To declare "In the Name of" anyone but Jesus, is not only blasphemous, but it mocks the holiness of YHWH and His Son.  This prayer was intentional -- designed to lift up a false and foreign god above the name of our Lord ... and in His own House!
I predict that we will soon see the Presbyterian Church USA become irrelevant and ineffective; perhaps the forerunner of the apostate Church prophesied in Scripture.  I have seen it happen in a former church I attended.  An imam was invited to preach from the pulpit by our pastor, who promoted tolerance and open-mindedness toward the Islamic faith; an acceptance that our God and his god were somehow equal.  Within a couple of years, that pastor was silenced with Parkinson's disease, and I have often wondered if it was coincidental or God's discipline for inviting the worship of a foreign deity into our sanctuary.
You see, God established His sanctuary in the ancient Temple as the primary place where He manifested His presence in the midst of His people and, therefore, it became the preeminent place of worship.  The same should be said of our Christian Churches ... God's presence resides in our houses of worship, and we should be standing in awe and fear of this, just as when the ancient Israelites "trembled" at the Lord's appearance on Mount Sinai.  Yet, I think we have come to see the sanctuary/church as belonging to us --- a place we come to exalt ourselves as "Christians"; a place where we build coffee shops, bookstores, and children's centers that rival the local arcade.
We have forgotten that God's character never changes.  He warned the unfaithful Israelites that He would completely abandon His sanctuary if His covenant people abandoned him ( 1 Kings 9:6-7 ; 2 Chron 7:20 ), a threat he eventually acted upon.  Do we not think He will do the same if we profane His sanctuary today?
At  at the conclusion of the General Assembly session, the Rev. Gradye Parsons of the Presbyterian Church USA, offered an apology to anyone who was offended by the prayer to the foreign god. He assured the congregation that mistakes can be made, but the prayer was not an intentional one.  "It was never the intention to offend anyone, and we offer an apology to those who were offended."  Apparently, there were some who were upset and aggrieved, and that speaks to their reverence for YHWH.  But did it never cross the mind of the good Reverend that they should repent and ask for forgiveness from God, Himself; from the One who was most offended?
Sadly, I do not think that this will be the end of such transgressions against our God in Christian sanctuaries.  The writing is on the wall, as we see more and more churches compromise their covenants with God, as they seek to establish a blending of religious faiths.  From the Pope on down, universalism is the byword, and I dread the repercussions that will come upon the Church!

Psalm 4:2    "O sons of men, how long will My honor become a reproach? How long will you love what is worthless and aim at deception?"