In Their Own Words: War Has Been Declared! 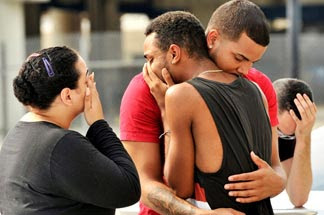 This is a very difficult post to write.  My heartbreak over the terrorist attack in Florida comes from the depth of my human faculties.  And I will admit that my flesh and my spirit discern this tragedy from different perspectives.  I want to try to describe to you what is going through my mind, as well as what is being revealed to my spirit.  This is a convoluted and divisive situation, and my opinion is full of twists and turns.  I fully expect that my viewpoint will not be universally accepted, whether one is secular or Christian.  But this is an exercise of trying to figure out exactly where I stand on multiple issues, and I hope it will give you pause to think about your own faith and our shared humanity.
I had a heartfelt discussion this weekend with a very dear friend who happens to be gay, and who came to this country from Israel as a teenager.  He told me that "it was the Constitution and Bill of Rights that inspired him to become a US citizen."  His maternal grandparents survived the Holocaust camps, and his father fought in the Israeli War for Independence in 1948.  Both his parents served in the Israeli military, fighting in the Six Day War in 1967 and the 1973 Yom Kippur War.  The spiritual war against God's chosen people has been imprinted on his DNA.
My friend told me that his grandparents' experiences in the camps, along with their survival and the tenacity and sacrifice of his parents (to give him a better life) has given him both strength and conviction regarding his faith and our freedoms.  He told me that having survived Hitler's murderous regime, his grandfather "continuously warned that what happened with the policy of appeasement by governments, and that [the] hatred of Jews and Christians would happen again during my lifetime."  And now, we see evidence of that in Orlando, Florida.
Coincidentally, you may have easily dismissed the killing of singer Christina Grimme in Orlando just one day prior to the travesty at the Pulse Club.  Allegedly, police now suspect that her murderer traveled from St. Petersburg to Orlando, a distance of some 107 miles, with the specific intent to kill the contestant from NBC's 'The Voice" -- possibly because of her outspoken Christian views.  Here is an excerpt from her webpage:   In the western world, especially American civilization, when asking for a person's religious standing, the most common response you will encounter is simply "I'm a Christian." Most people subtly just think to themselves "Oh, okay good. I was worried for second." But as I have traveled to Israel recently, fervently prayed and studied Scripture, and examined the culture around me, I have found that when someone says "I'm a Christian," I should be more worried for their soul than if they said "I'm an atheist."
Before you stone me to death with your subconscious judgment, let me explain. If you will, come explore with me what it should look like when a person claims Christianity. Come with me, and let's take a look at the most overused word in the English language. What is this "Christian" stuff all about anyway?
Here was a young woman who obviously took her faith seriously, and was beginning to ask serious questions about what it means to be a Christian.  I suspect that she was becoming outspoken and challenging her generation to start recognizing their position in the Kingdom of God.  And the Enemy needed her silenced.  So can her untimely death be associated in anyway with a jihadist terrorist who slaughtered so many of the gay community in Orlando?  I think it can, and here is why.  It is time that we Christians understand the reality of a single Bible verse.  It is Revelation 12:7 and here is what it says:  Now war arose in heaven, Michael and his angels fighting against the dragon. And the dragon and his angels fought back. 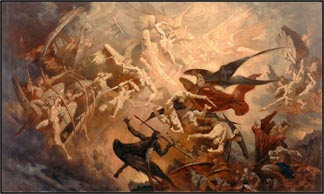 Revelation 13:7     "The beast was permitted to go to war against the saints and conquer them.  He was given ruling authority over every tribe, people, language, and nation,"