The Truth Behind Those May Day Clashes 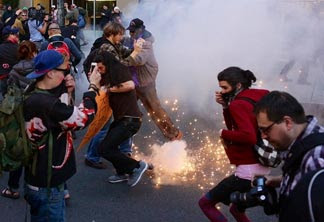 This last weekend, we witnessed the annual public homage to anarchy as expressed in May Day riots and protests.  Flares, bricks and Molotov cocktails were thrown at police in Seattle in an effort to communicate hatred for anti-capitalism, and passion for workers and immigrants.  Demonstrations were held across the country, from Los Angeles and San Francisco to New York, and towns and college campuses in between.
But did you know that May Day protests and rallies were held world-wide?  France, Turkey, Russia, Great Britain, the Philippines, Taiwan, and Brazil all saw groups gather to protest everything from low wages, to the lack of jobs, to immigration problems, to failing government policies.  But the over-riding sentiment was a call for disorder due to the nonrecognition of authority.  I think one of the underlying themes of these current May Day demonstrations could best be summed up by a sign carried by one of the protestors:  "We Are Ungovernable."
Before I tell you what I think is at the root of that belief, I'd like to share some of the interesting history behind the modern May Day observances.  There are some websites, like Jacobin, (whose theme is "Reason in Revolt") who pay tribute to their namesake.  The Jacobins were the most radical and ruthless of the political groups formed in the wake of the French Revolution.  Although they called themselves "Friends of Freedom and Equality", they colluded with the French politician, Robespierre, in what became known as the Reign of Terror in 1793-94.
An article in Jacobin will tell you that "the first May Day was celebrated in 1886, with a general strike of 300,000 workers at 13,000 businesses across the United States. It was a tremendous show of force for the American labor movement, which was among the most militant in the world."  Here, we see the foundation of the various protests and clashes with police this past weekend.  But let me continue with some of their other views of May Day.  They urge modern protestors to rally "under the banners of anarchist and socialist organizations" ... and they believe that "when workers act together, they exercise tremendous power over their employers and over society as a whole. Working-class radicals [understand] the unique power of collective action, fighting to ensure that the aggression of employers is often met by a groundswell of workers’ resistance."
Today, they advocate for May Day to be recognized as a day of solidarity with undocumented immigrants — a fitting reminder of May Day’s origins in the late 19th Century when successive waves of immigration brought millions of immigrants to the United States, and high unemployment and dehumanizing working conditions spawned a movement that saw native-born and immigrant workers standing together to defend their common interests.
All that is the history behind what we saw this past Sunday.  But did you know that the significance of May 1st is much broader than what it means to the work force?  And that it is much older?  The website InfoPlease tells us that it's a celebration of Spring. It's a day of political protests. It's a neopagan festival, a saint's feast day, and a day for organized labor. In many countries, it is a national holiday.
They go on to give us a white-washed version of some of these celebrations, such as May 1st as Beltane, a pagan Celtic feast full of rituals.  One of these traditions centered around Beltane cakes, which would be broken into several pieces, one of which was blackened. They would be drawn by celebrants at random; the person getting the unlucky blackened piece would face a mock execution. 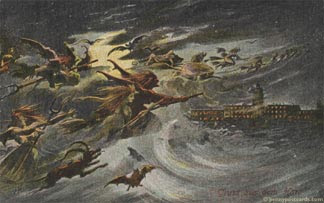 Then there is Walpurgisnacht, creatively portrayed in the Walt Disney movie Fantasia, during the "Night on Bald Mountain" segment, and to which I have devoted a post.  InfoPlease wants you to believe that this holiday is just a legend; one in which witches were said to meet with the Devil on the eve of May 1, on the Brocken peak. The night of April 30th became known as "Walpurgisnacht," and the annual meeting was dramatized by Goethe in Faust.  It's just a legend, they say; like a fairy tale .... albeit a terrifying one!
And how can we forget that idyllic symbol of May Day, the Maypole?  The pretext of modern celebrations of May Day is that it honors ancient festivals of Spring and Fertility, in which a pole would be hung with greenery and ribbons, brightly painted, and decorated.  Dancers would then begin to braid the ribbons by weaving in and out among each other.  All in all, it is presented as an innocent celebration of Spring.
I don't mean to burst your bubble, but from the picture of pagan festivals, and celebrations of Spring, down to workforce protests, there is a far more sinister element to this first day of May.  To begin with, that innocent vision of the Maypole?  It is actually an ancient symbol of fertility and also the Egyptian God and King Osiris' phallus.  (And don't forget that Osiris is simply another name for the spirit of Nimrod, who was the original man who resisted God's authority and led a rebellion at the Tower of Babel). 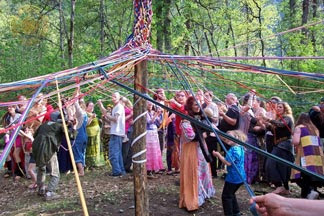 The Maypole is a modern-day portable ancient phallic symbol that is meant to represent the male generative powers in the phallus, which is really just an idol or image of an erect penis. They have been worshiped for thousands of years as a reminder of the sacred act of sex and also represent the phallus of the kings who rule the world.  If you really want to take this piece of information to its full conclusion, then click here.
What I really want you to see is the spiritual forces that are behind these festivals and movements.  And the modern slogan of "We Are Ungovernable" should tell you exactly who is at the head of these forces, and how he has managed to maintain that spirit of rebellion and anarchy throughout the centuries.  It is my strong belief that "legends" don't persist if there is not some truth to them,  or some force behind them, perpetuating and encouraging an underlying power to continue indefinitely.
I find it rather interesting that this one day at the beginning of May has become synonymous down through the ages with mock sacrifice; with homage to the power of men; and with resistance and opposition to Authority.  Who does that remind you of?  The spirit of Nimrod might be at work to compel mankind to overthrow any governance over his life, but we must not lose sight of the fact that  Lucifer was the power behind Nimrod -- Lucifer, whom God called "the anointed Cherub"; the one whose position was to guard the very throne of God. His position was that of protecting the holiness of God. Satan had the highest of all positions, a position which he despised and lost.
So it has been his mission ever since to convince men that we, too, should rebel against God.   He whispered in Nimrod's ear his own vow: "I will take over heaven, I will be God." That is Lucifer/Satan's sin and that was Nimrod's sin in erecting the Tower of Babel.  And now that spirit of rebellion is present in everyone who listens to that lie -- and there is even a day Satan has made one of his holy days --- May 1st. He does not want to be God's servant. He does not want to do what he was created to do. He wants to be served and there are millions who have chosen to do just that; serve him and worship him through the various festivals and protests. They have listened to his lies and chosen to follow him.  They may think they are "ungovernable", but one day soon, the One who will come to rule and reign will show them just how deceptive that lie is.

1 John 3:8    "The one who practices sin is of the devil, because the devil has been sinning from the beginning. For this purpose the Son of God was revealed: to destroy the works of the devil."
Posted by Pam Kohler at 7:00 AM