Just A Few Cracks In The Moral Wall of America

I recently ran across an article on a website called The Truth which outlined 100 Facts that have contributed to the moral collapse of America.  I'm not going to spell them all out for you; if you're interested in seeing the entire list, you can click here.
But I would like to highlight just a few that I think we can all agree have led to the breakdown of our moral fabric, which in the end leaves us vulnerable to both physical and spiritual attack.  And I will admit that it is hard to think that this country, in which I have believed since I was a child, could ever be anything but the "beacon of freedom and an example of the best of humanity".  But all any of us have to do is look around us and we can see that our foundation of faith has been excoriated and criticized, which has led to moral compromise in order to gain ungodly acceptance.
The truth is, we have been in the process of decay for a few decades now, and everything from our homes and family, to our forms of entertainment, to our government, to our military all show signs of degradation and degeneration.  We are simply in decline.  Here are a few of the things that have contributed to the cracks in our moral wall: 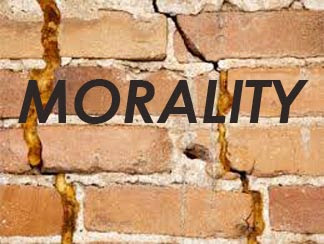 Email ThisBlogThis!Share to TwitterShare to FacebookShare to Pinterest
Labels: Morality