From Boredom to The Beast

Can you contemplate the possibility that with all the distractions we have in this Age of Technology, that we could actually find ourselves "bored" in our day-to-day lives?  By bored, I mean that we have become so over-stimulated by Facebook and all the other social media avenues, that if we are not constantly hooked up to it, then we feel we are missing something.  By bored, I mean that our brains are so aroused by the highly visible special effects in action movies, or the explicit and graphic sex scenes in R-rated movies and TV, that our normal everyday existence can seem unexciting and discouraging. 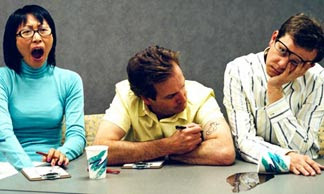 Basically, the more we are entertained, or stimulated, or engaged in sharing our every waking moment, the more we need of whatever triggers a sense of excitement in our lives.  In other words, we don't want to tolerate the average; we want more of the sensational.  That's why people are bored at their jobs ... sitting in meetings, or writing reports becomes intolerable and tedious.  Listening to a professor lecture, or studying for exams becomes monotonous and uninspiring.  Changing diapers, doing laundry, or preparing meals for your family becomes repetitive and mind-numbing.  We have become so accustomed to the instant gratification of our technology, and so reliant on it to take us outside our normal existence, that we cannot appreciate our "real" life.
Dr. Sandi Mann, Senior Lecturer at the School of Psychology, University of Central Lancashire, writes, "Our attention spans are now thought to be less than that of a goldfish (eight seconds). We are hard-wired to seek novelty, which produces a hit of dopamine, that feel-good chemical, in our brains. As soon as a new stimulus is noticed, however, it is no longer new, and after a while it bores us. To get that same pleasurable dopamine hit we seek fresh sources of distraction ... Does any of this matter? Research suggests that chronic boredom is responsible for a profusion of negative outcomes such as overeating, gambling, truancy, antisocial behaviour, drug use, accidents, risk taking and much more. We need less, not more, stimulation and novelty."
Of course, all of these negative side effects of boredom are alarming, especially when they result in keeping us from reaching our full potential.  But let me tell you about another side effect that secular psychologists like Dr. Mann may not consider. As a member of the pre-Millennial generations, it is pretty easy for us to see the consequences of our rapidly increasing technology -- in effect, we can measure it from a "before and after" perspective.  It is easier for me to see the negative ramifications of too much technology in my life because I have reference points ... I remember what it was like to actually engage in a face-to-face conversation, or at least telephone conversations with friends or loved ones.  So when I find myself avoiding that personal interaction in favor of non-verbal phone texts, I can recognize that I need to disengage from technology and make that human connection.
Or, I can remember when the entertainment I chose to watch was more wholesome and respectful of human relationships and the family, so when I see something in a movie or TV show that transcends those older moral values, I can recognize that it is probably not something that I need to expose myself to.  But the Millennial generation has only known the continuous, highly suggestive version of the most creative minds in the technology and entertainment industries.  And here is the area in which I am most concerned ... when those two businesses combined forces, this generation of kids and young adults have been inundated with a steady diet of ever-increasing supernatural concepts.  They receive it in their video games, in online movies, in their music, on TV, and even in books (if they can take the time to read one).
Harry Potter books, to Katy Perry's songs, to The Twilight movie series, to The History Channel, to The Terminator, Transformers, Aliens, Star Wars and Star Trek; all of which have spanned a couple of generations in successful movie franchises.  There is even a video game called Supernatural!  Our kids have been shown so much of the supernatural in movies, books, and music that they want to see a demonstration of it in their everyday lives.  It's become such a part of their psychological makeup that they instinctively know it is real, but it's never talked about. 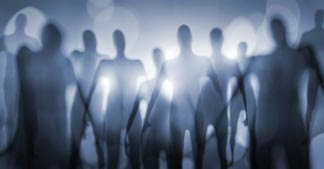 Think about it ... witches, and aliens, and demons abound in all those sources of entertainment that I just mentioned.  The Supernatural has been featured in everything from the
Their parents don't know how to explain it; the Church can't address it, because it has nearly lost the supernatural sense of its own Bible and the God it serves.  So, out of boredom, or restlessness, or dissatisfaction, or just the sense that life has become too slow and dull, they begin looking for further stimulation, and sadly it often leads to the dark side.  I'm afraid that we have failed to recognize this in our youth.
It can be something as evident as a young man or woman, who was raised in the Church, and begins to question the validity of God, and ask all the questions that are natural in our human frailty ... Why would God let a young child die tragically? Or, Is there really life after death?  But sadly, technology is expanding those questions and doubt.  They now begin to think thoughts such as This God I've been told about all my life is too restrictive, and following Him is not very exciting.  The internet is showing me that I can astral project and actually leave my body and experience supernatural trips.  I want to experience what's beyond this realm NOW! Maybe there's more out there than what God is offering me here.
During a trip to minister to our wounded warriors at The Fisher House at Fort Sam Houston, one of the chaplains shared with our ministry group that he was having a difficult time getting the young soldiers in the Army to attend Bible study classes he taught.  When he questioned a few of them, they said that Christianity was too boring; they preferred attending classes taught by the Wiccans or the Muslims because they were more exciting and stimulated their imagination.  We have gone so wrong in the Church by refusing to recognize, embrace, and teach that the Bible is a supernatural book about our Supernatural God!
But the Enemy has not been so shy.  He has taken advantage of our reticence and twisted the supernatural aspects of our faith, and exploited it for his own benefit.  So our kids instinctively know that the supernatural exists, but they've only been shown the dark side's version, and with the help of technology, they have been convinced that this version is not simply the only version of the supernatural, but it is more real and true for their lives than the staid and conservative paradigm of their parent's theology.
Those of us who see clearly what the Lord wants us to know for this time and age, are aware that the supernatural is about to collide with this realm.  And it is imperative that we strengthen our younger generations with the Truth of just what a Supernatural God we serve.  We cannot let the boredom that this generation perceives be used to lead them away from the most exhilarating and intoxicating and enthralling relationship they will ever have, this side of Heaven.  We cannot refuse to see the supernatural in our Bible and we must share the truth that Jesus constantly interacted with the natural realm supernaturally.  We can to, through the power of the Holy Spirit!  And that's anything but boring!

Acts 9:11-12    "God did extraordinary miracles through Paul, so that even handkerchiefs and aprons that had touched him were taken to the sick, and their illnesses were cured and the evil spirits left them."
Posted by Pam Kohler at 7:00 AM