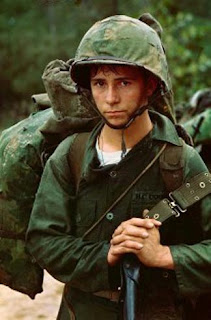 Today is the day that our nation honors the warriors who have fought and sacrificed their lives for our freedom.  They answered the call and put their own lives aside in order to serve others and something greater than themselves.  It is an act and a life choice worth honoring, and I pay tribute to all those, in the history of our country, who have given me the opportunity to live in liberty, without being enslaved to a tyrant or oppressive ruler.  We have been fortunate in this country to have experienced such unparalleled freedom.
But today I would also like to honor those spiritual warriors of the Bible, who long ago made those same sacrifices and answered a call that benefitted each and every one of us.  Just like our modern soldiers who are well trained and equipped in the art of waging war, these spiritual warriors were trained by God to identify the enemy and his tactics.
If you really think about it, in the Bible, our faith is often compared to warfare. Indeed, it is a very real aspect of the way that those who follow Christ must live. Those who desire to live this way will face many battlefield and battles that MUST BE WON if we are to make it into the kingdom of God, and defeat the enemy. There is effort involved—energy must be expended in the day-to-day life of a true Christian -- fighting the attempts of Self, Society and Satan to disrupt our relationship and eternity with Christ.  Yes, Christ's sacrifice on the Cross and our belief in Him gives us an entry into the Kingdom via trusting Him and having confidence in what He has done on our behalf (faith).  Our decision binds our spirits with Him, but once that decision is made, we must face the fact that the rest of our lives will find us in battles for our souls (our minds, will, and emotions).
Just as our forefathers had to recognize and identify our nation's enemies in order to keep us free, we must realize that our Spiritual war is a war between the forces of God (including angels) and saved humanity versus Satan and his fallen angels.   Just as on the battlefields of the Revolutionary War, the Civil War, WWI, WWII, the Korean War, the Vietnam War, and the continuing wars in the Middle East, the Spiritual war is being fought in heavenly realms on the battlefield of the minds of humanity.  This physical world is merely a byproduct of the events taking place spiritually.  When souls come to salvation, territory is taken away from Satan.  It is a battle of strategy and ultimate power.
And fortunately, we have some great role models of men in this physical world who battled the enemy successfully and won vital territory for mankind.  Each one of the apostles answered the call to advance the campaign against the enemy and claimed new territory for God's Kingdom.  And each of them paid the price with his own life.  At least two were crucified (Peter and Andrew), and eight of them died martyr's deaths (James, son of Alpheus, was thrown down from the temple by the scribes and Pharisees; he was then stoned, and his brains dashed out with a club). 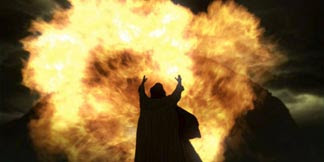 Perhaps one of the most extraordinary examples was the Prophet Elijah.  I agree with one website, that says, "Elijah stands out in the Old Testament as [one of] the great Spiritual warriors.  He was the prophet to Israel during the Baal counterattack when only 7,000 believers were left in the Northern Kingdom.  He opposed the Evil King Ahab and Jezebel, his wife, the foremost example of the Prostitute of Babylon.  Elijah and Moses are believed, by some, to be the two witnesses who will be called back to serve in the Tribulation in Israel's darkest hour.  And Elijah's prophecy of no rain for 3.5 years will become the standard for the division of the seven years of the Tribulation (in half) to mark the beginning of the Great Tribulation."
Elijah's service to God and Israel was costly and difficult, and he was tested in his battles and fought his own weariness and reluctance.  But God always provided shelter and sustenance, and fortified him in his moments of doubting.  And just like us in our spiritual warfare, Elijah had to learn some important lessons in surrendering to the power of Christ in order to fight the devil.  He had to learn that he had his eyes on himself and his problem, and not on the Divine solution; that (at times) his normal methods of fighting off the attacks of the enemy were not working.  That's when the Lord humbled him and demonstrated His power in three Judgments: a storm, an earthquake, and fire. (1 Kings, Chapter 19).  The three Judgments were followed by "the sound (whisper) of a gentle breeze", which symbolized a paradigm shift in Elijah's warfare tactics and he became aware that he could become more effective by partnering with Christ.  With this new strategic objective, Elijah moved into spiritual maturity, and he was instrumental in defeating Ahab and Jezebel, satan's instruments.
It is not lost on me that the continual wars that the world faces are spiritual in nature.  I believe that satan has placed his partners in strategic geographical areas of the world in order to further his cause and promote conflicts, campaigns, and bombardments (all with spiritual implications).  Just as our modern soldiers form "bonds of brotherhood" in their theaters of war, we, too, must form partnerships with our fellow warriors.  And, together, we must work with Jesus and the Holy Spirit to carry out their commands, being equipped with the Authority and Power mandated to us.
Like Elijah, we are not born spiritually mature, but by answering the call of our Lord, we can discern that we are each born for a purpose -- to confront the greatest evil in the history of mankind.  We can be effective spiritual warriors by recognizing that we have the Law of the Lord written on our hearts, and we live by His Grace through our faith and obedience.
Today, we honor and memorialize those military warriors who have died for the perpetuation of our earthly freedom.  Let us not forget those Biblical warriors who perished for our spiritual freedom. Every warrior's death is important in the eyes of God.  He chooses the time, place, and manner of death.  War is a horrible part of our human existence, and we must never forget that it is not God's desire.  But, even in the midst of such battles, God can be glorified.  As we approach the enemy's endgame, we can rejoice that our Victory has already been won.  In the meantime, we must ask for more of His Spirit, His help and His protection—along with the strength, desire and determination needed to fight each and every battle, each and every day. So, I continually pray for all of our warriors, past and present, and God’s people and the ministry of effective spiritual warfare.

2 Timothy 2:3-4   "Take with me your share of hardship [passing through the difficulties which you are called to endure], like a good soldier of Christ Jesus.  No soldier in active service gets entangled in the [ordinary business] affairs of civilian life; [he avoids them] so that he may please the one who enlisted him to serve."