The Lure Of The Supernatural: Where The Church Has Failed Our Youth

I'm going to make a little detour in today's post and write about something that my spirit is just screaming about.  I remarked in an earlier post that we, in the modern Body of Christ, who are called "The Church", have a difficult time admitting the existence of the unseen world.  What goes on in the spiritual realm is largely unknown to us, and frankly, is considered both borderline heresy and scary -- if we allow ourselves to consider it at all.
But here's what that blindness has accomplished... it has given satan the opportunity to lure our kids (both Christian and secular) into that invisible realm without any sound Scriptural discernment to avoid the perils.  Through the fantastically rapid advancement of technology and the entertainment industry, our kids have been inundated with videos, movies, and computer games that invite them to interact with the spirit world.  They are enticed with the offers of secret powers, unabashed freedom, and out-of-this world (literally) adventure -- all without the rules and control that they are told are part of Christianity.
Kids raised in the Church are kept innocent (and ignorant) of the truth about the supernatural and spiritual realm and how it is interwoven throughout the Bible.  The world shows them creative images of magic, spiritual powers, and the ability to interact with cosmic creatures, but the Church says nary a word of Paul and Isaiah being taken out of their bodies and visiting the spiritual realms as a spirit being.  They are also not taught that Jesus was tempted by satan, just as they are, and was shown "other worlds" where He was promised power, fame, and riches.  But with each temptation, Jesus knew how to fight back ... with the Word of God.  And seeing that he could not defeat Jesus, the devil left him.  We, and our kids, have that same ability to defeat the enemy by speaking the Word and calling on the Name of Jesus.  But, sadly, this generation of youth are unaware that they are opening themselves to satanic attacks by seeking these diversions, and they haven't a clue how to fight back.
In effect, modern Christianity is largely seen as impotent and "boring" by our youth, while the spiritual realm is portrayed as daring, heroic and superhuman.  With this diminishment of the Authority and Power of Jesus and God, our kids begin to question and compare their perception of one-dimensional Bible characters with the larger-than-life, multi-dimensional, heroic figures they see every day on their computer and movie screens.  And they are opening themselves up to the dangers of the dark side and "spiritual forces of wickedness" that Paul tells us are very real.
Case in point:  A dear friend's discerning son came home from the movie theater this past weekend and said, "Mom, you have to see the trailer for the new movie, Dr. Strange".  After watching it, she called my husband and me, and we were astonished at what this movie is showing our kids --- but not at all surprised. 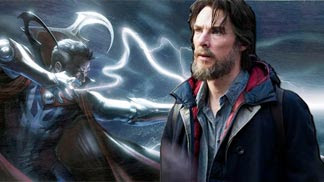 Here is a synopsis of the movie plot:  The movie is a spin-off of the Marvel Comics character, Dr. Strange.  It is the 14th movie of the Marvel Cinematic Universe, (MCU) and distributed by Walt Disney Studios (that should be your first clue that it is not an "innocent" family movie).  I also found it disconcerting that MCU was referred to as an American movie franchise and shared fictional universe that is centered on a series of superhero films.  So, keep in mind that not only is Dr. Strange going to be presented as a superhero (meaning, "good guy"), but the movie promotes the idea of a "fictional universe" with events, and often elements, that differ from the real world.  It can also be indistinguishable from the world in which we live, thereby suggesting that there is nothing to fear in this invisible universe, and it is interchangeable with our world, and accessible.
But back to the plot:  Doctor Strange was an egotistical but very brilliant surgeon. After a car accident destroys his hands and hinders his ability to perform surgery, he searches the globe for a way to repair them and encounters the Ancient One. After becoming one of the old Sorcerer Supreme's students, he becomes a practitioner of both the mystical arts as well as martial arts. Along with knowing many powerful spells, he has a costume with two mystical objects - the Cloak of Levitation (gives its wearer the ability to levitate and fly) and Eye of Agamotto that gives him added powers (inspired by the All Seeing Eye of the false god Buddha). Strange is aided along the way by his friend and servant to the Sorcerer Supreme, Wong, and a large assortment of mystical objects. He takes up residence in a mansion called the Sanctum Sanctorum, located in New York City. Later, Strange takes the title of Sorcerer Supreme.
I could write volumes about the personification of Dr. Strange by the creator of his comic book character, Steve Ditko, but I think you get the picture.  What was alarming to me was the rather casual way Ditko referred to the character as being involved in black magic, as having become the host to a dangerous demon in New Avengers, and as the leader of the Black Priests.  Ditko's Dr. Strange is also described as the right-hand man of Doctor Doom, who has become the ruler and god of this world.  And did you get it that Ditko even has the audacity to call the New York townhouse where Strange lives, Sanctum Santorum, which is the name for the Holy of Holies in the Jewish Temple.  Another part of the Dr. Strange legend involves a plot line where, as the Ancient One's disciple, Strange encounters the entity Nightmare, and other mystical foes before meeting Dormammu, a warlord from an alternate dimension called the "Dark Dimension". Are you getting the picture?  And do you see the mockery being made of the Bible?  This guy is bad news, yet he is portrayed as a super hero, and our kids are eating it up because they do not have the spiritual eyes to see the deception. 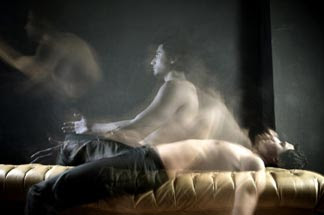 This movie is only the tip of the iceberg in regards to the deception being spoon-fed to our kids.   Dr. Strange openly, and enthusiastically, encourages the "hidden world of magic," and includes alternate dimensions like the Astral Plane.  What is that, you might be asking?  The Astral Plane is the "realm of minds" that only telepaths and magic users are able to visit.  Since the Dr. Strange character was created in 1963, Strange has used astral projection to travel outside his body and engage enemies in this strange dimension.  And I can assure you that kids in your community are seeking to do the same thing!
Do not think they are "unchurched" or "lost" kids, either.  Our kids who grew up in Sunday School  are just as fascinated with astral projection and black magic; and they are engaging in it.  But what horrifies me is that they haven't a clue what force is behind these exciting new adventures.  They don't know what is waiting for them out in "the parallel universe".  These entities are powerful and they are real -- and they are very, very dark.
If all this scares you, it should.  We have a generation of youth that is actively seeking to engage with the dark side, but they do not see that it endangers their immortal souls.  It is not make-believe, nor mere fantasy.  It is waiting to seduce them and attract them with promises of excitement; the potential for expanding their minds and consciousness; and the suggestion of obtaining greater knowledge than that of the Christian God.  Is it too late to save them from this false message of enlightenment?  I pray not, but right now, the Enemy's box office hype is drawing them like sheep to the slaughter.  If only they were as excited to flock to supernatural Scripture like the following ....

2 Corinthians 12:3-4     "And I know that such a man—whether in the body or out of the body I do not know, [only] God knows— was caught up into Paradise and heard inexpressible words which man is not permitted to speak [words too sacred to tell]."

Email ThisBlogThis!Share to TwitterShare to FacebookShare to Pinterest
Labels: The Supernatural