It's A Matter of Recognition and Our Authority

It has been my experience that the question of our Authority on earth to wage spiritual warfare has been one of the biggest hangups for Christians.  In fact, that is usually the first argument I get whenever I try to broach the topic.  I will hear something like this:  "Yes, the Apostles were able to cast out demons, and heal the sick, but all that ended with their deaths."  This is pretty much the basis for a theological position called Cessationism.
In strict theological terms, this refers, in Christianity, to a doctrine that says "spiritual gifts such as speaking in tongues, prophecy and healing ceased with the original twelve apostles".  Notice that, in this definition, casting out demons is not even mentioned!  Yet, the apostles did that work, too.  So, in the intervening centuries, the Church has simply glossed over these facts and no longer even knows how to address it.
And, now that Believers are awakening to the Truth of John 14:12, we are having to determine just how we regard this important part of our commission as workers in the Kingdom.   (Please take the time to click on the link and see these important words from our Savior).
With that counsel from our Lord, I have seen, in my newfound knowledge, two distinct disciplines:  Healing and Deliverance.  We will explore those in coming days, but for now I will tell you that, in my opinion, Healing is using the authority and power from Jesus and the Holy Spirit to bring the healing of physical ailments to suffering Christians.  The ministry of Deliverance finds us using our authority and Their power to help heal the spiritual wounds caused by the Enemy's attack on their flesh and soul.  Very often, both of these disciplines work together because there is interaction between the spiritual and physical realms, and they affect both the spiritual and physical parts of us.  In other words, Jesus asks us to work with Him and the Holy Spirit to help "set the captives free" from demonic oppression -- this is one of the "things He did", as mentioned in John 14:12, and to which He wishes us to do in even greater "outreach and extent".
This concept that there is interaction between the spiritual and physical realms is also a difficult position for Christians to accept.  That's why I said in yesterday's post, that we modern Christians "don't see the unseen world from the same point of view as the ancient Biblical writers."  They were familiar with the invisible world of the spiritual realm.  They interacted with it!  Let me give you these few examples from various passages in the Bible: 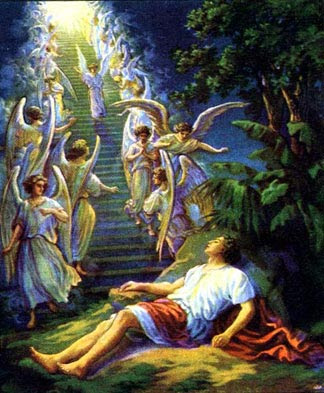 •  In Genesis 28, Jacob was given a clear vision of interaction between the physical and spiritual realms.  He dreamed that there was a ladder (stairway) placed on the earth, and the top of it reached [out of sight] toward heaven; and [he saw] the angels of God ascending and descending on it [going to and from heaven].  Jacob may not have fully understood what he was seeing in his dream, but he awoke with the realization that "Without any doubt the Lord is in this place, and I did not realize it." He knew that God had interacted with him, and that his physical world had been affected by the presence of God coming to him from the spiritual realm.
•  Moses certainly experienced the interaction of the spiritual with the physical, when he witnessed the burning bush and the voice of God in its midst.
•  The prophets in the Old Testament continually gave witness as intermediaries between the spiritual and physical worlds for people who could not see. False prophets spoke from their own minds and imaginations.  God opened the eyes of His prophets so they could see into the spiritual realm and explain what they saw to the people.  Ezekiel saw wheels moving in unison.  Isaiah saw "the Lord, high and exalted seated on a throne; and the train of his robe filled the temple."  He also saw the angels that surrounded that majestic throne.  Elisha was able to assist his servant to see into the spiritual realm during a frightening episode when their city was surrounded by an army of horses and chariots.  Elisha prayed, "Open his eyes, LORD, so that he may see." Then the LORD opened the servant's eyes, and he looked and saw the hills full of horses and chariots of fire all around Elisha (2 Kings 6:17).
•  But it wasn't only the Old Testament Prophets and Patriarchs who had knowledge and experience of this interaction.  Stephen described what he saw in the spiritual realm, just as he was about to be stoned to death:   "Look," he said, "I see heaven open and the Son of Man standing at the right hand of God" (Acts 7:54-56).   Peter was released from prison by a spiritual intervention:  "Suddenly an angel of the Lord appeared and a light shone in the cell. He struck Peter on the side and woke him up. "Quick, get up!" he said, and the chains fell off Peter's wrists" (Acts 12:7).
Even Jesus, as fully man, encountered the spiritual realm while on earth.  His baptism saw an intrusion of the Holy Spirit (in the form of a dove) from the spiritual realms, and the voice of God confirmed it.  And I sometimes think we Christians forget that Jesus's ministry on earth always originated in the spiritual realm of Heaven.  Jesus continually tells us that He only did what His Father had shown Him.  How could that be, if He wasn't being shown things in the spiritual realm?   And how can we dismiss what happened at the Transfiguration? Jesus parted the curtain between the physical and spiritual realms, so Peter and John could see that Moses and Elijah were living with God!
•  While all these examples show us that there were many good and glorifying experiences of interaction between the physical and spiritual realms, we must not ignore that the Enemy also has used this ability to interact with this world.  When he tempted Jesus in the desert, he was able to show Him, in the spiritual dimensions, all the things of power and fame he could give Him, if Jesus would  only bow down and worship him.
And I find another interesting episode of interaction in the storm which arose when Jesus accompanied the apostles on their boat.  The Greek translation says that "a great storm arose in the sea, an earthquake of the sea, its waters stirred to their depths".  This suggests to me that the forces of darkness understood that Jesus was a risk to them.  He was casting out demons, and they were powerless.  He was healing the people they had inflicted with sickness. They knew that they had to deal with him, before He really got going. So they stirred up the sea and the wind in an effort to kill Him.  That's why He rebuked the wind in the same way as He rebuked the evil spirits He was casting out in people.
Can you see how both God and the devil -- both Good and Evil -- are able to interact with us through the overlapping dimensions of our physical world with the spiritual realm?  There are many more examples in the Bible of such experiences, and if Christians throughout the centuries (after the inspired Word of God had ended) were to write down their testimonies of spiritual interactions, it would fill untold numbers of manuscripts!  And guess what?  It is still happening, whether we recognize it or not! 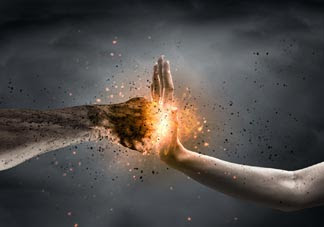 1 Corinthians 2:13     "We also speak of these things, not in words taught or supplied by human wisdom, but in those taught by the Spirit, combining and interpreting spiritual thoughts with spiritual words [for those being guided by the Holy Spirit]."