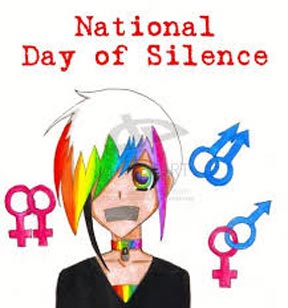 You may, or may not be aware, but one week from today, April 15th, the welfare of our children will be under assault.  No, I'm not talking about Tax Day.  I'm talking about "The Day of Silence" that is being promoted by the Gay, Lesbian & Straight Education Network (GLSEN).
The professed purpose of the GLSEN Day of Silence is that it is "a student-led national event that brings attention to anti-LGBT name-calling, bullying and harassment in schools. Students from middle school to college take a vow of silence in an effort to encourage schools and classmates to address the problem of anti-LGBT behavior by illustrating the silencing effect of bullying and harassment on LGBT students and those perceived to be LGBT."
First of all, I'm not sure that I believe this protest is "student-led" or even "student generated".  As with all social movements, you can usually find an instigator behind the scenes that is pulling the strings and pushing an agenda. In this case, as reported by Linda Harvey on Barbwire.com, The Day of Silence is meant to be "a day when students remain silent in sympathy for those who are born homosexual or born in the wrong sex body, who are victimized (so the narrative goes) by any message encouraging actual male/female biology, dating and marriage -- all scorned as hateful and homophobic."
So, our children are being subjected to guilt and intimidation under the guise of an anti-bullying campaign, when in reality, it looks an awful lot like promotion of the homosexual and transgender lifestyle in our public schools.  Listen to the testimony of another writer at Barbwire, Linda Wall:  "It was several years after I was set free from homosexuality that I discovered the pushers of sexual perversion had made it into the public schools under the disguise of “diversity”. Imagine how horrified I was in 2000 to see that AT&T had sent pro-homosexual lesson plans to every middle school of America! These lesson plans presented the politically correct view of homosexuality."
And as the title of my post indicates, this political correctness has crossed the line into indoctrination.  Ms. Harvey goes so far as to write, "The 'anti-bullying' scam is the cover used in many school districts to expose children to obscene, bigoted and pornographic presentations. If we object, it is alleged that more students may attempt suicide."  Students and teachers in Iowa have reported workshops filled with profanity; details about oral/anal sex; how gender-confused girls can bind their breasts and sew fake testicles into their underwear as pretend boys; and even a recommendation for reacting to a pro-marriage bumper sticker: “Slash the tires.” 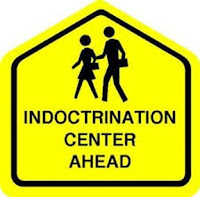 This event (which may be happening at your child's or grandchildren's school) is just the latest in homosexual activism.  By pointing this out, I'm sure that I will be labeled homophobic and a hater, but that is simply not the truth.  I have gay friends whom I love, and whom I know are every bit a child of God as I am. Would I rather they were living within the will of God?  You bet!  But I do not hate them, nor do I condemn them.  That is not my purpose on this earth.  But when I see gay activists who ridicule the dignity, innocence and modesty of children, while deliberately trying to coerce immoral behavior, then I will decry such actions -- no matter who or what they are promoting.
In her article, Harvey goes on to report that our middle school kids are being taught CSE, “comprehensive sex education,” and how to put both male and female condoms on plastic models in mixed sex classes (female condoms are most often used by lesbians). It’s humiliating for 11- to 14- year-olds, and just another of the Saul Alinsky tactics designed to shock and assault innocence.
Furthermore, these CSE classes are distorting the truth.  They teach that abstinence and protected sex are the same thing.  A program called Making Proud Choices, teaches that "To protect yourself and your partner from sexually transmitted diseases, including HIV infection, you should: Keep a supply of condoms on hand. Get used to condoms, so they are natural and fun. …” (p.92).
While this indoctrination seems to be happening quickly and without opposition, I do want you to know that the ACLU has issued a statement emphasizing the limits of political activism during instructional class time: "You DO have a right to participate in Day of Silence and other expressions of your opinion at a public school during non-instructional time: the breaks between classes, before and after the school day, lunchtime, and any other free times during your day ... You do NOT have a right to remain silent during class time if a teacher asks you to speak."
So, parents who are awake and aware of the cultural marxism/political correctness agenda being rammed down the throats of our kids in the public school system are being encouraged to call their kids out of school on April 15th.  They are being encouraged to stop the hijacking of our kids' education, and to actively oppose GLSEN's socio-political goals and its controversial, unproven, and destructive theories on the nature and morality of homosexuality.  The public school classroom should not be an arena for politicization of any kind of movement; especially for the mental, emotional, physical, spiritual, and sexual exploitation of our children. 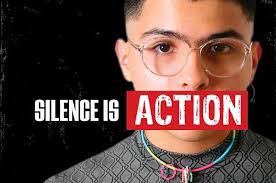 But one more word of caution ... lest you think the ACLU is on the side of families of faith, and the traditional sexual roles in society, be on your guard.  There is a paper called Schools In Transition: A Guide for Supporting Transgender Students in K-12 Schools, which is a first-of-its-kind publication for school administrations, teachers, and parents about how to provide safe and supportive environments for all transgender students, kindergarten through twelfth grade.  It was written by staffers from the ACLU, National Center for Lesbian Rights (NCLR), Gender Spectrum, the National Education Association (NEA), and the Human Rights Campaign (HRC).
With statement's like "A student’s age and maturity — or that of their peers —should never be a basis for denying a transgender student an opportunity to transition in a safe and supportive environment", it is not too hard to see that transitioning away from Biblical gender roles is not only supported, but subtly encouraged; and gender confusion is seen as viable in children as young as kindergarten!  What has this culture become?!?!
This post has barely scratched the surface as far as the assault on our children and their education systems.  And sadly, I would surmise that very few parents are aware of the indoctrination of their children.  I can't help but feel that this is one more nail in the coffin of our nation.  We have legitimized child sacrifice through abortion, destroyed the Biblical model of family and creation; and are now subjecting our children to perversion and deviancy.  How much longer will our righteous and holy God restrain His wrath?

Matthew 18:6    "But whoever causes one of these little ones who believe in me to sin, it would be better for him to have a great millstone fastened around his neck and to be drowned in the depth of the sea."