"A Wind In The House of Islam"

Admittedly, these are frightening times in which we live.  The world seems on fire with hatred and persecution; and ISIS openly warns "the nations of the Cross" in Europe that "either you join Islam, or pay tribute, or freeze the war.  If it was Paris yesterday... tomorrow it will be London, or Berlin, or Rome."  A recent video montage showed the attacks on New York City, Paris, and Brussels; and boasted of the bloodshed in Brussels.  It would appear that the news in regard to the followers of Islam is growing darker and more hopeless. 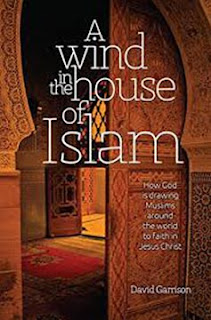 But that is not the news that Missionary David Garrison brings to us in his astounding book, "A Wind In The House of Islam".   This is not a new book -- it was published in 2014, I believe, but the book is the result of 2 1/2 years of research and involved Dr. Garrison traveling more than 250,000 miles to conduct interviews with more than 1,000 people around the Muslim world.  In his book, he declares that, "we are living in the midst of the greatest turning of Muslims to Christ in history."  In total he found 69 movements that had started in the first 12 years of the 21st century, in comparison with virtually no voluntary movements of converts to Christianity in the first 12 centuries of Islam.”
During his extensive travels around the world, Dr. Garrison wanted to know what it was about Jesus Christ that moved Muslims to faith in Him.  So he traveled throughout the Muslim world -- from West Africa to Indonesia -- collecting hundreds of interviews and personal stories of former Muslims from within these movements who have placed their faith in Jesus Christ. Garrison wanted to understand, "Why now?" "How is God at work in our day to see more Muslim movements to Christ than at any time in history?"
What he found was that something is happening in the Muslim world, something unprecedented in history... something that should give us all hope.  Dr. Garrison set out on an amazing spiritual journey, tracing the work of the Holy Spirit as it blows through the nine rooms in the House of Islam. And, in case you are like me, and are familiar with the terminology of the "nine rooms" of Islam, it is explained as follows ... The House of Islam can be divided geoculturally into nine distinct regions or "Rooms".  These "nine rooms" are:  1) West Africa; 2) North Africa; 3) Eastern Africa; 4) the Arab world; 5) the Persian world; 6) Turkestan; 7) Western South Asia; 8) Eastern South Asia; and 9) Indo-Malaysia.
When he began his 2 1/2 year journey and research, Dr. Garrison said he started out with a "healthy scepticism" about the number of new believers among the Muslim population, imagining that the figures might have been over-estimated. Instead, he found that numbers were often vastly under-reported.  "What is exciting is not just how big the movements are ... but how many of these movements there are now, and that they're not limited to one corner of the world, but we're seeing them from West Africa to Indonesia, and virtually everywhere in between," he says.
So why is this turning to Christ happening now? "God has brought several elements together uniquely in our time," he says. "Some of them are old elements – Muslim violence is not new, – but what's different is today when Muslims experience this violence, they can see an alternative... they can switch on their Internet, they can turn on their television and hear an evangelist speaking Farsi or Kazakh or Uzbek."
All I can think of at the moment is, what Satan meant for evil --with pornography, jihadist recruitment, distraction away from God -- our Father can use for His good.  As proof of this, Dr. Garrison points out that it's also the combination of Bible translation, alongside the potential for multimedia evangelism, and the growth of international travel that appears to have facilitated this change. "It's a great day that God seems to be orchestrating for this [conversion] to happen."
And there is no reason to doubt that these conversions are still happening, despite the increase in violence by ISIS and other jihadist groups.  After all, Satan knows his time is short and we all know that he is going to be pouring on the steam to destroy as many lives as he can before our Lord comes in His righteousness and dispenses His wrath against the ungodly.
It may be hard to come to terms with what I'm about to say .... we are living in terrifying times of suicide bombers and massive attacks upon the West ... but these are the days of salvation for Muslims! We must pray for what God wants, which is that no man be eternally lost.  And we have to face it, for much of the last 13 centuries, Christians in the West have been "failing" to bring Muslims to Christ and instead losing many Christians to Islam. Although "the tide is turning", Dr. Garrison points out that it's happening "over there".  Another challenge for the Western Church, therefore, is to be a part of this change, both locally and globally – through reaching out to Muslim neighbours, and being prepared to take the gospel to unreached communities abroad.
It is both heartening (and personally frightening), but I have a young college-aged friend who is planning a trip to Brussels this summer as part of a Christian outreach program.  She is young, blond, and obviously American; but she is also bold in her faith and willing to take the gospel into that hostile territory.  She knows that fear is not our birth right as followers of Christ.  She knows that Christ is all about taking what man intends for evil and turning it to good.  So I will be covering her in prayer with the blood of Jesus and praying that she does mighty works in His name. 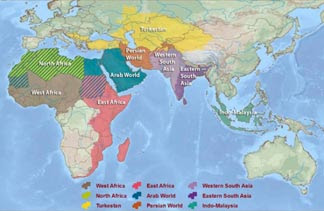 I can do that because I believe that our God can work in the midst of the rampage and violence that is engulfing Europe today, just as Dr. Garrison found Him working in the nine rooms of Islam.  Consider this:  West Africa and Eastern Africa are filled with Muslims from largely animistic tribal backgrounds. The Arab world, where Islam originated, was previously Christian and home to many of Christianity’s earliest Church Fathers. The Persian world was predominantly Zoroastrian before its seventh-century conquest by Islamic armies. Central Asian Turkestan was the home of shamanistic Turko-Mongolian tribes with scattered communities of Nestorian Christians before Tamerlane and the Golden Horde eradicated them in the 14th–16th centuries. These same Turkic conquerors subdued the peoples of what is today Afghanistan, Pakistan and western India in the centuries that followed. Islam’s advance eastward toppled Hindu and Buddhist kingdoms in what is today eastern India, Bangladesh and western Myanmar.  By the 13th century, Islam had already gained a foothold in the Indonesia archipelago, gradually converting the Hindu spiritualism of what is today Malaysia and the largest Muslim country, Indonesia.
YET, even with this seemingly strong footprint among the nine houses of Islam, God's presence is growing and He is shining His light into this darkness.  There IS a "Wind" in the House of Islam, and it is God's Holy Spirit!  There is a supernatural spirit sweeping through the darkness in this world, and the response to Him is shining light into that darkness.  We must not become discouraged, disheartened, or dispirited.  And this is how one Muslim woman explained why she has not fled from the violence that is ISIS:  "When God wanted to reach men, He became a man. If God had wanted to reach hyenas, He would have become a hyena. If we want to reach our own people, we've got to stay in our community to reach them."  May God's mercy and the power of the Holy Spirit shatter the darkness that the Enemy is spreading.  And may His Truth destroy every evil intent of our Adversary!

Isaiah 9:2    "The people who walked in darkness have seen a great light; those who dwelt in a land of deep darkness, on them has light shined."