What Is The True Goal Of Multiculturalism?

I think we can all agree that at the heart of national and world events is the issue of multiculturalism.  The official definition of multiculturalism is "the co-existence of diverse cultures, where culture includes racial, religious, or cultural groups and is manifested in customary behaviours, cultural assumptions and values, patterns of thinking, and communicative styles."
The last few decades has seen it become a major political issue, both here in the U.S. and Europe.  The fact is that the world is unraveling; you can see it in the Middle East, in South America, and in Africa, for instance.  Peoples of different ethnicities and races; different religious beliefs; and different social values are clashing in countries where the politically correct politicians are forcing their social agenda views.  The true results of multiculturalism are hidden behind utopian rhetoric that promotes equality and justice and a homogenous society; one in which everyone is seen as identical, similar, and comparable.  Why can't the world see that this can never be!
Oh, I know, there will be those who say America has always been "the melting pot" of the world; that we are a nation made up of immigrants.  That is true, but there is a major difference between our policies of yesteryear and those of today.  In the past, other cultures were assimilated into ours.  They were not heralded and protected, or labeled as mistreated and abused.  There were no terms like "Irishphobic" or "Italianphobic".  Every nationality that came to America arrived on our shores because they wanted what we had ... the freedom to become all they wanted to be.  And they were willing to become like us; to adopt our values, our standards, and our behavior.  Their faith was a matter of their own conscience, and it served to reinforce the principles of freedom and liberty for the individual -- the backbone of our national existence. 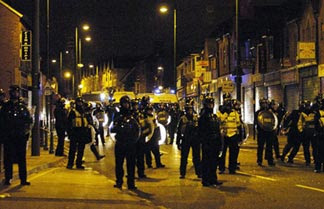 But that idea of assimilation is no longer applauded.  Today, entire countries are being overrun by huge populations of immigrants, and it is the native citizens that are expected to adapt and capitulate their rights to accommodate the migrants.  Understandably, there is going to be conflict.  And I would suggest that this is really the ultimate goal of multiculturalism; both here and in Europe.
Can you concede that behind this massive push to open up the floodgates to migrants from the world's trouble spots is a political ideology that wishes to destroy the basis of Western civilization? Are you able to see the puppet masters who are hard at work to dismantle capitalism and free enterprise, and who wish to institute collectivism and communal property?  Can you accept that this chaos and conflict are all about Power?
As it was so deftly worded on the website, Gothamresistance.com, "Turning Americans into a minority in their own country is the only way to control these pesky, greedy, racist people who are so obsessed with freedom and prosperity."  We're already seeing it happen in Europe.  Entire communities in France and Germany are controlled by Muslim immigrants who refuse to assimilate, and who are outright antagonistic towards Western behavior and values.  Furthermore, this particular population is increasing rapidly (especially with recent policy), and they are younger and angrier than their fellow citizens.
Both British Prime Minister David Cameron and German Chancellor Angela Merkel have both publicly admitted that "multiculturalism has failed".  Well, duh!  As Chuck Coulson explained in a 2011 article at The Christian Post, "The underlying reason for this is that culture reflects beliefs of the people. In fact, cultures are formed by those beliefs. For a society to survive it has to have one culture -- a culture that enjoys the participation and contributions of all of its peoples."  But that implies a willingness to cooperate and compromise.  What about sharia law suggests that this is even a remote possibility?
And I must agree with the sentiments of Walter E. Williams, an economist, commentator, and the Distinguished Professor of Economics at George Mason University.  Mr. Williams said, "At the very heart of multiculturalism is an attack on Christianity... and also on free market capitalism.  [This is because] Christian nations, which have a great measure of economic liberty, have been at the forefront of the struggle for personal liberty and private property rights for centuries. Personal liberty and private property are anathemas to people who want to control our lives. That is part and parcel of the multicultural and diversity movements infecting the Western world." 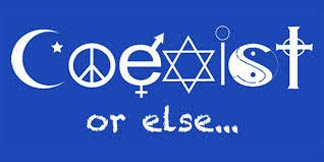 Just listen to the words and look at the actions of the immigrants that come to the West.  Do you see any evidence that they will ever agree with our basic tenets of freedom, whether religious or social?  Just their attitudes about the rights of women should tell you something.  And targeting Christians for torture and death clearly speaks of their hatred for any religion not their own.  That has never been the way of the West!
I found this observation by Melvin Rhodes at Beyond Today quite compelling:  "There's an interesting verse in the New Testament of your Bible that stands in direct contradiction to the multicultural idea. While “God shows no partiality” (Acts 10:34), we read in the same book that “He has made from one blood every nation of men to dwell on all the face of the earth, and has determined their pre-appointed times and the boundaries of their dwellings (Acts 17:26)."
He goes on .... "It is also interesting to note that Jesus Christ, when asked, “What will be the sign of Your coming and of the end of the age?” (Matthew 24:3), warned that “nation will rise against nation, and kingdom against kingdom” (verse 7). A kingdom is a political entity. But the word “nation” here is translated from the Greek word ethnos, from which we get the words ethnic and ethnicity. In other words, Jesus was saying that immediately prior to His coming to establish God's Kingdom on this earth, there would be a time of great ethnic conflict—the inevitable result of mingling diverse people groups together."  There's no doubt that this is what we're seeing today!
Here is what the Politicians and the Elite will never realize ... the only way for the world to truly live in harmony is to come to the One who died to make all of us His own.  And that is the battle that we see unfolding right now.  This conflict is going to continue until every person on earth has made their choice.  I believe the terror attacks and social upheaval are the beginning of the birth pangs that will force the nations to choose who they will follow.  We cannot remain on the sidelines, nor can we compromise to try to win their allegiance.  It is time to face the music ... not only has multiculturalism failed, but it is ushering in the final showdown and the world's day of reckoning.  Are you ready?

Psalm 117:1-2    "Praise the Lord, all nations! Extol him, all peoples! For great is His steadfast love toward us, and the faithfulness of the Lord endures forever. Praise the Lord!"

Email ThisBlogThis!Share to TwitterShare to FacebookShare to Pinterest
Labels: Multiculturalism