A Reason To Weep

Around the world yesterday, millions of Christians celebrated the resurrection of Jesus Christ.  That is the point of this blog post ... not to engage in a conversation whether "Easter" is named after a pagan goddess; or the relevance of Passover to the death, burial, and resurrection of our Lord --- although both are topics I am passionate about.  No, today I am reminded that if not for the hope that lies in Jesus's Resurrection, I would feel despair and defeat.
Once again, the Adversary of Christ influenced a suicide bomber in Pakistan.  At least 65 people were killed, and over 300 were wounded.  Most of the victims were Christian women and children who had gone to a park to celebrate Easter weekend.  And that was the point ... they were deliberately targeted because they were Christian ... and because it was Easter.
You see, there is a very real antichrist spirit that is preparing the way for the Man of Lawlessness, which will make it easier for him to control the entire world in that short 7-year period called the Tribulation.  And the Enemy knows how it all turns out.  So it is in his best interest to engender hate among as many of the world's population as he can before his time runs out.  Those whom he can capture in his web of deception and lies will not inherit the eternal salvation that lies in faith in Jesus. So he celebrates victories like those in Pakistan; when he can convince a man that killing innocent children is justified and commanded by his god.  Each person he can convince to hate is one more that he can keep from running to Jesus. 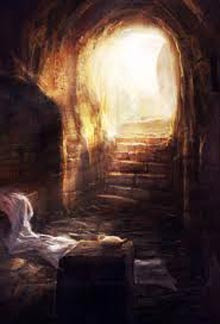 But he doesn't win them all!  Asad Shah was a 40-year-old Muslim shopkeeper in Glasgow Scotland.  Known for his compassionate nature and hope for tolerance among the world's religions, Shah was killed by a fellow Muslim for wishing Christians a "Happy Easter" on his Facebook page.  Last Thursday evening, he posted "Upcoming Special Event:  GOOD FRIDAY AND VERY HAPPY EASTER; ESPECIALLY TO MY BELOVED CHRISTIAN NATION (in the name of Allah) ... Let's follow the real footstep of Beloved Holy JESUS CHRIST (Peace Be Upon Him) and get the real success in both worlds."  Hours later he was stabbed in the head, and he was stomped to death.  While it might be easy to view this as a win for the bad guys, the spiritual realm cannot deny that Hate was jealous of the Love that Shah showed his fellow man.
Yes, Asad Shah was a Muslim and he does not worship the One True God.  But it is unmistakable that his life has glorified Jesus and the Love that sacrificed Himself for the world's sins.  While the officials are willing to call his death a "religiously prejudiced" attack, we know it is more than that.  It is part of the cosmic battle for the souls and spirits of men.  The battle is coming into sharper focus, and the sides are being clearly drawn.  What better day than Easter to strike a blow against the Hope of mankind?
But the attacks and strikes against Jesus aren't always so blatantly violent and savage.  Sometimes they are subtle and involve distraction and diversion; minimizing and diminishing God's Truth.  That was apparent when, as The Blaze wrote, a Fox News reporter took to the streets of New York to ask pedestrians about the holiday on Sunday, and its significance.   Answers ranged from Memorial Day to Passover to Father's Day.  One woman said Easter celebrated when Jesus Christ was born. Another said she’s “honestly not really sure.” And yet another responded with “the beginning of a new mom opening the womb.” Not really sure what that last comment was all about.
Sadly, many people did not know that Easter celebrated Jesus's resurrection, nor where that event took place.  And the report did not elaborate, but I would not be surprised if many did not know the significance or implications of His death on the cross.  And that is reason to weep.  It is tragic that people are dying in the streets because they want to celebrate the resurrection of the risen Lord.  But I think it is even more devastating when the world is dying from a lack of knowledge of Him.  And that is becoming as effective a tool for the Enemy as a suicide bomber.
When the world no longer knows that there is a God who loved them so much that He sacrificed His Son, or that a Savior came to sanctify and justify them before the God of the Universe, then all Hope will be lost and Death will rule the day.   There is far too much evidence that the Enemy is making his final moves.  While I weep for his temporary victories, I know my tears will soon be dried and there will be no more death or mourning or crying or pain; for the the devil's order of things will have passed away.  And that's reason to celebrate, indeed!

Romans 5:8    "But God proves His own love for us in that while we were still sinners, Christ died for us!"