I remember what it was like ... to be young and idealistic and wanting my generation to make a difference in American politics.  And I would submit to you that every generation since our Founding has felt the same way.  When we're young, we all think that we can do it better than the previous generation, and in this current political season, we see the Millennials taking their stand and hoping to make a significant impact on the future.
So that we are all in agreement, Millennials are generally defined as being between the ages of 18 and 35.  For this discussion, I want to concentrate on the younger end of that spectrum; particularly those who think that Bernie Sanders is the answer to what ails this nation.
Remember that Senator Sanders is the only candidate for President calling for a "political revolution". (I guess "Hope and Change" was too mild a cause for him).  The youth in college are well aware of the debilitating debt that will be waiting for them at the end of their matriculation, in the form of astronomical college loans.  And those who have been in the workforce for awhile are barely making it from paycheck to paycheck.  It's natural that they would cleave to a candidate that promised them he will lift the burden off their backs. 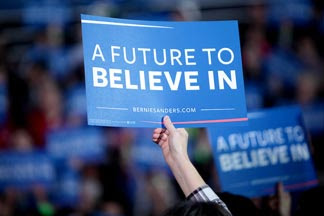 I mean, who wouldn't want free public colleges and universities?  Medicare for all?  Improvements to our infrastructure?  Three months of paid family leave on the birth of a child?  And a $15 minimum wage?  But here's the thing ... It's simply not practical!  What's more, all those benefits are going to cost money!  How do these young people think a President Sanders would pay for all these government programs?  We all know that money doesn't grow on trees, right?  The only answer is that government becomes our provider, and logic tells us that bigger government providing more services will cost more to run; and how does Sanders propose these services will be paid for?
Well, he says that the free public education will be paid for with a “financial transaction tax” of only a fraction-of-a-percent on "speculative investments", or those investments with a high degree of risk.  Does that make sense to you?  Does that sound like it would be a big revenue maker?  I'm sure he somehow equates it to "taxing the rich", which would strike a chord with every millennial who has ever taken an economics class from a liberal professor.
As far as the Medicare-for-all promise, this would be paid for with progressive income tax increases, mostly at upper levels.  (Another "taxing the rich" plan).  Elimination of premiums and co-pays would result in a savings of approximately $5,000 per family.  Again, where will all that money come from to support such a program?
Bernie says that improving our infrastructure will be largely funded by requiring corporations to pay taxes they already owe, but have deferred.  And he mistakenly thinks this will create millions of jobs, driving up wages across the economy.  He obviously has never run a business! And his paid family leave benefit would ostensibly be paid for with a $1.61 weekly tax withholding from every worker's paycheck.  At least that's how I understand it.  So, does that mean every American worker would be subsidizing all new parents, with the distinct possibility that they would never take advantage of the benefit themselves?  Isn't that collectivism?  And, as with all of Bernie's plans, this one doesn't seem to be too carefully thought out.
This is evident in his promise of a $15 minimum wage, which he says will enable people working full-time to escape poverty, reduce reliance on public assistance programs, and boost local economies as people have more income to spend.  Think about it, Bernie!  By "taxing the rich" to pay for all your social programs, infrastructure and higher minimum wages, have you ever thought that there aren't enough rich people to pay for all your promises?  Or have you thought about the fact that many of those businesses that will be taxed are small to medium businesses and simply can't absorb the extra tax burden?  Or that the minimum wage jobs will likely disappear because the cost of doing business will be too high to keep the doors of the local burger joint open; or that hospitals and nursing homes will have to lay off those minimum wage workers to continue to provide services; or that small businesses that deal in manual labor, like auto mechanic shops, or farms will be unable to hire as many workers.
If the people Bernie Sanders intends to tax to pay for these entitlement programs cannot afford to stay in business, doesn't that mean more people out of work, more on public assistance programs, and less money being spent in local economies -- exactly the opposite of what he is promising?
So, Millennials, please take a piece of my advice, and face reality.  You are not the only group of young voters who have been infused with youthful idealism and swayed by the promise of utopia.  Like those who came before you and followed the visions of Eugene McCarthy, George McGovern, and Ronald Reagan, you recognize that America needs to take a different path than the one we've been on.  And right now, you're thinking that means the dissolution of capitalism and a drastic move towards socialism.
But here's what you need to grasp:  Really, it's as simple as Economics 101.  THERE IS NO MONEY!  You will be paying for these programs yourselves in the form of higher taxes, and the services will be of less value! We don't have a balanced budget, and we can't keep spiraling into debt!  This new world order and global world economy that is being touted in your universities will not bear under the weight of the crushing debt that Bernie Sanders and a Socialist United States will bring to your future.  I hate to burst your bubble, but nothing is free.  And all the cost of these programs will be set squarely on your shoulders.
As a nation, we all need to come to the realization that we've been spoiled.  And it's time we tell ourselves what our parents and our government haven't done for a very long time ... "We can't afford it."

2 Thessalonians 3:7-8    "For you yourselves know how you must imitate us: We were not irresponsible among you; we did not eat anyone’s food free of charge; instead, we labored and struggled, working night and day, so that we would not be a burden to any of you."