You Wouldn't Believe It If I Told You!

But guess what?  I'm going to tell you anyway.  Rather, one of my faithful readers is going to tell you in her own words.  Because Christians and non-believers, alike, need to know the truth of what is blatantly happening in and around the world.
God is revealing to those who are called by Him, that there is a very real war taking place against His people, and Satan's servants in the spiritual realm are becoming more and more visible in their attacks.  Yes, I'm talking about demons and dark entities; those spiritual forces of wickedness that Paul talks about in Ephesians, Chapter 6.  Those powers that he says are fighting us from the spiritual realm.  But they are not only attacking us from the spirit world, they are now becoming bolder and manifesting here, in the physical world.
I personally know of several instances of people I am close to who have encountered such entities and were willing to talk about it.  I think it would amaze you to know the number of Christians who have been physically attacked and are too afraid to admit it.  How do you explain to the Western Church that you have experienced something they don't even admit exists?
Well that isn't a problem in the rest of the world, and I am always glad to hear from readers who want to share the power of Christ in dealing with such dark forces from the Enemy.  So, in the hopes that others will "come out of the closet", so to speak, I want to introduce you to the personal experiences of one faithful Christian woman who wants to glorify God in her testimony.  Here is her story.... 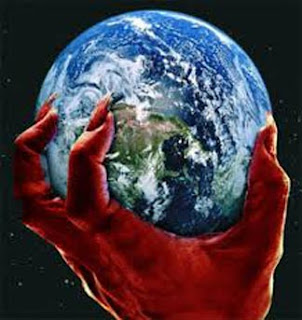 I was raised in Burkina Faso, West Africa … my folks were missionaries. It is naïve [for Christians] to believe that there is more Satanic oppression and possession going on in Africa than there is here in America … but one big difference is that in Africa, it is MUCH more recognized.  And it can’t be dealt with until it IS recognized!  Africans see the truth that we are spiritual beings who happen to have a temporary body; while here in America, even most Christians don’t recognize that we are primarily spiritual beings.  Here in America, Satan and his demons are dressed up and masquerade behind suits and “cultured-ness”… but are every bit as dangerous.
When my folks and I went back to Burkina Faso in 2001 (my first time back home since I left at 15 years old in 1965!), I’ll never forget driving back one night from one of the bush stations we visited, where Daddy, some 55 years before, had evangelized the village, then established a pastor and built a church.  Our driver was conversing with another pastor who was with us in the vehicle, telling about how one time while returning home on his bike from a service he held in that village, he saw spirits appearing as lights, jumping from tree to tree above him, no doubt trying to scare and dissuade him from allowing God to use him in the lives of those villagers.  It was stated so naturally and calmly, as though they were discussing the weather.
There are so many stories like that!  One time late at night on our way home from a bush service, my mother saw a half-human, half-lion “creature” (read: demon) run across the road in front of the car, in the process of changing shape.  You would have to know my mother to know the kind of solid character, depth of her walk with the Lord, and uncompromising life, to understand how if she said she saw it, she truly DID see it.  I’m sure it too was for the purpose of scaring them from carrying out their ministry.
One of our Bible school students was the son of a witchdoctor.  He was sharing with us one evening how someone from his village had been murdered, but they didn’t know who the killer was.  They were in a procession, in the process of taking the body for burial when,  following some kind of incantation by the witchdoctor wanting to discover the identity of the killer, the “body” on the bier sat up and pointed to his killer, then fell back down dead again … and the procession continued to the burial site!  (This shows that even the dark side has tremendous power!)
Another time, in an effort to force a girl who was a new Christian to recant her faith and make her willing to marry a non-believer chosen for her, a witchdoctor sat her on a stool in the middle of a hut, on the floor of which were three baskets.  He opened up one of the baskets and let out a venomous snake—which instead of biting the girl, slithered in a circle around her, then went back into its basket.  The witchdoctor opened the second and then the third baskets and each time those snakes too did the same thing—crawled around her without touching her and then went back into their baskets.  The witchdoctor declared there was a power at work greater than his, and said there was nothing else he could do to force the girl to recant.  (She went on to marry one of the Bible school students!)
Another time a demonic-controlled woman was prayed for by one of the bush village pastors, and she was immediately restored to sanity.  But until she grew stronger in her faith, she stayed living with the pastor and his wife in the walled-in living area of their huts.  As long as she was in the enclosure she was safe.  But if she went out alone to go to the bathroom, she would return all beat up from demons having attacked her.  However, if the pastor’s wife accompanied her as she went outside the enclosure to go to the bathroom, nothing happened to her!
Then there was the day another insane (demonic-controlled) woman who lived out in the fields and had little contact with her family except to get food from them, had a dream that one day she would see four white people come to the village, and that when she saw them, she was to go to them and she would become whole.  Not too long after that, my parents visited that bush village, but the lady didn’t come to them as she saw only two white people.  (And most of those living in the bush had never before seen any white people!)  Some time following that, my brother and I went with my folks to that village.  She saw the four of us, came up to my parents and the pastor, was prayed for and beautifully delivered.  The Lord gave her such a gift of song and understanding of Scripture that in spite of her previous condition, she was immediately, and mightily, used in teaching gospel truths to the villagers!
Christians need to WAKE UP and recognize the evil lurking behind the façades Satan has erected—evil they’ve invited into their homes, families and lives through TV shows, movies, books, music, etc. If they don’t make becoming strong in their spirits a priority in their lives, there’s no way they’ll be able to stand against what is ahead of us!

Please don't think that this is something unique and peculiar to Africa; that somehow they are a nation that is inherently wicked or open to such attacks.  I would venture that some of the most righteous and genuine believers exist among those who have simple and more difficult lives.  They NEED Jesus more than we comfortable Westerners do, and they recognize His presence and power in their lives much easier than we do.  And they also experience the Enemy and his wicked servants, and are not afraid to expose the practices and means by which they openly and boldly attack those who profess a faith in Jesus.
So, if you haven't experienced such an attack yet, I believe that it will become more common among all Believers as we advance toward the final showdown between Yeshua and Satan.  Our kids are messing with the spiritual realm; we invite spiritual wickedness in when we entertain mystical religions and other gods; and our culture is actually paying homage to pagan rites, rituals, and entities through our entertainment industry and a false façade of "enlightened" humanism.  Make no mistake!  The Enemy will take advantage of these opportunities we open ourselves up to!  If God is not our priority, and not the One upon whom we are focused, then He will be replaced with the one who will lead us to destruction.  What this reader disclosed in her personal testimony is not limited to the "dark continent of Africa".  I assure you of that!  BE AWARE and guard your life against the growing forces of evil.  The prince of this world is gathering his forces, but we serve the Holy King of Righteousness.  We will win this battle!

Jude 1:13    "...  wild waves of the sea, casting up the foam of their own shame; wandering stars, for whom the gloom of utter darkness has been reserved forever."