When The Truth Becomes Illegal

Do you want proof that the world is topsy turvy?  That everything is turned upside down; right is wrong, and wrong is right?  Just take a look at the decision a grand jury in Houston made when it indicted two journalists who exposed Planned Parenthood's alleged policies of selling aborted babies' body parts.
Robert Knight of BarbWire.com reports that a felony charge of tampering with a government record was filed against Center for Medical Progress(CMP) founder David Daleiden and CMP employee Sandra Merritt.  Both Daleiden and Merritt made a series of undercover videos in which PP officials allegedly discussed prices and techniques for harvesting aborted fetuses for profit.  Mr. Daleiden also was charged with soliciting the purchase of human organs – as if he really intended to buy them.  Where is the common sense of these grand jurors? 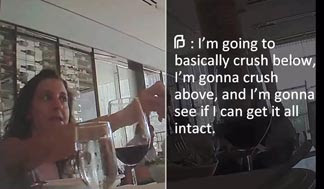 Here's where things got completely turned around:  The grand jury was initially formed to decide whether a Houston Planned Parenthood clinic was illegally selling unborn babies’ body parts. Instead, the jury ended up indicting the people who tried to reveal the illegal actions.
I thought the BarbWire article presented an intelligent and clever analogy ... By the grand jury’s reasoning, undercover police officers trying to bust drug dealers should be prosecuted for trying to buy drugs.  Or how about this? Undercover reporters who get the goods on perps should be hauled in and charged with what the perps are doing.
But here's the deal ... It’s a federal felony to profit from the sale of fetal body parts.  Yet the Houston clinic gets off scott free!  Not even a slap on the wrist!  And we cannot ignore the great lengths to which Planned Parenthood went to create doubt about the videos; specifically, declaring that they had been heavily edited with "cuts, skips, missing tape, and changes in camera angle."
For anyone who has ever uploaded a video to YouTube, or sent one to friends or family, you know that it is not uncommon to edit the video to eliminate irrelevant material, or to stop and start a camera, or to change camera angles.  I have personally created videos for our business and webpage, and have employed all these techniques... nothing unusual about these characteristics of the CMP videos.
Just as the writer at BarbWire points out, "[They] simply cannot get around the fact that segments of intact dialogue reveal PP representatives calmly discussing body part prices.  There is no defensible context, nor did they edit out any clips of them later saying, Just kidding."  I agree!  Under what rationale is it OK for multiple PP officials and reps to describe the "crunching" of skulls and the description of fetuses as "It's a boy!", as they offer their pricing structure?
The only bit of good news that came out of this circus is that Texas lawmakers are studying new laws on fetal tissue donation, and the Texas Health and Human Services Commission said it will drop Planned Parenthood from the Medicaid program.  I guess we will have to see if that decision comes under fire, as well.  I half expect the Feds to try to override state's rights in this matter.
But I suppose that the miscarriage of justice carried out in Houston should not surprise us.  The Bible tells us that "Though they know God's decree that those who practice such things deserve to die, they not only do them but give approval to those who practice them (Romans 1:32)".  They give approval to the evil-doers and persecute the righteous.  Is that what our society has come to?  If so, then we deserve every ounce of judgment that is coming from on high... and believe me, it is coming!