Where Is Common Sense When It Comes To Expressing Our Faith?

Just a random glance at headlines across the country will reveal the battle we are in to protect our faith.  Presidential candidate Ben Carson was approached by a proclaimed atheist voter prior to the Iowa caucuses.  Carson was asked if he agreed with other candidates whose positions state that Biblical law trumps Constitutional law.
First of all, that is a loaded question; especially because it is easy for misinterpretation.  To me, the term "Biblical law", rather than "God's law", leaves one open for charges of intolerance and injustice, if not properly explained... God's laws are the commandments that He makes perfectly clear are His alone.  Biblical law could refer to all the addendum's that the nation of Israel has declared since its inception; a disproportionate number of which were instituted because they were under an awesome obligation to maintain their covenant relationship, and they wrongly attempted to merit His favor and blessing by adding their own restrictions to His laws.  But I'm getting off-track...
I would assume that the questioner had in mind such laws like the one the Supreme Court recently mandated in which same-sex marriage is now constitutionally protected, in opposition to God's law that marriage is between a man and a woman.  I believe that Ben Carson's answer was right on the money: "Our Constitution, which is the supreme law of our land, was designed by men of faith, and it has a Judeo-Christian foundation... If we create laws that are contrary to the Judeo-Christian values that we have, then I think we should fight against those kinds of laws."  Carson went on to make his position perfectly clear: "I personally believe that we still have an obligation to obey the laws whether we agree with them or not. Otherwise, we would be a lawless nation.  But that doesn’t mean we shouldn’t fight against anything we see as unjust."  (I would have added, "or unrighteous").
In a slightly abbreviated version, I think he's saying that our elected officials must abide by the laws of the land.  But when confronted with a man-made law that goes against God's commandments, then we all have a duty to fight to change those laws to align with God.  Clearly, those who do not believe in God or His sovereignty over human affairs will seek to change laws to appease the flesh.  At least we still have men in the public arena who seek to obey and please God. 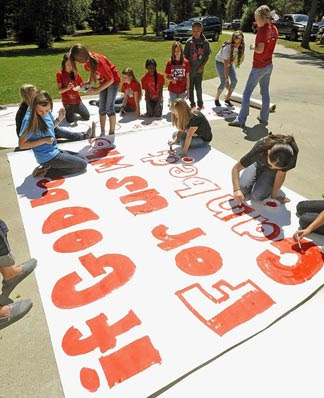 And there is still some God-given common sense in the Texas State Supreme Court as well.  The Court ruled in favor of a group of middle and high school cheerleaders who displayed banners with religious messages on them at football games, citing the following as their reasons for deciding in favor of the cheerleaders:  "messages created solely by student cheerleaders do not become government speech simply because aspects of cheerleaders’ activities are regulated by the school,” the brief stated. “Because the messages on the banners are the cheerleaders’ messages, the content of which is not dictated by the school, the speech is not the school’s, and it does not qualify as ‘government speech.’ The speech belongs to the cheerleaders, and it is entitled to First Amendment Protection.”
What astounded me was that the School District, itself, -- which means at least one person -- objected to the use of Biblical Scripture or inferences on signs and banners held up by the cheerleaders to encourage team spirit.  In Texas, School Districts are run by School Boards, which if I'm not mistaken, should have the best interests of the students at heart.  But here's what is most upsetting to me ... a district court judge initially ruled that the cheerleaders had the right to display the banners at sporting events as they were “constitutionally permissible.” However, the school district appealed the ruling with the backing of the ACLU!  Additionally, the school district had decided to allow the banners but had the ability to censor them at will.
So, I ask you again, where is the common sense that says it's OK for a School Board to censor a student who wishes to encourage another student with a message from God?  Since when is a cheerleader, with a banner, a form of government-and-state-sponsored religion?  Has all common sense just gone out the window?
Well, I would suggest that it has in Phoenix, Arizona.  I say that because the City Council of Phoenix has given members of the local Satanic Temple permission to offer the opening prayer at an upcoming Council meeting.  While the satanists have voiced their intention to "do nothing offensive", stating that, "We’re citizens of this government, and we would like our voices to be heard.  If they don’t want to accept, constitutionally what must happen is that all voices must be taken down from the public forum. It’s basically all voices must be heard or none at all."
Now, those of us with common sense will immediately surmise that this is simply an argument that the Enemy of God is using to try to put satan on equal footing with the Most High God.  It not only makes a mockery of prayer in general, but is a blatant taunt in the face of those who have faith.  But here's the real paradox... the satanists explained their position as follows:  "Consistent with the U.S. Supreme Court’s direction, the city cannot dictate religious viewpoints or the content of a prayer.  In addition, government may not exclude a denomination or a religion from praying under these circumstances."
While they may say that they "don't believe in a literal Satan", but instead view the biblical Satan as "a metaphor for rebellion against tyranny", they have made it perfectly clear that they wish to participate by offering a prayer, which by definition, is "a solemn request for help or expression of thanks addressed to God or an object of worship."  They can deny they worship Satan all they want, but their actions and their words belie not only their mockery of us, but their deceit in order to achieve the devil's goal.
So, my post title asks where has the common sense gone as it applies to the expression of our faith.  Obviously, it is disappearing from within the unbelieving public; from within our court systems and educational boards; and from those who are appointed to govern our cities and communities.  Human values and selfish concerns have replaced sound judgment and the ability to consider matters from a discerning spirit.  It is quite apparent that forthcoming elections will have profound ramifications on our society, our culture, and our nation.  Whether it is for the office of President of the United States,  a District Judge, or School Board Members, you better know (before you vote) where they stand in regards to faith in the Sovereign God of the Universe... or we are going to see a vast change in how we are allowed to worship and obey Him.

Psalm 1:1-2   "Blessed is the man who walks not in the counsel of the wicked, nor stands in the way of sinners, nor sits in the seat of scoffers; but his delight is in the law of the Lord, and on His law he meditates day and night."