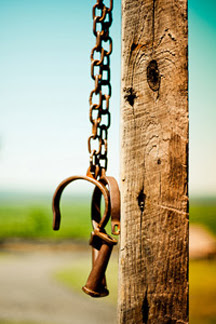 And in case you are thinking that only non-believers are in need of deliverance ... think again!  I absolutely believe that we Christians need to be rescued and set free as much as anyone!  How many of us know the joy of Jesus as our Savior, but are miserable in our lives?
Each of us have a past, and oh, how the devil likes to whisper his lies that this very past can never be fully erased from our memories, or the sight of our Lord.  Yes, we've heard through the Church that our sins have been washed by the blood of Jesus and we are as white as snow.  But how many of us still feel dirty, or suffer recurring doubt that we can ever be made truly clean?
How many have trouble believing that Jesus really delights in us?  How many would still feel guilt and shame if they stood before Him today?  Do you have trouble picturing Him hugging you and being proud that you belong to Him?  If any of these thoughts have ever crossed your mind, you are in need of healing those open sores and closing those wounds.
Both my husband and I are people who have a deep faith in the power of Jesus ... but we are also sinners and people who have pasts that we are not proud of.  Through our separate delivery sessions, we were able to identify those areas of our lives; particular events; and specific people who have contributed to feelings of inadequacy, guilt, anger and any number of burdensome feelings that prohibit a full relationship with God, and keep us from seeing ourselves as Jesus sees us.
We were able to forgive those who have trespassed against us, just as God forgives us for our trespasses.   In doing so, we were set free from satan's ability to use that unforgiveness against us, and to drive a wedge between us and the flow of God's joy, peace and love into our lives.  (See, there was a reason that Jesus instructed the Disciples to include that verse when they prayed).
We were able to picture Jesus present in every situation and to accept His forgiveness as we forgave others.  And perhaps most important of all, we were able to forgive ourselves.  And when all that "garbage" was released off our spirit, we could see ourselves lined up with God's purpose for us ; to be one with Jesus and the Father, just as They desire us to be.  Our memories were healed just as the spiritual wounds were healed;  and what once seemed dirty and dingy to us, now looked bright white and pristine as we saw the acceptance in Jesus's eyes.  We were not only healed, but restored; that which had been stolen from us by the Enemy had been repaired and returned.
Further blessing was released to us in the knowledge that whenever we sense that we are falling for the lies of the devil again -- because he won't just give up; he will try to fool us again because he knows exactly what worked the first time -- we now know how to counter his attacks and heal any new wounds (or the attempt to re-open old ones) with the Truth that has been revealed to us.  We know that Jesus wishes us to use the power of the Holy Spirit that has been deposited in each of us to surrender all our hurts and damage to Him.  When we can picture stuffing all that garbage into a box, handing it to Jesus, and watching Him burn it in the Holy Fire, there is a supernatural transformation that takes place in our spirit, and those memories are no longer painful; the wounds that were caused are healed and a scar has formed, closing that injury against harming us.  Remember, when you invite the Holy Spirit and Jesus to take part in this session, you can expect that they will go to work to set you free!
The greatest blessing that came from our sessions was that I saw my husband released from a spiritual wound that he had been burying, but which was festering for over 10 years.  He was able to forgive himself for believing a lie Satan told him; a lie that was designed to keep him from growing into the warrior he has become for God.  Satan failed, and didn't stop my husband's relationship with God and Jesus, but he had been beating himself up because the battle resulted in the death of one of his beloved dogs.  He was able to let Jesus take that guilt and shame and anger off his heart, mind, and spirit, and to become free, at last, of that heavy burden.  He can now speak of it as something in the past that was painful, and that Jesus has changed how he views it in the present.  And he was given an image and a thought that shows him how that event will be restored by Jesus's love in his eternal future.  I can literally see and feel the heavy weight lifted off his spirit and heart!
But that is not the end of the blessings.  We were able to share our experience with a group of true believers who received a new revelation of what deliverance and healing is all about, and what it means to be in the presence of Jesus and the Holy Spirit and to be at one with Them.  I believe that spiritual doors were opened and strongholds will be cast down.  Praise the Lord for giving us a picture that shows us He who is in us is greater than he who is in the world!

John 17:23    "I in them and You in Me, in order that they may become one and perfectly united, that the world may know and [definitely] recognize that You sent Me and that You have loved them [even] as You have loved Me."