The World Economy & The End Times

I don't have to tell you that the global economy is in a world of hurt.  The news cycles are full of stories of the woes of Wall Street, the devaluation of the Chinese Yuan, and the fears of further oil glut in the Middle East.  They are all intertwined to paint a very bleak economic forecast for the Seven Billion+ inhabitants of the planet.  And I can't help but see it in terms of my Biblical worldview, and End Times prophecies.  But how do the particulars of today's world economy play into the predictions that the Bible makes about Christ's return?
The Bible verse that speaks most clearly to me is Revelation 6:6 ... And I heard what seemed to be a voice from the midst of the four living creatures, saying, A quart of wheat for a denarius [a whole day’s wages], and three quarts of barley for a denarius; but do not harm the oil and the wine!  What this tells me is that at a time that Jesus calls The Great Tribulation, there will be great financial struggle and famine among the world's poor, while at the same time, there will those who enjoy great wealth.  Do we not see the rich getting richer, while more and more of the middle class are falling into poverty; that the chasm between rich and poor is getting wider and deeper?
If, like myself, you are a believer that the Bible is the inerrant Word of God (revelation of Jesus), and that He spoke prophecy into each of the writers of His Word, then it is Jesus Himself who is telling us that this will be the economic picture in the End Times.  And what is the common denominator mentioned in Revelation, and is also one of the primary factors controlling the world economy today?  It is oil! 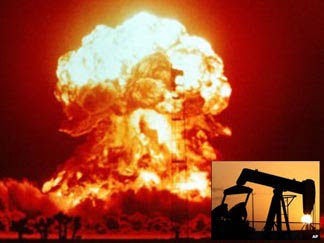 Can you see it?  Can you discern that oil is the stimulus that is driving the nations of the world into not only a battle for domination of the oil reserves, but into a final showdown and conflict at Megiddo in the Valley of Jezreel?  That oil and Armageddon are explicitly linked?
It should be obvious to everyone that oil is the energy-producing resource that every 21st Century nation needs to survive.  It should be equally obvious that the Middle East is Oil Central, so to speak, and the sectarian violence we are witnessing in the region has as much to do with controlling that resource as it does with warring religious ideologies.  That's why we see the growing presence of Russia and China in the area, and what ultimately drives the foreign policies of all the major nations.
Remember that Chapter 38 in Ezekiel prophecies that the force that instigates the Gog-Magog war will have "an evil thought" to not only "take a spoil", but to turn his hand "upon the people that are gathered out of the nations, which have gotten cattle and goods, that dwell in the midst of the land"; in other words, Israel.  I believe that "spoil" will be oil.  As writer, Terry James, so eloquently explains in his article, titled End Times Economy: Forecast of Last-Day Indicators:  "It cannot be mere coincidence that the Middle East region is where the planet was most lush--the place where the Garden of Eden was placed. If oil is, as most scientists believe, primarily decayed vegetation and animal matter that has decomposed, then this is the area where we might expect the greatest deposits of the substance we call oil. It must be more than mere coincidence, too, it follows, that this is the general region where all of the petroleum-hungry nations of the world would place intense interest. How much of a stretch is it, then, to believe that the forces of Gog-Magog would one day consider this region a chief target for invasion? And, carrying this logic to biblically prophetic conclusion, is it any wonder that Armageddon, involving most every nation on earth, will meet in this very region to do battle for the great spoil, the liquid black gold beneath the sand of the Middle East?"
Can you see it more clearly now?  America played a part in the birth of modern Israel, and we were blessed with new venues of economic markets.  Our alliance with Israel and our protection of the infant state, gave the U.S. presence in the region of planet earth with the deepest petroleum reserves.   We have also played a role in protecting the royal Saudi family, who held the keys to the most copious amounts of oil in the region.  This alliance also assured us that our western economy would continue to flourish, and we could keep the oil spigots open and flowing.
But now there are new players on the block.  The recent negotiations with Iran threaten to upset that apple cart, and now Russia is making its presence known in the region.  And we cannot dismiss the taste for oil that China's burgeoning industrial economy is demanding.  Can you see the nations of the world gathering, just as the Biblical prophecies predict?  Can you see that oil could be "the hook in the jaw" that pulls nations out of the north to the Valley of Jezreel (Ezekiel 38:4)?  Or that oil could be the impetus for a 200,000,000 man army coming from the East (Revelation 9:14-16)?
It is interesting to watch all the financial experts and their dire projections of an economic world collapse.  They are specifically focused on this world and how to avoid the coming breakdown of world banks and global economic institutions; how that will affect the world's financial systems.  We, Christians, who are not of this world, see it from a futuristic standpoint.  We see the failing world economy as inevitable; as prophetic, and as one more step towards the return of our Lord and Savior and the institution of a prosperous and glorious 1,000-year reign in His presence.
We must get ready ... times are going to be horrendous, and millions will die from famine, pestilence and war.  There is no way out of it; the Bible tells me so.  But we have just a little ways to go to get out of this corrupted world system and into His magnificent Kingdom.  Whatever comes, if we stay focused on Him, it will all be worth it.  Come quickly, Lord Jesus!

Revelation 16:14    "For they are the spirits of devils, working miracles, which go forth to the kings of the earth and of the whole world, to gather them to the battle of that great day of God Almighty."
Posted by Pam Kohler at 7:00 AM