I don't have to tell you that there is negative news everywhere we turn.  Those of us who discern the Scriptural implications know where this is all leading, and it may sometimes be difficult to keep our Hope before us.  So, I thought you might like to hear a couple of stories that will encourage our faith and trust in the future...
First, there is the story of Justin Anderson, an Iraq War veteran from Omaha, Nebraska.  Confined to a wheelchair after having his leg amputated and a bout with brain cancer, Anderson may have ended his career in the military, but he is not done serving his fellow citizens. 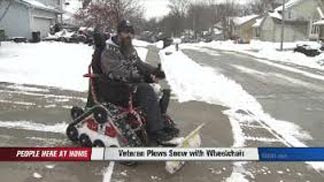 Last winter, Anderson converted his off-road wheelchair into a one-man snow plow. He added a blade to the front and used the chair’s on-the-fly tilt as a lever to adjust the blade as he pushed snow.  "I don’t want kids or parents having to go through the snow and possibly trip or hurt themselves," he said.  "It’s very gratifying. It’s nice to know you’re appreciated. But even if I didn’t get any response from anyone, or nobody said ‘thank you,’ I’d still do it."
Anderson gives credit to the city of Omaha for supporting him through his adversities, and claims that this is a way for him to "give back".  That is the attitude of so many veterans; they have already given far beyond what we could ever do to pay them back. And yet, they still want to give more.  Mr. Anderson truly has a servant's heart, and his labor for his fellow man will not be in vain.
Then there is the Utah police offer, who with fellow officers answered the call of a woman calling out for help, and found a car upside down in a flowing river.  Each of the four officers who responded each verified that it looked as if there were two adult people in the car, and they could clearly hear the voice of an adult woman.
They rushed through the running river, toward the overturned car, and Officer Tyler Beddoes explained that there was absolutely no question in his mind at the time that there was somebody in the car calling out for help.  “It was clear as day. There was no one else around,” he said, describing it as a “calming, clear voice ... It came from the car.” 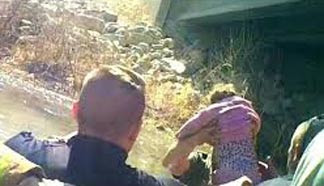 But after the four officers worked together to turn the car over, they realized something startling: 25-year-old Lynn Groesbeck was the only adult in the car, and she had likely died on impact 14 hours earlier; in the back seat, they discovered an 18-month-old baby named Lily, who was unconscious, but still alive at the time; Lily survived and is now doing very well, Beddoes said.
So who was the second adult in that front seat?  Could it have been an angel of mercy attending to Lynn?  Was it the voice of the angel that alerted the officers to the car, and the need of help for baby Lily?
Beddoes is not sure who it was; only that he and his fellow officers all heard the distinct voice.  But it couldn't have come at a better time.  Beddoes also explained that he had been facing a crisis of faith leading up to the rescue after being involved in an investigation of a quadruple homicide in which a father killed his kids, his wife and his mother-in-law — a case that he said “shook” his belief in God to its core.
“It really tested my faith … [I was] starting to doubt why would God let this happen,” he recalled, saying that he knows that he shouldn’t have felt that way, but was struggling at the time.  ”When this river rescue … came, my faith was not good. I was kind of in the dumps on a spiritual level.”  But he added ... "I don't have that doubt any more."
The final story that I want to share may have a tragic ending, but it is evidence of the goodness in man that evil cannot destroy.  On Wednesday, 21 people were killed at a Pakistani University by the Taliban.  Hamid Husain, 32, was a chemistry teacher at the university, and was known as "The Protector" to his students, because he always carried a pistol with him.
On Wednesday, Husain ordered his students to remain inside the classroom as terrorists invaded the school near the city of Peshawar, shooting students and faculty alike.  During the rampage, Husain, a father of two children, opened fired on the attackers, affording his students time to flee before he was shot down by Taliban assailants. 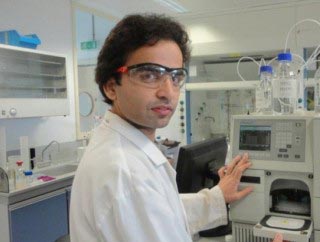 One of his students said that Husain "would always help the students, and he was the one who knew all their secrets because they would share all their problems with him."  And they all knew that he faithfully carried his 9mm pistol each day, and he showed that he wasn't afraid to use it to protect his kids.  Teachers in northwest Pakistan were permitted to carry firearms in the classroom after Taliban militants slaughtered more than 150 people, the majority of them children, at a school in Peshawar in 2014. That attack on the army-run school was the deadliest in Pakistani history.
And so, terror and evil attacked the Peshawar community again.  And one man had the courage to stand up to them and sacrifice his life to try to save the lives of those in his care.  Compassion in the face of wickedness; how difficult that is to imagine.
But I hope that each of these stories gives you a sense of Hope and the presence of a merciful and gracious God.  We are all made in His image, whether we are American or Pakistani.  It is our spirit that identifies with His Spirit, no matter if we have faith or not.  And sometimes our actions are not for our benefit, but for the benefit of others ... to introduce Him to someone who desperately needs Him; or to increase the faith of one who is doubting.  God can use any one person to reveal Himself to a dying world.  And all it takes is a glimpse of Him to ignite a spark that will grow into a holy fire. Meditate upon these individuals and see the Lord in each instance of these stories of service, miracles, and sacrifice.  The world may be coming undone, but we have much to look forward to!

Philippians 2:3-5    "Do nothing from rivalry or conceit, but in humility count others more significant than yourselves. Let each of you look not only to his own interests, but also to the interests of others. Have this mind among yourselves, which is yours in Christ Jesus"
Posted by Pam Kohler at 7:00 AM