It's A Great Time To Pray!

I feel like we are sitting on a big bubble that's about to pop.  And I'm not talking about any financial bubble -- even though the world economy is hanging on by a thread, and there seems to be no end in sight of the crippling debt; both for individuals and nations.
No, I'm talking about the escalating situations swirling around Iran.  It is not enough that they capture two Navy ships, detain our sailors, and broadcast a propaganda apology that highlights the failure of our government to maintain control of the situation (let alone save face).  In addition, the alleged cooperation between Iran and North Korea in constructing a nuclear warhead cannot be ignored.
The Washington Free Beacon reports that it believes that Iran is housing some of its key nuclear weapons-related technology in North Korea in order to avoid detection by international inspectors.  In fact, just a week ago North Korea claimed to have successfully tested a miniaturized hydrogen bomb, giving credence to lawmakers and regional experts who are warning that Pyongyang and Tehran are continuing an illicit clandestine partnership enabling the rogue nations to master nuclear technology. 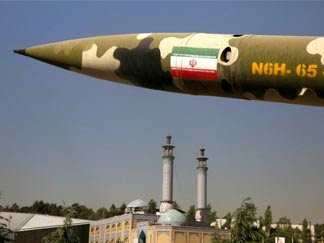 North Korea's boldness in executing the test has only served to encourage the recalcitrant Iranians.    One expert on the inner workings of the Iranian regime stated, "The entire world may well consider North Korea a failed state, but from the view point of the [Iranian Revolutionary Guard Corps], North Korea is a success story and a role model: A state which remains true to its revolutionary beliefs and defies the Global Arrogance."  Our sailors on their knees with their hands behind their heads is a pretty darn arrogant illustration of them thumbing their noses at us, don't you think?
So now you have Iran, fresh from humiliating the United States, being sneaky with their nuclear bomb activity, and the U.S. just days and hours from lifting the sanctions off the rebellious nation.  And then we hear the reasonable voice of retired Lt. General William "Jerry" Boykin, who tells us, "Whether you believe in prayer or not, could I suggest that this is a great time to pray for America and ‪Israel‬? Frankly, it is the only real hope that we have."  Is it really all that bad?  I'm afraid it is.
Because the sanctions have cost Iran more than $160 billion in oil revenue since 2012 alone, they are expected to resume selling oil on international markets and using the global financial system for trade.  Iran has the fourth largest oil reserves in the world and the energy industry is braced for lower prices, which will directly impact our economy, and not in a good way.  In addition, Iran will also be able to access more than $100 billion in frozen overseas assets.
But here's why General Boykin says that this Iran deal is so dangerous:  First of all, the U.S. and Iran cannot even agree what is in the deal.  The U.S. claims that Iran is in violation of the deal after recently firing two ballistic missiles.  Iran says the testing is not specifically mentioned in the deal, and therefore, they've violated nothing.  Secondly, Iran has never signed the deal.  So, seems to me that if a contract has not been signed, then neither party owes any accountability to the other.  And although Congress will vote in a week or so on imposing new sanctions, that's most likely a dead-end street, too, with a President who is quick to remind everyone that he has the power of the pen.
As if this is not enough, we need to recognize that Iran is a dangerous detriment to world peace.  Iran has rejected any international inspection of military sites that are thought to be developing nuclear technology (threatening war if any attempt is made), giving them free reign to proceed with their nuclear projects.  Add to that, their consistent shouts of "Death to America" and "Death to Israel" does not speak to a desire for peaceful relations; nor does their reception of Russian S-300 missiles.  And if anyone in the world is naive enough to think that the money they will receive from the U.S. will go to economic relief, rather than to support Iran's ongoing affiliations with terror groups throughout the Middle East, then General Boykin is right --- we don't stand a chance without prayer.
So, at this late date, it certainly appears that Iran will proceed with its nuclear program with no regard for any "deal" with the United States.  And they have made their hatred for us and Israel quite well known over the  last few years.  They have vast influence over the sectarian strife throughout the Middle East, and in just a few days, we will be handing over $150 billion of our money to help them further all their causes.  Does that sum it up for you?
Where this all leads, I simply do not know.  But it sure seems to me that Iran is running headlong towards their apocalyptic goal, unabated and uninhibited.  But for now, I suggest that we all follow General Boykin's advice and PRAY!  After all, he is one of the original members of the US Army’s Delta Force; the former Commander of the Army’s Green Berets, as well as the Special Warfare Center and School; and the former Deputy Undersecretary of Defense for Intelligence -- all prestigious military titles that speak to his understanding and comprehension of these times in which we live.
But he is also an ordained minister, and it is his command and grasp of that job position that qualifies him to tell us that prayer is the only real hope we have.... I suggest that we follow his orders, and hit our knees!