You know how you sometimes have that nagging thought at the back of your mind, but then you think perhaps you are reaching a bit --- until someone else proposes the same thought with equal passion, and you know it is an affirmation from God?  That's what happened to me this morning.
As usual, I start my day off with personal time in my Bible as I commune with God, trying to gain a bigger, and more intimate, knowledge of Him.  I was reading the Book of Proverbs, specifically Chapter 7, and I was instantly impacted by the vision the Scripture presented.  On the surface, the text was describing the advice that a loving father was giving to his son... to keep and treasure the commandments of the father; to cling to wisdom and understanding and insight, in order to avoid the enticement of "the loose woman", who was not only a "fallen woman", but sly and cunning of heart; turbulent and willful. 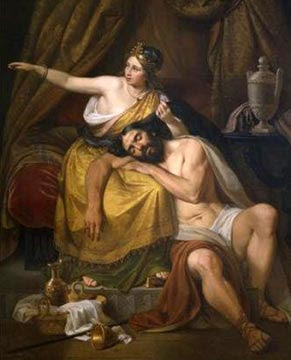 This "harlot" was seen as bold and adventurous, blatantly tempting the son, and impudently offering herself to him without hesitation.   She lures him to come home with her and make love on her luxurious couch and cushions of tapestry, with striped sheets of fine linen of Egypt.  She teases his senses with the suggestion of a bed perfumed with myrrh, aloes, and cinnamon.  She assures him that the good man of the house is not at home; that he has gone on a long journey and taken his treasure with him, only to return home at the appointed time.
Then Proverbs tell us that "with a justifying and enticing argument she persuades him, with the allurements of her lips she leads him [to overcome his conscience and his fears] and forces him along into her house.  Suddenly he [yields and] follows her reluctantly like an ox moving to the slaughter, like one in shackles going to the correction [to be given] to a fool, or like a dog enticed by food to the muzzle, until an arrow [of passion] pierces and inflames his vitals; then like a bird fluttering straight into the net [he hastens], not knowing that it will cost him his life."
I knew, with a sinking heart, that this was an accurate analogy for the path our country has taken; and sadly, the experience of too many Christians who have been enticed to abandon the commands of God in order to follow the harlot and what the world has to offer.  I know I am not the only one who sees it.  And sometimes I think that my justification for this opinion falls on deaf ears.
But then someone else speaks up with a voice much louder than mine.  Today it is Naghmeh Abedini, the wife of imprisoned Pastor Saeed Abedini.  She says God has shown her how Satan is lulling the Body of Christ to sleep; that many Christians are befriending the world, seeking fame and popularity before all else.
Naghmeh is in the midst of a three-week fast to refocus her relationship on God.  "A main theme during my time of prayer and fasting seems to be becoming aware of our (my) friendship with the world as followers of Christ," Naghmeh writes. "I am being made more and more aware of how we (including me) are allowing its subtle ways get to us and it is putting the body of Christ to sleep." 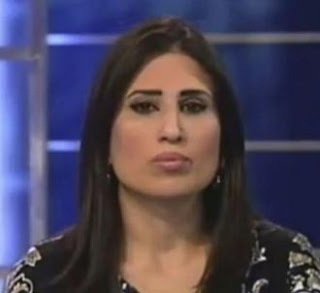 And she has seen a much broader view of the world than I have; traveling around the world in recent years, campaigning for the release of her husband, Saeed, who is imprisoned in Iran.   "My travels over the last 3 years have opened my eyes to the condition that the Body of Christ is in. Pursuing fame, wealth and 'followers/numbers' has become normal in the Christian world. We are becoming like the world and we are totally Ok with that. Yet the Scripture has serious warnings, even calling us ENEMIES OF GOD."
Whether, we see ourselves as the foolish and tempted son of a faithful and sovereign father [in Proverbs 7], or as the Body of Christ being lulled to sleep in Naghmeh's vision of the Church, the message is the same ... we are ignoring the teachings and commands of our God, and have strayed onto the path that the harlot has so cleverly offered us.  As in the Proverb, she has offered to let us share with her the feast from her "peace offering".  But if we Christians understood what this offering symbolized, we would know that it is to be dedicated to God in full; that we must not think we are worthy or equal to share in what is the Lord's.  The peace offering is to be an acknowledgment of being made whole through the peace of knowing and experiencing God's forgiveness, and it signifies the peace that Jesus's sacrifice brings us -- we have no right to "share", or take credit for that offering.  But, just as the harlot deliberately sought the son, so has the Enemy ensnared us to share in his blasphemous feast.
I guess the thing that is most clear to me is that we, who can see, are seeing clearly and with great spiritual discernment.  We are solemnly aware that the harlot -- this shiny, tempting, alluring world -- has led us down her path, and her victims are countless.  For me, the sad climax to this analogy from Scripture, is that just like the wayward son, and Naghmeh Abedini's sleeping Body of Christ, the harlot's house "is the way to Sheol (Hades, the place of the dead), going down to the chambers of death" ... and how many do not know that following her will cost them their [eternal] lives?

Thank you to Charisma News for the report on Naghmeh Abedini.

Proverbs 7:6-8     "For at the window of my house I looked out through my lattice.  And among the simple (empty-headed and emptyhearted) ones, I perceived among the youths a young man void of good sense, Sauntering through the street near the [loose woman’s] corner; and he went the way to her house."

Email ThisBlogThis!Share to TwitterShare to FacebookShare to Pinterest
Labels: Satan's Dominion, The Bible