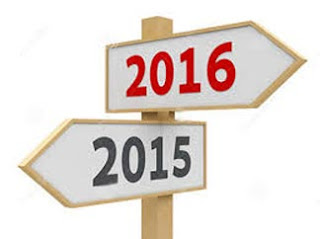 As I reviewed my posts over the last year and took a look back over the top news stories, it became quite clear that in 2015, spiritual matters were front and center.  Whether it was Winter Storm Juno that began the year with a tidal wave of snow and crippling blizzards, or the way we are ending 2015 with a raging storm named Goliath, one has to wonder if these mega-weather events are part of the geo-engineering phenomena or judgments from God. (I find the choice of names curious -- a goddess of war and fertility; and a nephilim giant, a descendant of the union between fallen angels and human women.  Nothing in this world is done by accident, so I am left wondering the significance of these selected names).
The major news headlines definitely speak of the ongoing battle between the spiritual realm and the world in which we live.  Just let your soul feel what comes to light as I recall these events:  the rise of ISIS ... Charlie Hebdo ... the Charleston, NC church shooting ... Paris concert hall shooting ... San Bernardino ... the European refugee crisis ... the Iran nuclear deal ... the racial tension and division in Ferguson, Chicago, and Cleveland ... the Planned Parenthood scandal ... gay marriage and transgenderism ...
Do you see it?  These are a random selection of the top news stories of 2015, yet I assert that each of them is the result of direct influence from what the Apostle Paul refers to as "[the master spirits who are] the world rulers of this present darkness, [and] the spirit forces of wickedness in the heavenly (supernatural) sphere."  It is becoming apparent to me, at least, that these forces are causing an increase in man's natural sin state and contributing to a reprobate mind that has led to all the bloodshed, violence, racial hatred, moral decay and unprincipled deception that we see all around us.
It is apparent as we see a connection forming between Science and Sin in the development of transhumanism; in the expansion of forced vaccinations; and in the evolution of CERN, who appears to be trying to recreate a "Tower of Babel" scenario and unlock the gate to Heaven.
And I certainly think we are seeing the implications of the Beast System talked about in the Bible. From the overwhelming amount of data collection, to chip implantation, to companies being run out of business because of their faith, to climate and gun control agendas, to Agenda 21 and 2030, to Global Government in the form of Strong Cities and Sanctuary Cities -- they all lead to oppression and the dehumanization of mankind. And it will all be orchestrated through the Deception, Division, Diversion, and Discouragement of Satan and his servants.
And caught in the cross-hairs will be the followers of Christ.  This year has seen an unprecedented increase in persecutions against Christians; from Niger in Western Africa to the Christian communities in Iraq and Syria, they are being martyred for their faith -- and willingly sacrificing their lives to torture, rape, crucifixions, and beheadings, rather than deny their allegiance to Jesus.  To think that we Christians in the West will be spared (or deserve to be!) is not Biblical.  This is the year that has shown us that we better know where we stand with God.
Which brings me to the topic of the Church.  We have seen the Body of Christ struggle this year with fulfilling its commission.  And I have to ask if it is remaining true to the commandments of God.  Each Christian must answer for himself if his Church represents the Biblical principals laid down by God and if they have answered His mandate, which is to let the Holy Spirit guide the Church into affecting everything around it -- from their city, to their country, to their continent, to the rest of the world.  Sadly, I have come to the conclusion that most churches in this nation, at least, rarely affect anyone or anything outside their church building, if that.  And that is why I have seen a growing remnant of God's people being called out of the confinement of those four walls to listen to and follow the "dunamis" power of the Holy Spirit, which comes by the authority of Christ and strengthens us and gives us the ability to continue His work in the world.
Which brings me to my final conclusion regarding this year.  As I perused each of my 359 posts for the year, I noticed a decidedly common thread amongst them.  This past year I felt my faith more intensely than ever before.  The worry and anxiety over world events and comparisons with Biblical prophecies sent me into intense periods of testing.  But with this reflection and introspection, I came out on the other side, with my faith strengthened and with a more dynamic relationship with the Holy Spirit.  I have personally witnessed His power this year and how He works with Jesus to heal us and free us of our bondage to the Enemy.  That has resulted in a bolder and more daring faith; one that has released me from the "comfort zone" of my Western Christian experience.  And I am discerning that this is where I will need to be in order to persevere and grow in 2016.
I'm pretty sure that many of you have taken this same journey as I during the last year.  And it is exciting to be expanding my boundaries and territory for the Kingdom of God.  Whatever the next year brings, I am grateful for the news, both good and bad, from this past 12 months.  We have learned much about ourselves and the power of God, Jesus and the Holy Spirit.  It will keep us steadfast in our faith as we go forward together; strengthening and encouraging each other for whatever this world throws at us.  So long, 2015 -- we are revived and ready for 2016!

Romans 15:4    "For whatever was written in former days was written for our instruction, that through endurance and through the encouragement of the Scriptures we might have hope."
Posted by Pam Kohler at 7:00 AM