Prophecy In The Headlines

As we approach the New Year, I can't help but feel that we are all going to witness a new reality in world history.  As you know, while I have to live "in this world", I try not to be "of this world".  That means that I always have one eye on what world events seem to be showing me in relation to Biblical prophecy.  Those who cannot understand this perspective, will simply blow me off as failing to see the rational and logical reality of their man-centered viewpoint. 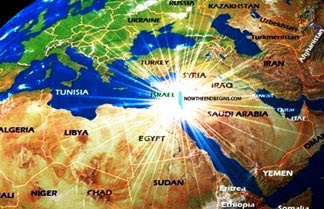 That is why so many people are caught up in politics and social movements as the answers to the world's problems.  They do not understand the spiritual connections to all the chaos and war in the Middle East, the increasing fanaticism and violence caused by terrorists, or the attempts to intensify racial and cultural division within our society.  Even if they were able to identify them as the strategy of our Enemy to extend his power and bondage over the human race, it is difficult for them to see specific illustrations in the Bible that correspond to current events.  That is part of the devil's attempts to cast doubt upon God's Truth.
But there were two specific headlines that jumped out at me over the last day or two.  Both articles appeared on Walid Shoebat's website.  He is a Palestinian American who converted to Christianity from Islam. Shoebat stated he used to be a Palestinian Liberation Organization terrorist in a CNN television interview.  While he is a controversial subject to those who want to discount his message, his Middle Eastern background provides a perspective that we in the West do not have.  So when he runs what are, essentially, two back-to-back articles this week with headlines that say, Erdogan Has Just Been Declared The Leader Of The Entire Muslim World, Muslims Are Already Calling Him God; and the equally interesting By Peace They Will Deceive Many: Agreement With Turkey ‘Close’, Says Israeli Foreign Ministry Head, then I sit up and pay attention.
Are these forecasting the possible fulfillment of Biblical prophecy?  I am not qualified to make that declaration.  But as a Christian, I am aware of what my Bible tells me will occur as the world approaches the End of Days.  The Old Testament prophet Daniel tells us that there will be a king who rises out of a confederation to "depose kings and raise up others", and "The king will do as he pleases. He will exalt and magnify himself above every god and will say unheard-of things against the God of gods. He will be successful until the time of wrath is completed, for what has been determined must take place."
Then the New Testament apostle Paul tells us that there will be a Man of Lawlessness, "Who opposes and exalts himself so proudly and insolently against and over all that is called God or that is worshiped, [even to his actually] taking his seat in the temple of God, proclaiming that he himself is God."   So, we have two divinely-inspired men, born over 600 years apart who verify each other's visions and prophecies.  Add to that the recent developments in Turkey and the growing power of President Erdogan, who is setting up his own system of government, and it should certainly give us pause.
Consider the recent statement by Erdogan's "fatwah-giver" Hayrettin Karaman (remember a fatwah is "a ruling on a point of Islamic law given by a recognized authority", which in this case is Erdogan, himself):

“During the debate on the presidential system, here is what everyone must do so while taking into account the direction of the world’s national interest and the future of the country and not focus on the party or a particular person. What this [presidential system] looks like is the Islamic caliphate system in terms of its mechanism. In this system the people choose the leader,  the Prince, and then all will pledge the Bay’ah [allegiance] and then the chosen  president appoints the high government bureaucracy...". 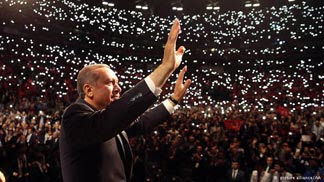 We must take into account, President Erdogan's recent declaration, in which he proclaimed, "I am a leader of a political movement."  That may sound rather vague and benign to the Western ear, but it has profound implications in the Muslim world.  As the Turkish website Today's Zaman reports, "In calling himself “leader of a political movement,” Erdoğan is reaching out to a wide spectrum of people, one that stretches from moderate conservatism to radical Islam. He is using rhetoric that taps into the rich history and political traditions linked to Islam. The controversial theories of political Islam show us what we need to grasp from the phrase “leader of a political movement... According to the general theory of political Islam, the relationship between those who lead and those who are led is based upon a “contract of allegiance.” Those who are led declare, via their representatives, that they will obey their leader, thus surrendering all of their political rights -- unconditionally -- to said leader. And so the contract draws up the parameters for both sides: The leader will lead justly, while those who are led will be obedient. In the meantime, within the traditions of political Islam, those who use their power in this way are called “caliphs.” And a caliphate is, for leaders who rely upon religious references in the Islamic world, the name of the system that they will inevitably turn towards."
Granted, there have been many leaders throughout history who have appeared to resemble this man of lawlessness.  But when Erdogan and his party suffered a major setback earlier this year when they lost their majority hold on the parliament, many predicted his disappearance from the pages of history.  But Daniel 11 prophecies that the Man of Lawlessness will "come up and become strong with a small number of people."  And Erdogan has done just that, managing to defeat three other major parties within his government to exert the power he now professes.
Furthermore, Erdogan matches the Biblical prophet Habakkuk's description of the Man of Lawlessness (or dare I say, Antichrist) as “the Proud Man” who “enlarged his desires as hell, and is as death, and cannot be satisfied, but gathereth unto him all nations, and heapeth unto him all peoples” (2:5). Erdogan is definately a “proud man” who desires to “gather unto him all nations” in his neo-Ottoman Caliphate dream to unite the Muslim world. He denies Father and Son (1 John 2:22) and “does not honor the God of his fathers” as Turkey at one point in time was Christian.  The December 27th article on Shoebat.com provides many more Biblical similarities that are due your examination and deliberation.  They are hard to dismiss.
Add to this Shoebat's report that Dore Gold, Director-General of Israel’s Foreign Ministry, gave a rare interview to a Saudi website, in which he stated that an agreement with Turkey on normalization of ties was close.  “Some points have already been finalized and others are still being discussed, but things are on track.”  Gold added that “the interests of Turkey and Israel at this time are finding a lot of common ground due to regional events. Things are headed in a positive direction towards a solution to satisfy the desires of both parties, but there is still no date for a final agreement to be reached.”  Is this the seven-year "covenant", about which Daniel prophesied?  In full disclosure, the Erdogan government's official comment is, "while progress was made in talks, no agreement has been reached."
And to be completely honest, I want to be very careful about reading too much into these news stories.  I do not want to get caught up in "predicting" the future or claiming to know God's timeline.  But I also discern that I am to be "awake" and prepared to minister to both unbelievers and lukewarm Christians, should God determine that our generation will be blessed to see the appearance of the Antichrist and the return of our Savior.  I am to know the signs and the seasons and be prepared to preach the gospel message at all times.
So, whether 2016 will see these two stories accelerate these Last Days, or not, remains to be seen.  I have long felt a "tension" in my spirit regarding Turkey, and see clear reason to keep my spiritual antennae up when it comes to their activities.  They always seem to be in the background of front page headlines, and I believe there is more going on there than we are allowed to see.
But, I want to encourage you not to become anxious or worried about potential prophetic fulfillments.  God will make it clear to our spirits when the Day of the Lord is at hand.  Let us remain steadfast in Him, declaring our allegiance to the One True God, and employing our full armor against the deception and strategies of the Enemy.  Then the headlines won't matter; we will be one step ahead of the dark forces, and one step closer to our reward.  And that's what truly counts.

2 Thessalonians 2:11     "Therefore God sends upon them a misleading influence, a working of error and a strong delusion to make them believe what is false..."
Posted by Pam Kohler at 7:00 AM