What Do You Know About "Grave Sucking"?

Strange question, huh?  If you're like me, you knew nothing about it.  But apparently this is a distorted view, among some Christians, of the spiritual powers that are available to us through our faith in Christ and the indwelling of the Holy Spirit.
I have shared with many through this blog, and through personal relationships, the direction that God is taking me in regards to spiritual matters.  Both my husband and I have discerned from our many hours of Biblical study, and listening for the Lord's guidance, that we Christians are engaged in spiritual warfare, whether we acknowledge it or not.
This new awareness has led us to the Scriptural knowledge in the Gospels and throughout the New Testament, that Jesus has empowered us with the Holy Spirit to partner with Him in continuing to carry out the works He did in the Father's will, while on earth.
This is oftentimes (actually, most of the time) met with skepticism or resistance by the traditional Church.  I can understand that... this insight has not been taught nor encouraged in the Western Church.  The thought of real demons afflicting Christians is a foreign concept, and one that just doesn't fly in the face of our "God is Love and Grace" and "Prosperity Gospel" messages.
Yes, God IS Love, and He DOES pour out His Grace and Mercy on us, but the Devil is real, too, and if he can deceive us into dismissing this piece of our Christian walk, then just think of all the havoc he can cause in our lives!  Or better yet, if he can substitute a false teaching... but one that mimics (and resembles) our authority from Christ and the power of the Holy Spirit in our lives, then he can lead Christians down a path away from true Biblical instruction and towards an unholy indoctrination and empowerment.  Such is the case with a phenomenon known as "grave sucking", or "grave soaking". 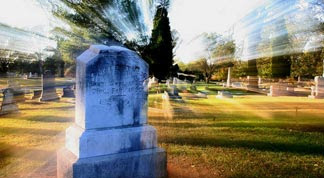 It even sounds evil, doesn't it?  And to be honest, I had not heard of it until my husband brought it to my attention, and apparently it is a very real practice among those who think that it is Biblical.  Just what is it exactly?  I found the following description on a website called Youth Apologetics Training, which seeks to help teens understand and defend Christianity -- which tells me that this strange practice may be gaining popularity among our younger Christian population.  The website debunks the unscriptural and unholy exercise, and explains what it is:  Grave sucking, or "mantle grabbing", is the belief and practice of pulling the supposed Holy Spirit powers from the dead bones of a previously empowered believer.  It is taught that when a Spirit-empowered individual dies, their mantle or mission dies with them.  In other words, God’s mission for that believer was thwarted when that believer died.
Maybe that believer had a gift of healing.  Maybe they were an apostle, prophet, evangelist, teacher, had the gift of serving others, or of encouragement.  From my understanding, there are those in the Christian community that believe, with that person's death, God’s plans for that particular anointing are placed on hold.  So, how does God correct this and get his plans back on track?  They actually suggest that we, as believers, must find a way to retrieve the mantle, or anointing, from the rotting corpse six feet under.  Only then can we get God’s plans back on track.  This is achieved by placing hands on the gravestone of the deceased, or lying on top of the grave.  Sometimes a prayer will be offered to God to aid in this perceived power transfer.
How perverted and unholy is this exercise?  As if God Almighty actually needs us to intervene and claim His lost anointing, and bail Him out and get His plan back on track!  What happened to the Sovereignty of God in that whole messed up scenario?  And doesn't it suggest that the Holy Spirit is trapped inside that dead body, is confused, and doesn't even realize the person is dead -- that is, until He senses someone above ground seeking that untapped spiritual power and just decides to give them the supernatural God-given abilities?  Doesn't that belittle the Holy Spirit?
How can anyone who calls themselves a Christian believe in this?  But, remember, our kids have grown up in a generation that promulgates wizards, vampires, zombies and the soft-sell of the occult. This would make sense to them.  And where do they find the evidence that this bizarre understanding is Biblical?  The whole foundation is based on one verse in Scripture:  (2 Kings 13:21)  And it came to pass, as they were burying a man, that, behold, they spied a band of men; and they cast the man into the sepulchre of Elisha: and when the man was let down, and touched the bones of Elisha, he revived, and stood up on his feet.  Supporters of grave sucking suggest that the man lived because there was power left in the bones of the prophet Elisha.  But this "charismatic" teaching is reaching way too far; even to the point of being ludicrous. First of all, it distracts from the One True Source of our anointing.  All anointing comes from God, and it cannot be "transferred" from one person to another.  Secondly, the idea that any God-given gifts can be imparted from the body of a dead person is taught nowhere in the Bible -- no matter how hard someone might try to distort 2 Kings 13:21.  I'm not saying that God couldn't extend a generational legacy from one person to another, but it would be a Divine appointment, not obtained from "sucking" the power or gift from the grave!
Then, there is our Biblical knowledge that when believers are absent from the body they are present with the Lord (2 Corinthians 5:8).   Doesn't this tell us that our spirit leaves our body when we physically die?  The Holy Spirit that was imparted to a believer is no longer on the earth, and thus that Divine power is no longer in the grave.  Any attempt to retrieve a spirit or power from the dead comes perilously close to necromancy, which is defined as communicating with the spirits of the dead, which in turn involves witchcraft, sorcery and black magic.  Who would want to take the risk that you could conjure up a spirit from the dark side?
Furthermore, this unholy practice threatens to further divide the Body of Christ by discrediting any experience of the power of the Holy Spirit in a Christian's life.  I have personally witnessed the Holy Spirit at work in a person's life, and the power He has over demonic spirits.  But it was all done through the authority of Jesus, and the power came from the Holy Spirit --- not from power being summoned and transferred from one person to another.
There is nothing in the Bible that tells us we can "absorb" the spiritual gifts from another.  And I like how the Apologetics website for teens disproves this unscriptural teaching:  "In this view of the Father [and "grave sucking"], we have a God who both gets His plans foiled because His Holy Spirit-empowered followers die; and then to make matters worse, He forgets to tell His believers how to resume His plans by retrieving the powers from a grave site.  Then, it takes God several thousand years to realize He goofed and reveal this new information to His modern day “prophets”. "  See how ridiculous the whole concept sounds?
The sad thing is that kids (and some adults) are being easily deceived to follow this unholy practice.  If they would just study their Bible, they would realize that there is no foundation for this concept in the Bible, and that it does not fit the Divine Nature of God.  Why would God tell His followers to lie down on an unclean grave site to receive a lost portion of the Holy Spirit?  He is Greater than that and does not need our intervention to fulfill His purposes here on earth.  I find it incredible that people who call themselves Christian could be so deluded and confused about who God is and how He acts in our lives.  This is just another sign that Satan's power to deceive is getting stronger ... even in the Church.

Isaiah 8:19     And when they say to you, “Inquire of the mediums and the necromancers who chirp and mutter,” should not a people inquire of their God? Should they inquire of the dead on behalf of the living?